A German software company with annual revenues of more than $55 million is considering moving its U.S. headquarters from New Windsor to Beacon.

Representatives from DocuWare, a document management/digitization firm founded in 1988, told the Beacon City Council on Monday (March 26) that it is pressed for space at its offices near Stewart International Airport and has been searching for a location with a walkable downtown for its 60 U.S. employees. They said the company is in preliminary discussions with property owner Joe Donovan to lease space to create an industrial complex at the corner of Main and Route 9D. 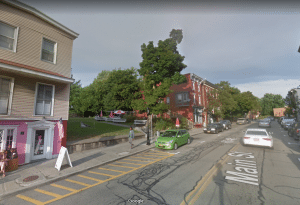 The company’s Main Street complex would wrap around the corner to Tito Santana at 142 Main. (Google Maps)

DocuWare’s board of directors will vote on the move later this year, said Thomas Schneck, a company executive based in New Windsor.

“We have a lot of employees who have families and we’re looking for a place where those families can be raised,” Schneck explained. “What’s important to us is a very good school system and we have heard a lot of good things about Beacon.” He cited Metro-North and the city’s transportation options as part of its appeal, as well.

With offices in Munich, Bulgaria, the U.K., Spain and Paris, as well as in New Windsor and Wallingford, Connecticut, DocuWare has 18,000 clients worldwide, including Ikea, Kellogg’s and Sony. Along with document management, it helps clients with workflow and operational efficiency. 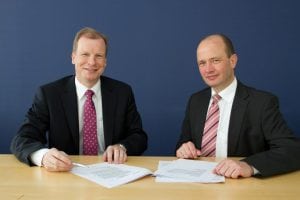 Thomas Schneck and Jürgen Biffar are presidents of DocuWare, which has headquarters in Germany and New York. (DocuWare)

The company, which approached Beacon Mayor Randy Casale last year about the potential move, represents the type of “light industry” that city officials have long believed would bolster the local economy.

“These smaller companies are the companies of the future,” Casale said. “And because we’re becoming a community that’s walkable and bikeable, where there’s a lot to do, people want to live here. People are starting to come to us because they like Beacon.”

DocuWare anticipates having 80 to 100 employees in the next three to five years, Schneck said, although not all of them would move to Beacon.

In addition, the firm hosts monthly and quarterly training workshops that would bring hundreds of visitors to the area.

The company’s Main Street complex would include an empty two-story building on Route 9D and wrap around the corner to the Tito Santana restaurant at 142 Main. The Beacon Creamery at 134 Main St. would likely be torn down, said Donovan, who shared what he called “very preliminary” plans with the council.

The complex would include 6,000 to 8,000 square feet of retail space, with DocuWare occupying the middle floors and four to five apartments filling the top floor. Donovan said the buildings would be roughly the same height as those occupied by Tito Santana and Mountain Tops Outfitters, which he also owns.

“We’re sensitive to the idea that it should look like it belongs on Main Street,” he said. “But exactly how we do that will take some work.”

One thought on “$55 Million Software Firm Looking at Beacon”