There’s an “18-carat” gem that every golfer in the Highlands, whether civilian or military, may want to add to his or her calendar.

The 18-hole West Point Golf Course, which is open to the public, is not long, at 6,008 yards from the long tees and 5,000 yards from the middle tees. Those in the know, however, don’t sell it short. Its mountainside location, adjacent to the academy’s ski hill, features ups, downs, creeks and lakes that provide a serious challenge, along with beautiful vistas. Golfers also praise the top-notch maintenance that produces slick greens and perfectly manicured fairways. 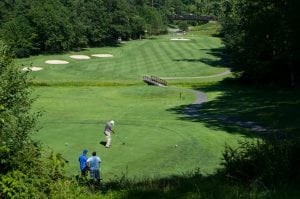 The West Point Golf Course is known for its excellent grooming and up-and-down terrain. (U.S. Army)

Like the rest of the West Point campus, the course is steeped in history. It was designed by Robert Trent Jones and opened in 1948 after German prisoners of war assisted in its construction. Each tee marker commemorates a milestone in U.S. military history, from the American Revolution to the war in Afghanistan.

The course is part of PGA Ameria’s Helping Our Patriots Everywhere (HOPE) program, which introduces veterans, especially those with disabilities, to the game. Dave Marion and Mike Cullinan, who both live in Cold Spring, met three years ago at a village cafe and quickly discovered they had at least two things in common: both are veterans, and both love golf. Marion, who is a graduate of PGA HOPE, introduced Cullinan to the program. They now see each other regularly on the West Point links.

Marion, who served three tours in Vietnam, said he was particularly impressed by the professional golfers who volunteer their time as instructors. “When I was in the program at West Point there were 30 golfers and 25 pros to help us,” he said.

Nearly every veteran in the program has a disability such as impaired hearing or vision or post-traumatic stress disorder, he said. “I golf with a double-leg amputee who is nearly a scratch golfer. Another who is legally blind had a hole-in-one.” 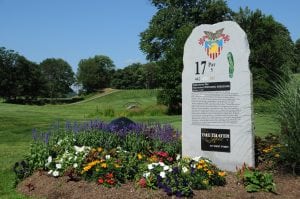 Tee markers commemorate major wars in which the U.S. has fought. (U.S. Army)

Cullinan, who served in the Navy from 1960 to 1962 aboard the USS Oriskany, completed the PGA HOPE program in 2016. “I like the camaraderie; it’s great to be able to associate with other veterans,” he said. He noted that the West Point course is no walk in the park. “I’m a 20- handicapper and it’s tough, especially the up-and-down landscape,” he said.

Amy Hahn, a recreational therapist at the Veterans Affairs hospital in Montrose, coordinates PGA HOPE at West Point. To graduate, she said, a veteran must complete five days of golf lessons. He or she is then honored at a dinner with a free set of clubs and can play free or at a discount at many courses around the country.

Did It All Begin in New York?
Guide to Local Links

PGA HOPE can accommodate up to 36 veterans at each of two annual sessions; the next one begins Aug. 22. Email [email protected]