Power has been restored and roads have been cleared in the Highlands after the brief but devastating storm on May 15, but for local farms, the recovery continues.

“We’re back where we were four years ago,” said Sarah Simon, farm director at Common Ground Farm, which is located at Stony Kill Farm just north of Beacon. The storm destroyed the 4-year-old high tunnel that the farm had been using to improve tomato production in the warm months and grow produce into the winter. 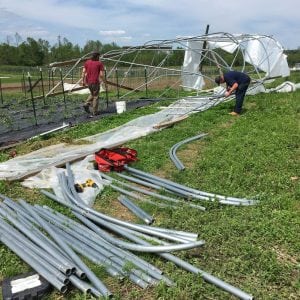 The storm also uprooted trees, blew apart the farm gate, ripped holes in the fencing, destroyed several smaller greenhouses and sheds and flooded one of the fields.

Down the I-84 corridor, things were worse in the 100-year-old apple orchards at Fishkill Farms.

“We lost between 3,000 and 4,000 trees,” said Josh Morgenthau, its owner. “It was faster winds than we’ve ever experienced before. Most of these trees were broken at the base so there’s nothing left to rehabilitate. Those trees represent a decade of investment and hard work by our team, and to see it all wiped out in just a few minutes is devastating.” 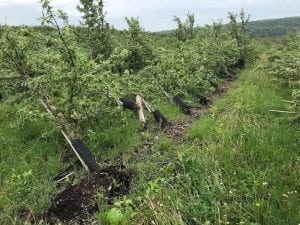 Rows of trees were uprotted at Fishkill Farms. (Photo provided)

Simon and her crew were in the fields when the storm rolled in, working to plant scallions in time for the rain. Although the crew received emergency tornado warnings on their phones, they didn’t think anything of it since the warning was for the entire Hudson Valley, and tornadoes in southern Dutchess County are practically unheard of. They even joked about taking shelter in the walk-in cooler that the farm uses to keep harvested produce fresh.

A downburst occurs when super-cooled air in a thunderstorm sinks rapidly to the ground. As it hits, the air is forced outward and also curls backward. Downbursts often produce straight-line wind damage over a relatively small area.

Tornadoes form from the interaction of warm, moist updrafts pulled into the thundercloud, while dry air cooled by rain descends. The swirling vortex is the result of their interaction, and the damage patterns show the swirl.

When the storm began, Simon and her crew retreated to the greenhouse.

“The wind was just crazy,” she recalled. “Then all those trees started to fall.”

They ended up in the cooler, after all, emerging to find the high tunnel destroyed and an electrical fire across the street. Because fallen trees had blocked the roads, Simon walked home to Beacon.

It could have been worse: When Hurricane Irene hammered Common Ground Farm in August 2011, the fields were full of produce on the verge of being harvested, the majority of which was wiped out. Since the macroburst happened early in the growing season, much of what was lost can be replanted thanks to the abundance of vegetable starts that many farms still have at this time of the year. Meadowland Farm in Clinton Corners has already volunteered to replace the tomato starts that were destroyed. 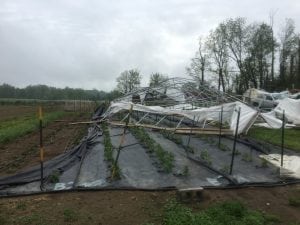 But the loss of the high tunnel is a significant blow for the farm, and will hamper its ability to continue growing food for schools, food pantries and soup kitchens. The nonprofit is hoping to raise $15,000 for a new, stronger high tunnel.

Since the organization farms on land owned by the state Department of Environmental Conservation, which has been on site clearing trees, they’re still waiting on the go-ahead as to when they can reopen the farm to hold its popular preschool program.

“I’ve had to cancel everything last week and this week, and that’s a chunk of revenue,” says Sember Weinman, the farm’s education director. “On the other hand,” she said, pointing to a tangle of downed trees and limbs smothering the grove, “that’s not exactly toddler-friendly.”

In Fishkill, with the road cleared and power restored, Fishkill Farms is again open for business. “It looks like the cherries, peaches and nectarines are OK,” Morgenthau said. “And it’s looking like we’ll be able to open up for pick-your-own strawberries in two weeks.” 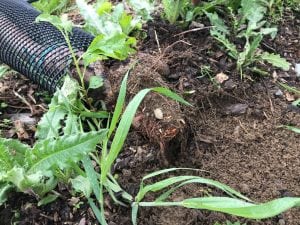 A tree snapped off at Fishkill Farms. (Photo provided)

However, the farm will have to decrease the amount of apples available for wholesale this fall and in autumns to come. “It’s going to take us years to get back to our previous level of production,” he said.

At Common Ground Farm, the team has held one fundraiser and is looking for volunteers who can help rebuild the other structures or make deliveries to food pantries. They’re encouraged, also, as some of the resiliency measures that the farm put in place are paying off. Although Common Ground Farm has 10 acres, they only farm on 4 at a time, letting the rest go fallow with cover crops to rest and recharge the soil. While other fields lost valuable topsoil to the storm, the deep roots of the cover crops held the Common Ground soil in place.

“It’s been a really interesting and informative moment for me as a farmer,” said Simon.

One thought on “Weathering the Storm”