The American Lung Association, in its annual State of the Air report, gave Putnam and Dutchess counties a “D” for air quality, while Westchester got an “F.” 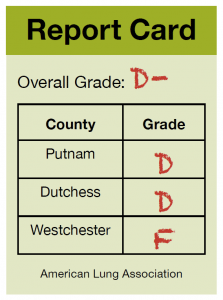 The nonprofit measures ozone and particle pollution, both of which have grown worse because of the effects of global warming.

The state Department of Environmental Conservation also tracks pollutant levels. In its daily forecast for May 24, it rated the levels in Long Island and western New York as “moderate,” which is just below “unhealthy for sensitive groups.” The remainder of the state was “good.”

Ozone develops in the atmosphere from gases from tailpipes, smokestacks and other sources that form smog when they come in contact with sunlight. “Inhaling ozone pollution is like getting a sunburn on the lung,” the association said, noting it can trigger coughing and asthma attacks.

Particle pollution is the result of wildfires, wood-burning devices, coal-fired power plants and diesel engines. The microscopic particles can trigger asthma attacks as well as lead to heart attacks, strokes and lung cancer, according to the association.

Eight of the 10 cities with the most particle pollution were in California, with Phoenix-Scottsdale at No. 8 and the New York City area at No. 10. One challenge for the lung association in tracking pollution levels is that fewer than 1,000 of the 3,068 counties in the U.S., not including Dutchess and Putnam, have monitors. 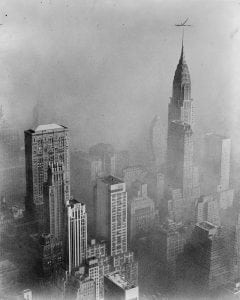 The Chrysler Building seen from the Empire State Building on Nov. 20, 1953, during a six-day smog that killed at least 200 people (Photo by Walter Albertin/ World-Telegram, via Library of Congress)

There has been some improvement in ozone levels since the passage in 1987 of a global treaty to reduce them. Dutchess County has 19.5 fewer high-ozone days than it did in 1996 and Putnam has 19.2 fewer. To receive updates on air quality by email, see enviroflash.info.