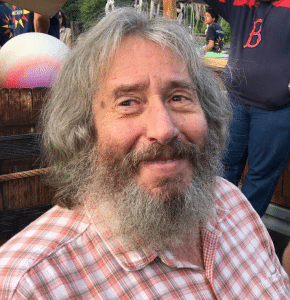 At age 7, while attending Camp Willoway, he met Pete Seeger, who inspired him to learn guitar. He studied theater at Northwestern University in Evanston, Illinois, where he co-founded the counterculture venue, Amazingrace Coffeehouse. After graduating in 1971, he moved to Eugene, Oregon, where he was involved with the Oregon Country Fair, the Arts Center and the People’s Food Co-op. In 1975 he received a grant to pioneer a program playing music for Alzheimer patients.

In 1977, he returned to New York, where in 1980 he became an educator for Clearwater, which Seeger had founded and where Dan worked for 30 years. In 1989 he was one of a group of American and Soviet crew members who took the Te Vega on a roundtrip sail to St. Petersburg to promote environmentalism and world peace.

Dan is best known as a musician for his song, “It Really Isn’t Garbage,” from his album, Dinner Alone is a Bore. He was instrumental in creating a program in the Beacon elementary schools to encourage children to sing, which led in 2010 to a Grammy Award as one of three producers of Seeger’s Tomorrow’s Children.

At the end of his life, Dan grew a beard, vowing not to cut it while Donald Trump was president.

His survivors include two sisters, Deborah Einbender and Paula Einbender, and two stepsiblings, Lauren Resnick and Don Brown, as well as four nieces and two nephews. A memorial service is being planned.