The Putnam County Office for Senior Resources has named Donna Anderson (below left) of Garrison as one of its two Seniors of the Year. She was presented with the award by County Executive MaryEllen Odell in a ceremony on May 23 at the Putnam County Golf Course. Mary Bodor of Patterson was the other recipient. 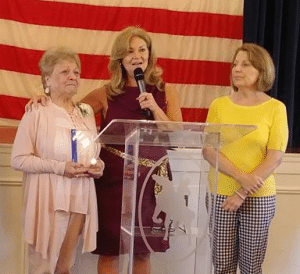 Anderson, 77, is a longtime volunteer in Philipstown, and has been particularly active pushing for the senior center that is expected to open this year in the Butterfield redevelopment. A Peekskill native, she moved to Garrison with her husband, Paul Anderson, in 1975. Married for 55 years, they have two children, Christine and Paul III (both of whom are nurses) and five grandsons.

When asked her advice about volunteering, Anderson said, “Don’t slow down — stay involved.”