Repairs to a broken culvert in a state-protected stream brought a stop-work order from Philipstown in a case involving a water-logged farm field, muddy language in a legal code, trout spawning, and other complexities.

The culvert is in Garrison on Twin Bridges Road, which crosses Annsville Creek, on the west side of Route 9 across the highway from Graymoor. After the 24-inch-diameter culvert pipe was crushed and clogged, the creek flooded an adjacent field. Robert Hilpert, who owns Twin Bridges Road and land around it, sent workers to clear the pipe, but they hit an obstacle.

Another team took over in May and began installing two smaller bypass pipes, Hilpert wrote in a memo to the Philipstown Conservation Board. 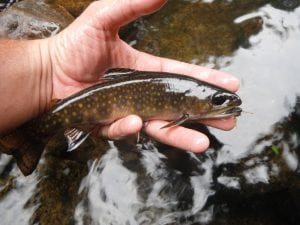 A brook trout caught in the Adirondacks (Photo by Ben Smith)

That activity prompted Philipstown authorities on June 11 to issue a stop-work order and notice of a violation, saying Hilpert needed a wetlands permit. Max Garfinkle, the town wetlands inspector, and Conservation Board members said that the bypass was at a higher elevation than the original pipe and could prevent brook trout — New York’s state fish — from swimming upstream to spawn.

Despite the stop-work order, the crew finished the project, Garfinkle reported to the Conservation Board, Philipstown Supervisor Richard Shea and the state Department of Environmental Conservation. The latter investigated and stated it would not issue a citation but would require Hilpert to repair the culvert, stream and road.

Hilpert maintained at the Conservation Board meeting on July 10 that he didn’t need a wetlands permit because the town code exempts emergency repairs. Nevertheless, he said he has applied for a permit and will commission an engineer to design a culvert repair.

In a letter to Garfinkle, attorney Luke Hilpert, who is Hilpert’s son, said heavy spring storms seemed to have further damaged the original pipe and allowed water to spill onto Twin Bridges Road, raising residents’ fears of a washout unless the culvert were repaired quickly.

Further, Robert Hilpert said July 10, “the pipe being clogged is flooding my field” and had been a problem for months. He added that the two-pipe remedy “was not intended to be a fix” permanently but to facilitate drainage. 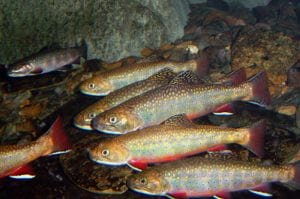 The board plans to revisit the situation in August. Meanwhile, it began pondering wording in the town code, which does not require a permit for “emergency work immediately necessary to protect health and safety or prevent damage to property,” if the town receives written notification within 48 hours.

Board members recommended it define words such as emergency more precisely.

“A field not draining is not an emergency,” member MJ Martin remarked.

Councilor Mike Leonard, the Town Board’s liaison to the Conservation Board, suggested that an emergency “would have to be something very significant,” such as someone’s home flooding inside.

“We’re not here to impede a solution,” said member Eric Lind. “A simple check-in with the town would probably have prevented a stop-work order” on the culvert project.

Martin agreed. “We want things to work for the residents,” she said. A preliminary consultation “would have saved everyone a lot of agita.”