“We’re trying to turn it into what it’s intended to be — a park preserve.”

The most obvious improvements are the combination park office and visitor center along with the newly paved Washburn Trail parking lot. Outdoor trail maps, information kiosks and signage have also been added. “The improved parking lot has made a big difference,” Thompson said. “It was a mud hole before.” 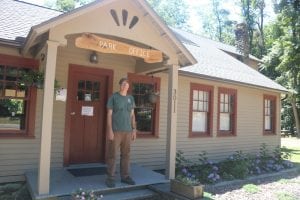 Evan Thompson is shown outside the new park office at Little Stony Point.(Photo by M. Turton)

Visitors, he said,  are now beginning to see the area as a formal park rather than “a place they can come and do whatever they want.” Little Stony Point had been plagued with littering, illegal fires and other problems in the past.

Thompson said the park’s image has also been improved by having staff man the gate on weekends. “We don’t allow coolers or music,” he said, also emphasizing that the park does not allow swimming due to hazardous currents and tides in the Hudson River. “It’s dangerous; people have drowned there.” No life guards are stationed at the park.

Those wanting a beach experience are directed to Fahnestock, where Canopus Lake offers a sandy beach, lifeguards, bathrooms and concession stand.

The office and visitor center, formerly a caretaker’s house, is open Wednesday through Sunday from 9:30 a.m. to 5 p.m. and features park maps, water, snacks and T-shirts. “And staff are very knowledgeable about local trails,” Thompson said.

Thompson has been focusing his efforts on Hudson Highlands because until last year the park had no dedicated funding or staff. “Now we have eight to 10 seasonal employees and a separate budget,” he said.

There is one substantial project still underway at Fahnestock, however. “The campground is closed this season because we’re redoing the entire water system,” Thompson said. “We haven’t had potable water in 10 years.” He hopes the campground, which is normally open from April through December, will be up and running by September.

The Little Stony Point Citizens Association is also increasing its profile. A volunteer center being constructed adjacent to the park office is expected to open in September. “The center will be used for environmental, education and artistic recreational programming that encourages people to connect more deeply with the park, and to develop a sense of stewardship in the process,” LSPCA President Fred Martin wrote in an email. 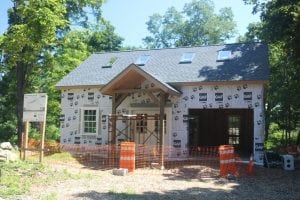 The Little Stony Point Volunteer Center is under construction. (Photo by M. Turton)

The volunteer group received a $50,000 grant through the New York State Park and Trail Partnership Program and New York’s Environmental Protection Fund. Another $31,000 was raised through donations by local philanthropists, small contributions and fundraising events. Martin said approximately $18,000 in building materials were donated along with $36,000 in professional services and labor.

A nod to climate change

The new Washburn Trail parking lot and recent parking improvements at Scenic Hudson’s Mount Beacon Park both reflect the influence of climate change. The Mount Beacon lot has a pervious gravel surface which reduces stormwater runoff. At Washburn, the spaces were paved with pervious asphalt.

“We used gravel for the parking area and stone dust for the walking paths because these permeable materials absorb water runoff and heat,” explained Rita Shaheen, Scenic Hudson’s director of parks. Thompson said that at Washburn traditional asphalt was used for the entrance and main aisle of the lot because the pervious form used for the parking spaces is less durable.