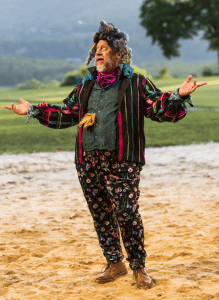 Wesley Mann in “The Heart of Robin Hood” (HVSF)

Wesley Mann has performed in 13 seasons of the Hudson Valley Shakespeare Festival at Boscobel in Garrison. This summer he portrays the Earl of Northumberland in Richard II and the manservant Pierre in The Heart of Robin Hood.

What are the challenges of performing under a tent?

The space demands more of you. You have to navigate the tent masts, which means it’s important to move, because some seats have an obstructed view, and you want to be seen. The space demands that you separate yourself from the other actors to maintain sightlines, and that you speak louder. Plus, we’re upstaged by the beauty. The first time I saw the view, I was gobsmacked. I always like to be here when members of the Conservatory Company first arrive because they can’t believe what they’re seeing.

Your Wikipedia entry says you have “a long-suffering, vaguely glib demeanor.” Would you agree?

Well, let’s look up glib [silently reads definition]. Hmmm. I don’t think I’m “insincere or thoughtless.” Every moment onstage is specific and well-rehearsed. I don’t know who writes these Wikipedia things. I like what one reviewer called me: “goofily wily” and “delightfully weird.” I was going to get a T-shirt made, with one on the front and one on the back.

What are your favorite Highlands haunts?

I grew up in northern California and live in Los Angeles, but I’ve always loved this community. Cathryn Fadde at Cathryn’s Tuscan Grill has been great to us and for us. My watering hole used to be Whistling Willie’s, with the old owner. I love Riverview, too. During the 10 years I was here consistently I’d see businesses open and would wonder if they’d be there the next summer.

Do you get recognized more in L.A. or Cold Spring?

In L.A., I get recognized because of my TV work. People usually say, “I know you, but I don’t know your name.” Here, they know my name — they call out to me — it just happened, in a music shop in Beacon. It’s sweet. I love talking to people about their HVSF history, what plays they’ve seen.

What are you doing in the fall?

It looks like I’ll be doing Rosencrantz and Guildenstern are Dead in Pasadena. I have never done Stoppard. It begins in early September, right when we end here, so I’ll be getting in my little convertible and zooming out of town.

One thought on “5 Questions: Wesley Mann”