Several years ago, Frank Bugg was on a crusade to align the staff and students of the Beacon City School District.

The Beacon resident was a fixture at school board meetings, repeatedly asking district officials to hire more minority teachers and staff to reflect the racial and cultural diversity of the student body. 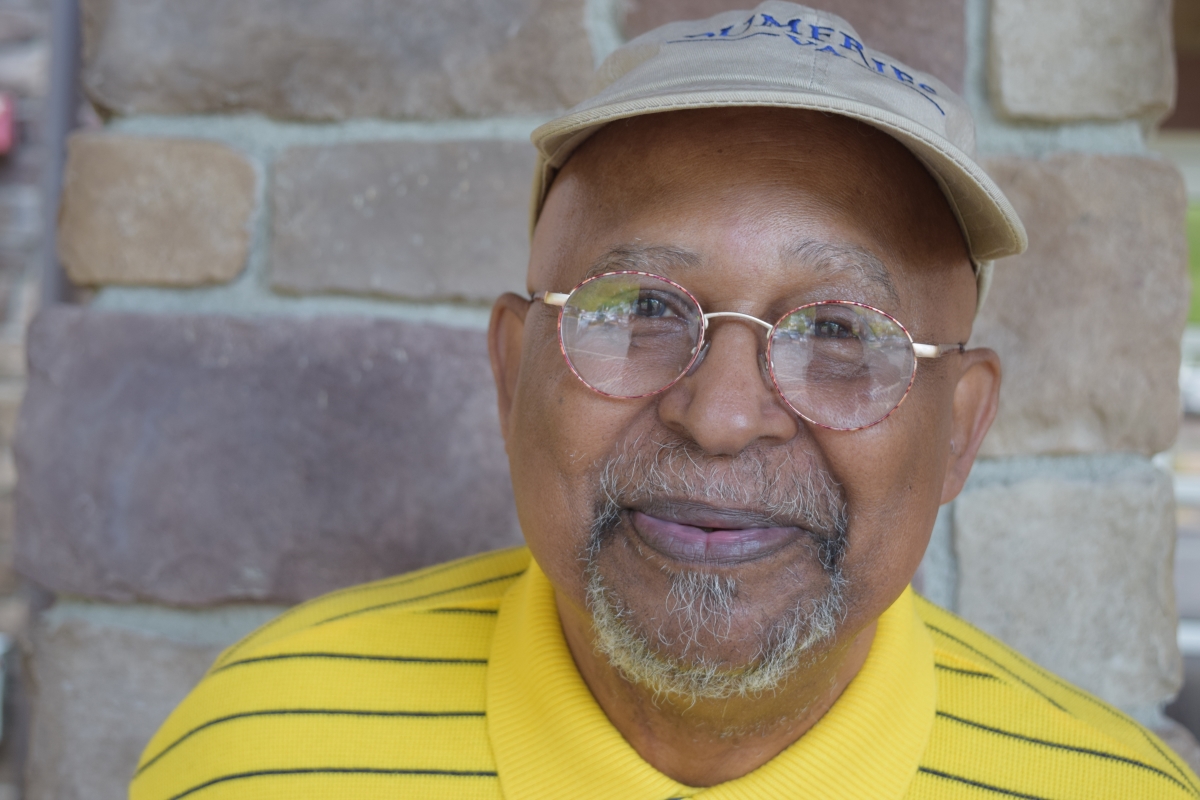 The hires are part of an effort implemented over the last two years to diversify by widening the district’s search for qualified candidates, said Superintendent Matt Landahl.

“We’ve talked as a district about the potential for a student to go through our system and never have a teacher of color, and that’s unacceptable,” said Landahl, who will begin his second school year in Beacon next month.

In 2015 and early 2016, when Bugg was a regular at Beacon school board meetings, the district did not release a breakdown of the races of its teachers and staff. But those statistics have been posted online since 2016-17, and those for last year show that while 54 percent of the district’s students are Hispanic, black, Asian or multiracial, 87 percent of the teachers and administrators are white.

“We have shifted our conversation internally to ‘We have to be student-centered,’ ” says Cecilia Dansereau-Rumley, the assistant superintendent for instructional services. “We have to think about who they are and what they need — at all levels, whether it’s teacher’s aides, instructors or assistants.”

Antony Tseng was one of three newcomers — along with Meredith Heuer and Michael Rutkoske — who spoke out about diversity before being elected to the school board in 2016. Today, Tseng chairs the board’s newly formed diversity committee, which, after a year of discussion, was charged with studying ways to increase instructional staff diversity.

“Putting staff demographics on the district website and drafting a uniform hiring plan have been good steps,” said Tseng, who would like to eventually see the diversity of the staff better reflect that of the student body.

“I’m optimistic, but we should always remain open to new ideas, both short-term and long-term,” he said, including possibly hosting a teacher’s job fair.

Dansereau-Rumley points to a few factors when discussing changes in district hiring practices.

A decade ago, job openings were only advertised in local newspapers and through the Dutchess County Board of Cooperative Educational Services (BOCES). After a districtwide hiring policy was drafted in 2010, school system officials began advertising on the Online Application System for Educators (OLAS), which reaches a larger audience. 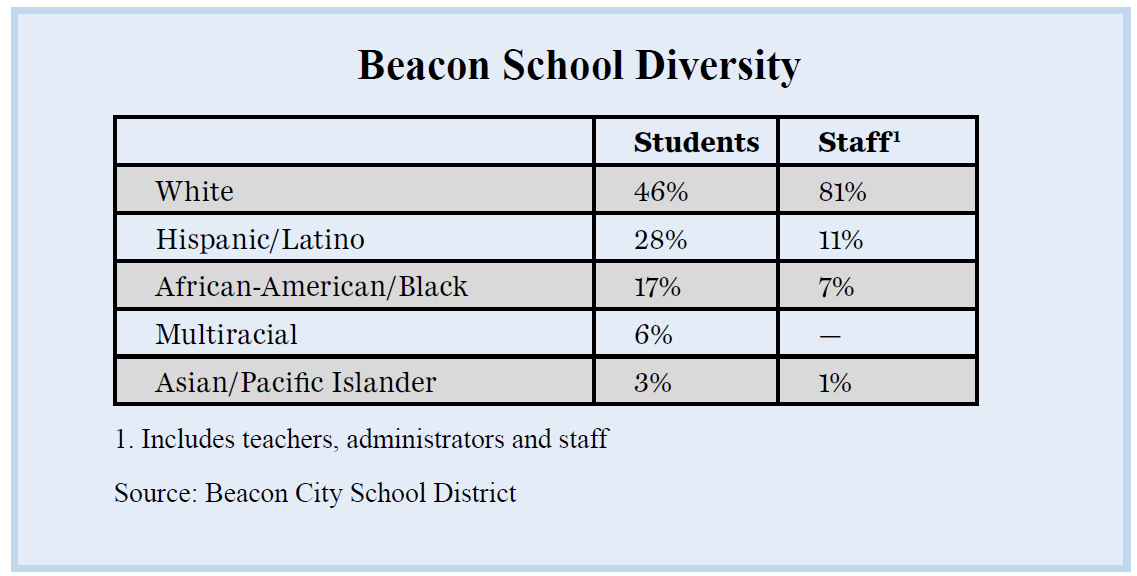 Dansereau-Rumley says OLAS uses a filtering system that scans resumes for grade-point averages and other qualifiers to eliminate candidates before their applications reach district officials. So Beacon decided to go old school.

“Now we’re looking at every single application by hand, no matter what, for every opening,” Landahl says.

This year, the district had four openings for elementary teachers, the position that usually brings in the most applications. Two years ago, Dansereau-Rumley says, “we would have had maybe 100 applicants,” after running resumes through OLAS.

Instead, this year district officials reviewed 560 resumes. (The four hires are all women, and three are white and one is black.)

In addition to expanding its searches to reach more minority candidates, the district says it looks for instructors with a diverse “mindset.” That could mean a teacher who has experience working in schools with diverse student populations and with experience in “culturally responsive practices” that address race, gender, language and other factors.

“We do want the most highly qualified teachers,” Dansereau-Rumley says, noting that the district has worked to identify the skills and experience needed to support its students. “It’s important for all of our students that we’re building toward a global society.” 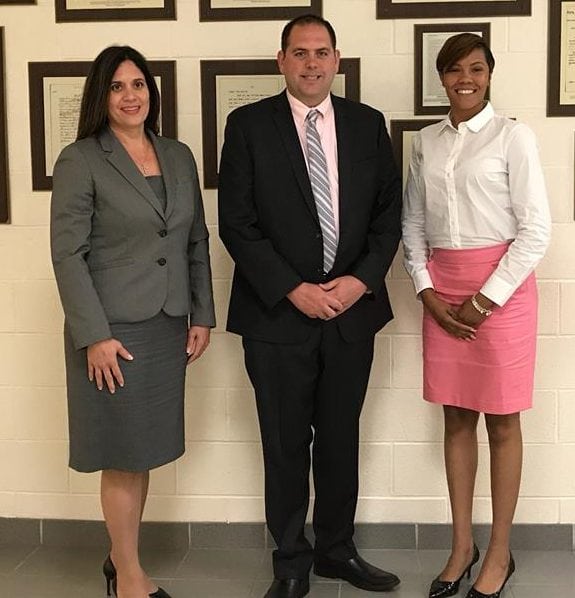 Landahl held a series of community meetings after he joined the district before the 2017-18 school year and says he heard from parents and residents that they did not feel they were involved enough in the hiring process. For the latest principal hires, parents were included on interview committees and given surveys to determine what they wanted to see in candidates.

For Bugg, unfortunately, the changes may be too little, too late. While he acknowledges the progress Landahl and others have made, he says he can’t commit any more energy to the cause.

More than anything, he says he’s grown dismayed by apathy among the minority parents he tried to galvanize. He recalled hearing from one parent whose son had trouble reading while filling out college applications.

“There is such a malaise in the minority community about this,” Bugg says. “If the parents of these kids are not interested…” he trailed off. “I was so disgusted with the whole thing.”

Terry Nelson, a member of the Beacon City Council who is black, said he’s had trouble getting minority community members to attend its meetings.

“It’s difficult to hold people accountable without knowing what everyone’s situation is,” such as work schedules, he says. “But it breaks my heart. I wish there was a way for other portions of our community to be heard.”

Landahl and Dansereau-Rumley say they know there is more work to be done. But, says Dansereau-Rumley, “the clearer we get about what we value and begin to demonstrate that,” the more easily the district can present to “candidates something that they want to be a part of.”