Throughout most of the year, a cook faces one primary dilemma per meal: What to make. But the recent heat waves brought with them an undertow of destabilizing culinary questions. In addition to what, I also found myself wondering when, where and how. And as for why, the very thought made me dizzy.

Suddenly, serving cold cereal for breakfast at 4 a.m., before the sun rose, and frozen peas straight from the bag for dinner on the porch after midnight seemed like sensible options. And the basement became a perfectly nice setting for lunch.

Anything to avoid the sun.

As the summer wore on, I reassured myself that we’d eaten enough kale in February to cover any nutritional deficits we might accrue by subsisting on Popsicles until the weather returned to its senses. 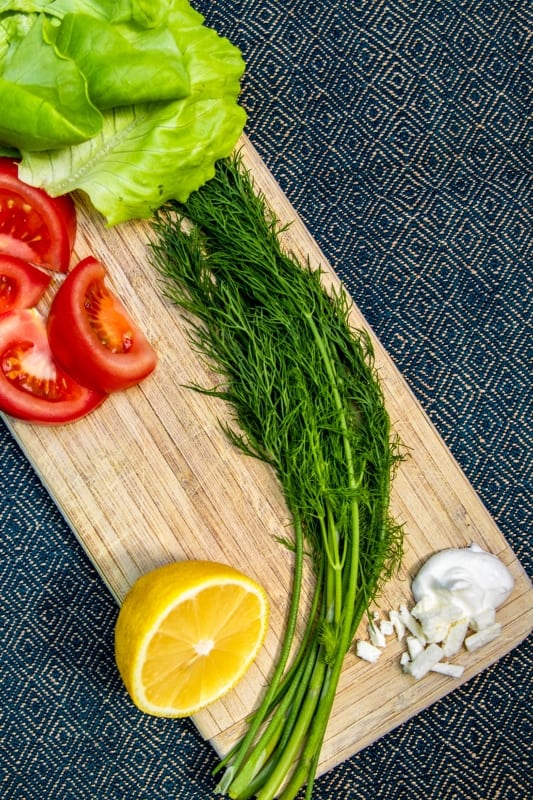 Ready for the dressing (Photo by Henry Weed)

But no matter how loopy or listless any heat wave makes me feel, there comes a moment when I am overtaken by the urge to gather everyone at the table for a meal. And for that, what I want is a perfect salad.

You might reasonably assume that a perfect salad depends on perfect components: wedges of flagrantly ripe local tomatoes, for example; a handful of blanched green beans; soft, buttery lettuce; fresh herbs; perhaps a scattering of paper-thin carrot coins or small wedges of cucumber. (The latter should be de-seeded both so they are less bitter and to avoid making the salad watery. Cut a cucumber in half lengthwise and drag a teaspoon along the channel holding the seeds.)

My current salad obsession also includes pieces of seared tenderloin, a craving that was ignited by a beef-tip salad I ate at The Red Rooster, one of a handful of restaurants at the Woodstock Inn in Vermont. (Though I suspect the air conditioning might have contributed to my enjoyment of that meal.)

I like to think that I have the wherewithal to sear a piece of beef and blanch the aforementioned beans first thing in the morning, so that I won’t need to turn on the stove once that godforsaken sun comes up.

But the truth is, it doesn’t matter. Because the key to salad bliss is the dressing. A bad dressing will disgrace the most righteous components and a good one will turn scraps of iceberg into a magnificent meal.

The other day, I was talking with a group of fellow cooks when one described a personal victory. He had created a salad dressing so good, he said, that his children (all 55 of them; he heads the kitchen at a summer camp) lapped it up like kittens at a bowl of cream, after they’d devoured the voluminous bowl of greens he’d tossed it with. The cook, Sam Arfer, has been cooking at the same camp every summer since 1991, so he speaks from vast experience. 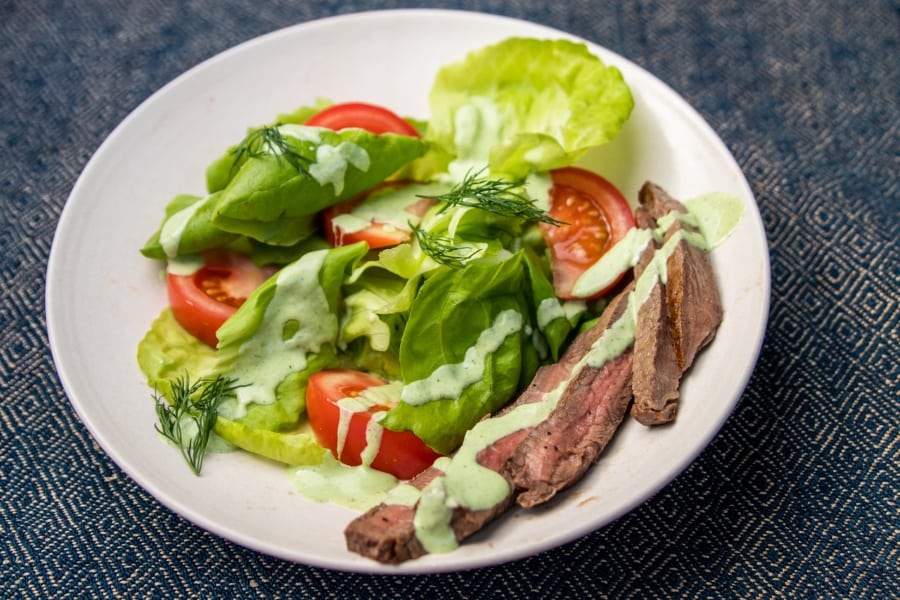 Sam-Inspired Dressing over salad with tenderloin (Photo by Henry Weed)

In 1864, author and gastronome Andrew Valentine Kirwan wrote, in Host and Guest: A Book About Dinners, Dinner-giving, Wines and Desserts, that the making of salad dressing requires a “patient and discreet man.” Sam qualifies.

I asked what was in his dressing. “Feta, sour cream, garlic, dill and mayonnaise,” he said. “Plus a little milk, to thin it.”

Oh yum, I thought. Creamy, fresh, slightly sour, a little salty: the very idea was a cool breeze to my sweltering brain. I vowed on the spot that I would make it right away … just as soon as the heat broke.

Combine all ingredients in a blender. Whisk until smooth. Taste, and adjust seasonings.