How a Catskills swimming spot could protect Breakneck

Five years ago, the Blue Hole swimming hole near Peekamoose Mountain in the Catskills was a beloved, locals-only destination at the end of a narrow herd path.

Then the travel journalists found it.

Suddenly this tiny, tranquil location was lauded in Men’s Journal and Travel + Leisure. It was featured on a Travel Channel show, “Top Secret Swimming Holes,” making it not a secret. Instagram didn’t help.

Visitors poured in by the thousands. The herd path became a trampled highway. Cars parked on the shoulders for miles along winding Peekamoose Road. Bags of trash were left behind on the trail, in the woods, and in the water, which feeds the Rondout Reservoir, a source of New York City drinking water.

Like Breakneck Ridge in the Highlands, Blue Hole was in danger of being loved to death.

An overabundance of outdoor tourists has long been an issue in the West, where hikers are accustomed to checking if certain trails, mountains or rock climbing areas require day permits. But that is nearly unheard of in New York State, and once pristine natural attractions are paying the price. 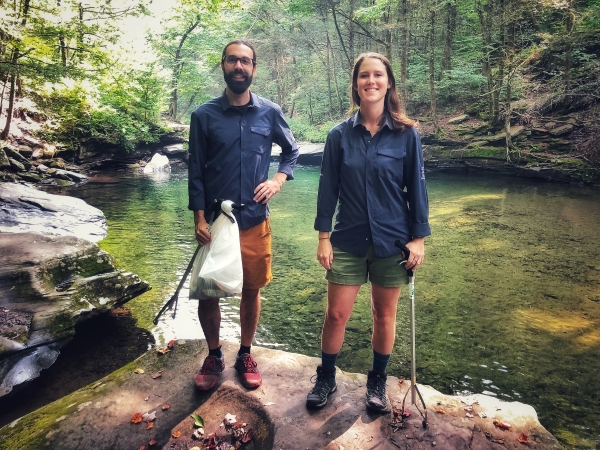 Andy Mossey and Selina Guendel of the Catskill Center, picking up microtrash at Blue Hole (Photo by B. Cronin)

“If we allow all these people to come and don’t provide any education or guidelines on how to use it responsibly, then we’re going to see it get trashed,” says Andy Mossey of the Catskill Center, who formerly worked for the nonprofit Leave No Trace Center for Outdoor Ethics, which had identified Blue Hole as being in critical danger of irreparable damage and traveled to the area last year to help the state develop new guidelines.

This summer, the state Department of Environmental Conservation put those guidelines in place in an attempt to save Blue Hole. A dumpster and two portable toilets were installed at the parking lot. Visitors are required to obtain a free permit online before visiting on summer weekends or holidays. Mossey and another steward, Selina Guendel, are on duty every weekend, holiday, and most weekdays.

When permits are required, the two approach visitors before they even get out of their cars so they don’t have time to unload and head down to Blue Hole only to be told they must leave. Other visitors are handed garbage bags. Each is shown photos of Blue Hole when it overflowed with trash and guests.

“Anyone who sees that, understands,” says Guendel.

For visitors who arrive on weekends and holidays without a permit, Mossey and Guendel provide directions to nearby swimming holes at Minnewaska State Park and the Mongaup Pond Campground. But the most important tool at their disposal is their infectious attitude. They say they are genuinely happy to see everyone.

“We’re not like, ‘Ugh, another person,’ ” says Mossey. “Instead we say, ‘Wow! You drove three or four hours to get here! Welcome to the Catskills! But we need you to help us take care of it.’ ”

With the summer winding down, it’s clear the policies are working. When I visited Mossey and Guendel early Monday morning they were cleaning up after a busy weekend. Instead of hauling out a dumpster’s worth of garbage, they had filled two kitchen-sized bags with “microtrash” such as juice-box straw wrappers that fell out of pockets.

The site was immaculate, and with just the three of us standing there, Blue Hole again resembled the untouched, tranquil paradise that made locals fall in love with it for hundreds — and possibly thousands — of years.

The same groups that came together to work out a plan for Blue Hole are talking about how its success can be replicated. The Leave No Trace Center has identified Breakneck Ridge as a priority and will travel to the Highlands in October for a week of workshops and discussions.

As we walked back from Blue Hole, Mossey noted how the path was already recovering, with less erosion. “You can expect to see, over the next year or two, some vegetation growing back, to help lock some of the soil in,” he explains.

4 thoughts on “Out There: Saving Blue Hole”