What happens if Maloney wins the AG primary?

Election Day is two months away, and the Democrat candidate for New York’s 18th Congressional District, which includes the Highlands, remains TBD.

The picture will become clearer after Thursday’s Democratic primary for state attorney general, a position that opened in May when Eric Schneiderman resigned in the wake of a sexual-abuse scandal near the end of his second, three-year term.

Among the four Democrats on the primary ballot is Sean Patrick Maloney, a Philipstown resident who is running simultaneously for his fourth, two-year term representing the 18th District in Congress.

The other three Democrats are Letitia “Tish” James, the New York City public advocate who has been endorsed by the Democratic Party and Gov. Andrew Cuomo; Leecia Eve, a former aide to Cuomo; and Zephyr Teachout, a Fordham law school professor and author of Corruption in America.

A Quinnipiac University poll conducted in July found 42 percent of a sample of 415 registered Democrats remained undecided, while James had 26 percent support, Maloney, 15; Teachout, 12; and Eve, 3. The poll had a margin of error of plus or minus 6.2 percent.

Maloney’s campaign has survived two court cases that challenged the legality of running for a state and federal position at the same time, provided he drops out of the congressional race if he wins the AG primary. He has said he will do so. Maloney previously ran for the Democratic nod for attorney general in 2006 only to finish third in a four-man primary won by Cuomo, who went on to win.

(As The Current was going to press, Teachout filed a lawsuit claiming that Maloney’s transfer of more than $1.4 million from his federal campaign fund to his state coffer violated campaign finance law. Maloney noted the transfer in his state campaign disclosure forms and has said in interviews that campaign laws allowed him to direct “almost all” of the $3 million raised for his congressional campaign to his AG run.)

The congressman did not respond to a request for comment on the AG race but told City & State last month that he was running because “I think what people are looking for is something different, and somebody who can get this job done at a critical time when you need somebody with public and private sector experience, particularly the experience of standing up to Donald Trump in Washington, who understands the federal issues. Who understands the Russia investigation. Who has real experience running investigations. That’s the skill set that is needed in this office at this moment.”

He also said: “I’m the only one in this race who’s actually beat Republicans. It’s one thing to win races when you run against other Democrats in New York City. I beat a Republican in three congressional races in a row, in some of the toughest campaigns in the country. I won in a Trump district as a gay guy with an interracial family. So we’re proud of that and we think it demonstrates an ability to win tough fights.” 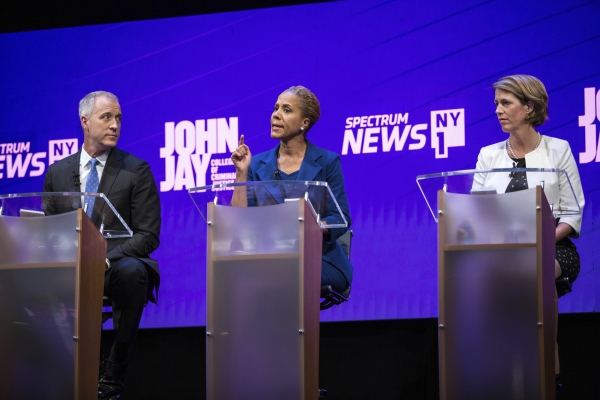 Sean Patrick Maloney, Leecia Eve and Zephyr Teachout at a debate on Aug. 28 among the Democratic candidates for attorney general (Photo by Holly Pickett/NYT via AP)

If Maloney wins the AG primary, a Vacancy Committee made up of the chairs of the Democratic parties in Dutchess, Orange, Putnam and Westchester counties would select a replacement for the congressional race.

James Borkowski, chair of the Putnam County Democrats, said he and his three colleagues have not met, “but there have been a lot of telephone conversations between us, Sean’s office and other people.”

Borkowski declined to say who the committee was considering if Maloney is the AG candidate. “I’m not at liberty to discuss who’s out there,” he said. “It would be rather presumptuous, and might not be fair to the people who are interested. But we do have several excellent candidates, if Sean wins. And I think he’s going to pull it off.”

Not every local Democrat has taken a rosy view of Maloney’s run for state office, grumbling that abandoning his congressional seat so late in the race could tip the election to his Republican challenger, Orange County legislator James O’Donnell.

The Democratic candidate-in-waiting would also be starting with zero campaign funds, which means that he or she would need to raise money quickly. Although Maloney won his 2016 campaign by a comfortable margin, President Donald Trump took the district by 2 percentage points.

Borkowski believes this is what makes Maloney a formidable candidate.

Borkowski noted that should Maloney win the AG primary, he has said he will work to keep his former seat blue. Maloney told City & State: “Nobody cares about keeping this district blue more than I do, I can assure you. It has been the focus of my life for six years. We turned it blue, we kept it blue and we’ve done such a good job at that, they couldn’t find anybody to run against me. So I’ve got the weakest [congressional] opponent I’ve ever had, and for that reason, we are in very good shape in this district one way or the other.”

The polls are open on Sept. 13 from 6 a.m. to 9 p.m. You must be a registered Democrat to vote in the primary.

That may not assuage Elisa Sumner, the chair of the Dutchess County Democrats and another member of the Vacancy Committee. She too did not respond to a request from The Current for comment but was quoted in The Intercept saying she found Maloney’s dual candidacy to be “an insult to the people in his congressional district. He’s basically saying to them, ‘If I can’t be attorney general, then I’ll still be your representative, but if I can, I’m leaving.’ ”

Along with the attorney general, Democrats on Sept. 13 will select candidates for governor and lieutenant governor. Actor and activist Cynthia Nixon is challenging incumbent Andrew Cuomo in the governor’s race, and Jumaane Williams, a New York City councilman, is taking on Lieutenant Governor Kathy Hochul.

3 thoughts on “Two Races, One Candidate”