Ask feds to do more to investigate risk

Sandy Galef, who represents Philipstown in the state Assembly, was among four state legislators who urged the Federal Energy Regulatory Commission (FERC) in a July letter and Sept. 7 news conference to address concerns about the proximity of the Algonquin Pipeline to the Indian Point nuclear plant. 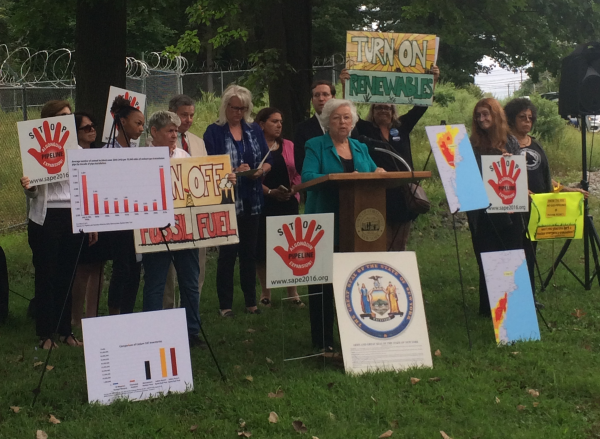 Assemblywoman Sandy Galef speaks during a press conference on Sept. 7 calling for the federal government to take a closer look at the safety of the Algonquin Pipeline that runs near Indian Point. (Photo provided)

The assembly members questioned an assertion by Entergy, which owns Indian Point, that the pipeline could be shut down in three minutes or less, arguing that FERC needed to demand more evidence. The officials also said that, because a federal assessment of the pipeline’s safety was conducted with the assumption it was operating under maximum pressure, no increased capacity or pressure should be allowed.

The 42-inch-wide Algonquin Pipeline carries gas past Indian Point and under the Hudson River. Indian Point is scheduled to close in 2021 but spent radioactive fuel will be stored on the site indefinitely.