Second Beacon gallery to close this year; will others follow?

The Matteawan Gallery, which opened five years ago on the east end of Beacon, will close Oct. 7. It follows the closure of a west end gallery, TheoGanz Studio, in April, after six years.

Both galleries featured local and regional artists in shows that typically opened each month on Second Saturday. Matteawan’s final exhibit is a collection of sculptures and drawings by Eleanor White (see below). By the count of owner Karlyn Benson, the gallery showed the work of 88 artists. The gallery was located in a smaller space farther east on Main before moving to its current location in 2015, which gave Benson more room to hang larger pieces. 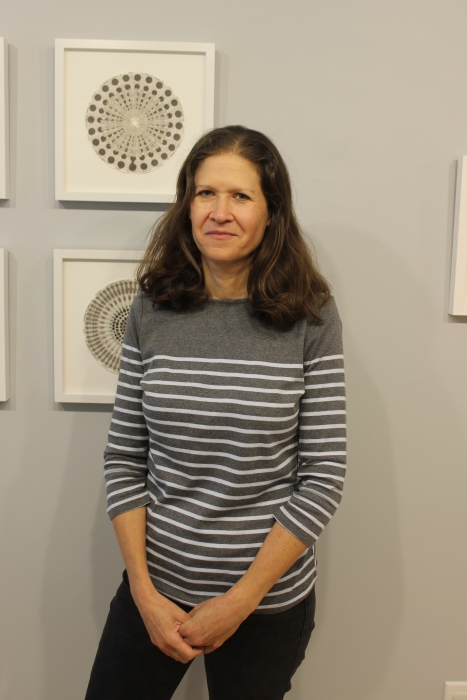 Karlyn Benson of Matteawan Gallery (Photo by A. Rooney)

Unlike many gallery owners in Beacon, Benson is not an artist, although she worked for many years at the Museum of Modern Art in its registrar office. She said she chose to close her gallery because, in addition to increased family caregiving needs, there just weren’t enough sales to justify the amount of work required.

“Having a gallery in Beacon requires deep pockets,” observes Rick Rogers, an artist who recently stepped down as president of BeaconArts. “You have your audience on Saturday and Sunday for perhaps six hours a day. If it’s a rainy day or there’s cold weather, your walk-ins are few. If you open during the week, you see a trickle. To depend on decent sales in that limited time frame is unrealistic.

“Beacon is a foodie and music destination with hikers sprinkled in,” he adds. “I open my studio on weekends and two of the most frequent questions I get are ‘Where is a good place to eat?’ and ‘Any good music in town tonight?’ Rarely does someone ask about the art scene.”

Benson, who has lived in Beacon since 2003, says she fears the day of small-town, bricks-and-mortar art spaces may be coming to an end.

“Maybe there is a new model, maybe not a storefront,” she says. “But I still love a place where you can see art in person; there’s no substitute. Galleries are someone’s vision, and offer a real perspective.

“I guess I’m more of a curator than a sales person,” she adds. “You can’t push an art sale too hard. And although artists support each other well here, there aren’t enough collectors, which still surprises me.”

Eleni Smolen, who owned TheoGanz, also said the time and money it took to keep her gallery open became a drain. She says she wanted to put more time into her own art, which had “gone by the wayside.” When she opened the gallery she believed she would be able to sustain both the business and her own art.

Benson notes that besides just keeping the doors open, there are months of planning for each exhibit, including visits to artists’ studios (“enjoyable, but time-consuming”), publicity, handling and hanging the art and all the other administrative duties that come with owning a small business. In addition, many owners of small galleries have other, full-time jobs.

“It’s a labor of love, but after a while, you have to make money,” she says.

Matteawan Gallery (Photo by A. Rooney)

Nevertheless, Benson says the decision has not been easy. She thought about giving it one more year (her lease renews in October) before family considerations cemented her decision. “A gallery in a small town is not run for the money, but for the community, and I value that,” she says. “It’s important to have a place where people can see art and have a dialogue. Every weekend I met new people, and I’ll miss that.”

Benson says serious collectors are buying most of their works these days at art fairs. “Big galleries are closing in the city, too,” she says. “The thing is, here, people come to see what’s on the walls, not to shop, although, of course, I wouldn’t have been around for five years if I hadn’t made sales. My best year was 2016, but it’s been flat since. I mostly make small sales in the lower price range, and you need to make a lot of small sales to pay your rent.

“One thing that has surprised me is that with all the development in the area I haven’t seen an increase in sales,” she says. “It seems that the people moving to Beacon in recent years are not interested in purchasing art from local galleries.”

Smolen adds that “there are numerous venues for artists to show their work here in the Hudson Valley and artists have become adept and proactive at promoting and marketing themselves. What we need is more publicity that reaches the greater New York City audience. The concept of the classic white-cube gallery may well be transitioning into new paradigms of art marketing. The bottom line is many galleries cannot afford to operate as museums.”

Barbara Galazzo, who ran Gallery 66 NY in Cold Spring, said much the same thing when she closed her space last year: Despite a steady stream of tourists coming through her door, it didn’t translate into enough sales.

Benson says she will continue to sell art through artspace.com and work with artists through a new venture, Karlyn Benson Creative Consulting. She says she also would like to organize pop-up exhibits, which Smolen has been doing. Her next exhibit, Mountain and Rivers Without End / Paintings from a Trail, with works by Hiro Ichikawa, opens Oct. 6 at the River Center at Long Dock Park in Beacon and runs for three weekends. 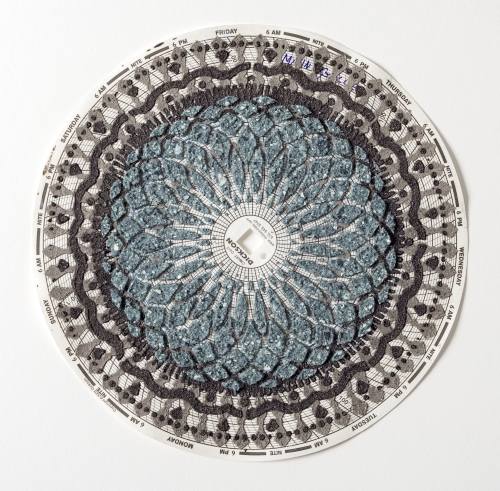 Matteawan Gallery’s final exhibit, It’s About Time, a collection of sculptures and drawings by Eleanor White, runs through Oct. 8. The work of the Beacon-based artist usually involves covering, revealing, overlapping, building up a structure, or isolating a single, found element.

The show includes a series of drawings, Graph Mandela, on discarded hygrothermograph charts, round sheets of paper from an instrument that measures and records humidity and temperature in the museum where White works. She covers the charts with intricate patterns that resemble mandalas. The “paint” she uses is composed of crushed eggshells or wood ash mixed with clear acrylic.

Her sculpture, “Continuous Timer,” is made from glass sand timers attached to a rotating wheel so they empty and refill.

One thought on “Last Show at Matteawan”