Editor’s note: Get Lit Beacon, a monthly gathering of writers at the Oak Vino Wine Bar, in September held a writing contest for pieces of fiction or non-fiction of 1,000 words or less about Beacon or the Hudson Valley.

Local writers and editors selected as the winner a story by Deb Higgins, a nurse from Wappingers Falls. Besides having her work published in the print version of The Current and posted here, Higgins received a gift card from Split Rock Books in Cold Spring. The second-place winner, Jennifer Rossa, a journalist in Beacon, received a gift card from Binnacle Books for her entry, “I Am the Symphony of Beacon,” which is posted at getlitbeacon.com.

The next Get Lit Beacon gathering takes place at 5 p.m. on Sunday, Nov. 11.

The mist blew up from the river enveloping everything in a shroud, broken only by a periodic light shower. And this was only right, for it was a sad day for the Lewis Tompkins Hose Company No. 1. They had lost one of their own. For 15 years Ben had turned out for every fire, protecting the city before it even was a city.

A Percheron 16 hands high, Ben was a 3-year-old when he joined Tompkins. While the other fire companies had to send someone running to the livery stable to fetch a horse, Ben was stabled at the hose house at Main and Cross; and when the bell rang and the traces dropped, he was prancing to go. In the early days, not all the Landing’s roads were paved. It mattered little to Ben; he hauled the hose wagon at top speed through mud, ruts, ice and deep snow.

And then there were the parades. Beacon was a parade town and Tompkins would travel from Peekskill to Glens Falls for firemen’s parades. The company could field a contingent of 150 marching firefighters and often took the prize for the largest company, although the mayor suspected that more members turned out for parades than ever showed up at fires.

They were led by the gleaming hand-drawn Gleason & Bailey parade carriage, donated by Mr. Lewis Tompkins himself; followed by Ben and Marty Grady in the hose wagon. Marty was the driver and therefore primary handler for Ben’s entire career. At the reviewing stand, a touch of the reins and Ben would rear up powerfully on his hind legs in salute. When people dropped by afterward, Ben had a habit of nipping Marty’s cap off in the presence of the ladies. 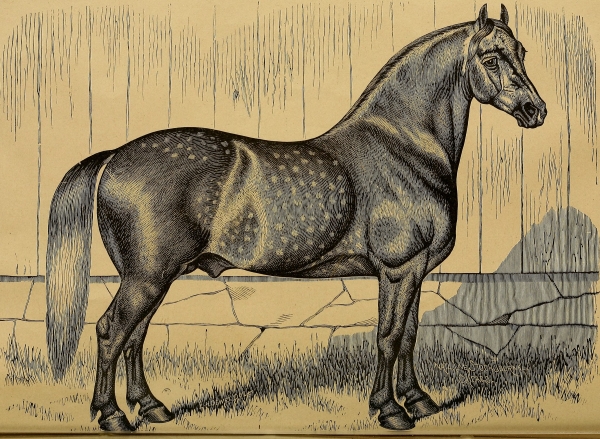 Eventually, the fire company acquired a new, shiny red Ahrens-Fox fire engine and Ben was retired. It wouldn’t do to send him to the Department of Public Works as he would surely tear off to a fire if he heard the bell; and the people wouldn’t hear of him being sold to a local carter, so Ben was sent to spend his days at John Gantvoort’s farm in Glenham, although he continued to make occasional appearances at parades.

Ben belonged as much to the city as the fire company. Clearly, his passing could not go unmarked, so the firemen decided to hold a wake. But how do you go about waking a horse?

The firetruck was relocated outside and the house hung with black bunting. Ben’s former stall was swept clean and hung with photographs of him racing to a fire.

When word spread, Mase Hook and Ladder sent an appropriately funereal floral arrangement. There were Dundee cakes from Huelsmans’ Bakery, and platters of food from Mr. Townsend at Cummings Grocery, courtesy of Beacon Engine.

“Is it true Ben was born in a circus?” asked young O’Brien.

“That’s as I heard it,” said Ed Strong. “Percherons start out dapple gray and turn white as they get older. He was bought by the New York Fire Department, but his color didn’t match the other horses in the team, so we got him.”

“He was always gentle with kids who stopped by after school. Not a skittish bone in his body,” said Kearney. “Smoke and noise and flying embers didn’t faze him in the least. Do you mark how canny he took a corner coming down a hill?”

“Marty had a hand in that,” said Strong. “He’d say the fastest way isn’t the fastest if you wind up in a wreck.”

“Most fire horses serve but five to eight years, and here was Ben still going strong after 15,” someone observed.

“Marty had a hand in that as well. No one ever took better care of a horse,” a statement greeted with heartfelt agreement.

“He and some lads are down in Glenham helping prepare the spot.”

Father O’Reilly, the curate at St. John’s. stopped by, unofficially of course, and made some brief, suitable remarks that God made the beasts of the earth and saw that it was good. The consensus being that these were fine sentiments, the good father was prevailed upon to take a pint from the keg donated by the neighbors from the candy company next door. Visitors stopped by to pay their respects and the reminiscing continued ‘til well into the evening.

Early the next day, those that could, went over to Gantvoort’s farm, although not in the fire engine that replaced Ben as that would have seemed disrespectful. There they saw Ben, wrapped in blankets, carefully laid to rest on a hill above the pasture. Gantvoort, who owned the National Oven Co. down on the Long Dock, expressed his intention to have a fence installed around the grave and a fitting stone erected. Satisfied that they had done right by Ben, they returned to the firehouse.

One thought on “Get Lit Announces Winner”