Born in Cold Spring on Sept. 26, 1924, he was the son of Joseph and Rachel (Constantino) Percacciolo.  He married Elaine Sylvester, and they were married 69 years before her death. They raised their four children in a home Angelo built on Church Street.

Angelo graduated from the Our Lady of Loretto school in 1938 and from Haldane High School in 1942, after which he enlisted in the U.S. Army Air Corps to fight in World War II. He served as a radio operator and top turret gunner on a B-24 Liberator stationed in Seething, England, during the European Theater of Operations. He flew 35 combat missions as a member of the Mighty 8th Air Force, 448th Bomber Group, 712th Bomber Squadron. 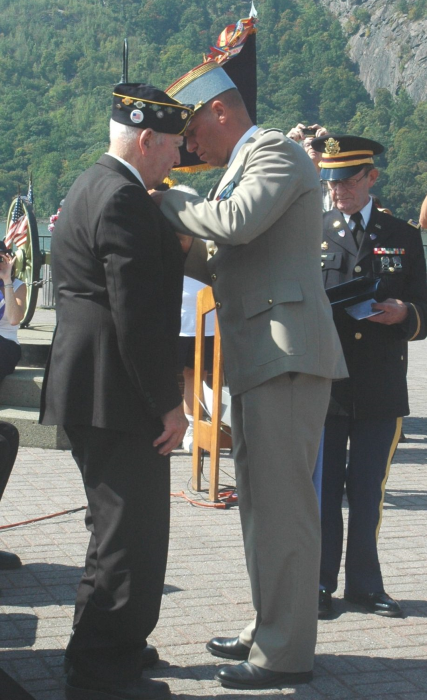 He and his fellow crew of 10, named The Pied Piper, were cited numerous times for valor and meritorious service. He was awarded the Air Medal with 5 Oak Leaf Clusters, three Battle Stars for campaigns in Normandy, Southern France and the Rhineland. He received the World War II Victory Medal and the Good Conduct Medal. In 2010, he was presented with the Jubilee of Liberty Medal at the Cold Spring waterfront by Col. Francois X. Yves, representing the French government.

Upon his discharge in October 1945, he went into the construction business with his father and brother known as Joseph Percacciolo and Sons. He was a member of Local 137 I.U.O.E. as a heavy equipment operator.

Angelo worshiped at Our Lady of Loretto and was a lifelong member of the Cold Spring Fire Company and an honorary member of the North Highlands Fire Company, as well as VFW Post 2362 and the American Legion Post 275, where he was president adjutant. He helped to build both the VFW and the American Legion Halls after the war. He also organized the Cold Spring Drum and Bugle Corps, which played in patriotic parades, and he was a member of the Dutchess Drum and Bugle Corps in Beacon for many years.

Known as “Perk” to his friends, Angelo played in many local orchestras and formed the CNP with his friend Carmel Carufe. The band played at many dances and clubs, including the Mount Beacon Casino and the Bear Mountain Inn. He loved the big bands and would go to their performances at the Paramount and Capital theaters in New York whenever they appeared there.

Angelo, who was known to friends and family as a kind and generous person, enjoyed traveling with his wife and betting on the horse races. He was especially proud of his children and grandchildren and loved spending time with them. He was an avid Yankee and Giants fan.

Friends may call on Thursday Dec. 13, from 5 to 8 p.m. at Clinton Funeral Home, 21 Parrott St., in Cold Spring. A Mass of Christian Burial will be held on Friday Dec. 14, at 11 a.m. at Our Lady of Loretto, with interment to follow with military honors at Cold Spring Cemetery.