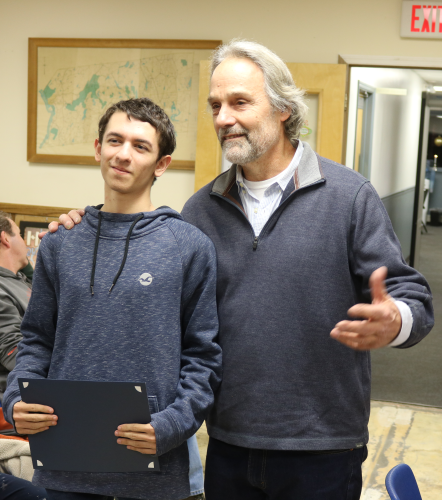 At the Dec. 11 meeting of the Cold Spring Village Board, Mayor Dave Merandy presented Nico Dellavalle, a cadet with the Putnam County Sheriff’s Department, with a certificate of appreciation for his work as a parking enforcement officer last summer. “You did a great job,” he said, noting the village had not received a single complaint about his work. Merandy also gave Dellavalle a letter of reference, adding he would be happy to welcome him back next summer.

A Market Street resident asked on Dec. 11 to be compensated for the loss of valuables caused by basement flooding last summer. The village has been advised by its insurance company that it is under no obligation to do so. The house is located within a flood zone.

The board’s annual reorganization meeting on Dec. 4 included more than 30 routine reappointments to various village positions, boards and committees. The only item postponed for the new year was the 2019 fee schedule, which covers everything from building department fees and park rentals to fines, permits and docking charges. Trustees will review the schedule early in the New Year. Some fees may be removed from the village code, a change that would require a public hearing.

The Village received a clean bill of financial health in an audit conducted for the year ending May 31, 2018. In his presentation at the Dec. 4 meeting, John Costilow, a director with the EFPR Group of Certified Public Accountants, said no significant issues were found. Costilow described Village management’s level of cooperation as “excellent.”

Officer-in-Charge Larry Burke reported that in November, the Cold Spring Police Department responded to 67 calls. Officers issued 26 traffic tickets, including 14 for speeding, as well as 49 parking tickets. No arrests were made. Burke said a spate of vehicle break-ins that occurred in the village in the fall is still under investigation; he urged residents to lock their vehicles and homes. Burke also advised residents to notify CSPD if they will be away for an extended period so that officers can check their residences while on patrol. A “dark house” form is available at Village Hall.

A public hearing will be held on Dec. 18 at 7 p.m. at Village Hall to consider proposed changes to the Recreation Commission, including reducing its membership from seven to five members.

A public hearing will be held at 7 p.m. on Jan. 8 at Village Hall to consider amendments to the Village Code,  including Chapter 64, regarding the historic district; Chapter 11, regarding approval of minor subdivisions; and Chapter 134, regarding zoning procedures.

Greg Phillips, the superintendent of water and wastewater, reported that village reservoirs are at 100 percent capacity. He also said he has reached out to the New York City Department of Environmental Protection regarding a letter sent by Merandy in September addressing the longstanding delays in DEP approval for the village tapping into the Catskill Aqueduct during repairs to the village reservoir dams.