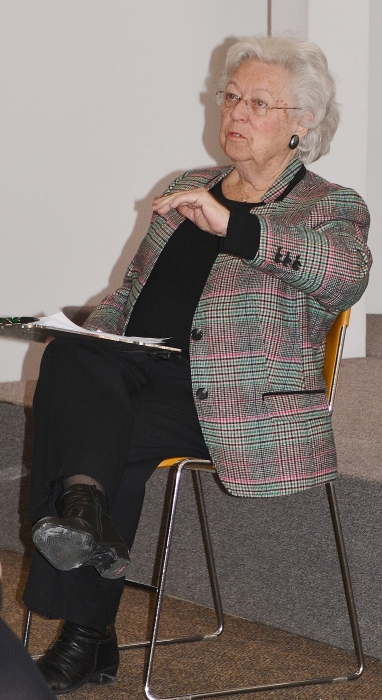 Sandy Galef at the Feb. 2 forum (Photo by L.S. Armstrong)

When Sandy Galef, who represents Philipstown in the state Assembly, hosted a forum on Saturday (Feb. 2) at the Desmond-Fish Library in Garrison, those issues drew the attention of constituents, as well, including Putnam County Sheriff Robert Langley, Putnam County Legislator Nancy Montgomery and Philipstown Town Board Member Michael Leonard.

Cuomo outlined his agenda in his State of the State Address and draft budget. The $102 billion he wants to spend in 2019-20, if the Legislature agrees, is 2 percent more than last year.

Six months after a state taskforce concluded that legalizing the recreational use of marijuana (medical use is already legal) would lead to more good than harm, the governor asked the Legislature to drop the ban on marijuana use by adults ages 21 and older and establish state supervision of marijuana production, testing, labeling, distribution, licensing and sales.

If taxed, legal pot could raise some $300 million for the state annually, according to the governor. Cuomo’s initiative allow large cities and counties to “opt out” if they don’t want to legalize pot and would automatically seal criminal records of past marijuana-related offenses.

Ten states and Washington, D.C., have legalized recreational marijuana, and polls of New York residents find a majority favor it. Legislators in Connecticut and New Jersey also are considering legalization.

At the Feb. 2 forum, Galef observed that “all I seem to be talking about is marijuana” these days. It didn’t take much prompting to get audience members to share their views.

Advocates said that legalizing marijuana could ensure product safety, provide revenue for the state, and assist growers who find banks leery of marijuana-related clients, even those producing medical marijuana.

Others expressed concern about the effect on the homeless and mentally ill and on public safety.

“If we’re going to treat marijuana like alcohol, have we developed the [related] law, like we have with alcohol?” Montgomery wondered. She noted that in Washington state, after marijuana legalization, “the incidence of aggressive crime increased by 17 percent. What is the State of New York doing to address that?” 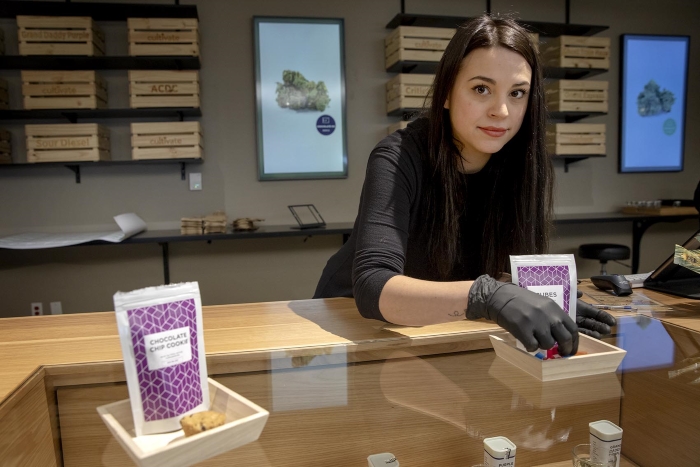 A manager at Cultivate, a dispensary in Leicester, Massachusetts, that began selling marijuana in November after the state legalized its sale to anyone age 21 and older (Photo by Robin Lubbock/WBUR)

The figure is the rate of increase in aggravated assaults reported in Washington from 2013 to 2017. In a new book, Tell Your Children: The Truth About Marijuana, Mental Illness and Violence, Alex Berenson, who lives in Philipstown, argues the increase can be attributed to marijuana use.

Langley predicted that if marijuana becomes legal, “you’re going to see an increase in fatal automobile accidents.” He cited statistics from Colorado, which legalized the sale of recreational marijuana in 2012 and from 2013 to 2016 saw a 145 percent increase in drivers involved in fatal traffic accidents who tested positive for marijuana.

That statistic comes from a Denver Post analysis of federal data that found the number of drivers involved in fatal crashes who tested positive for marijuana grew from 47 in 2013 to 115 in 2016. The newspaper noted that, unlike alcohol, the presence of marijuana in a driver’s blood doesn’t mean he or she was impaired, since pot can show up weeks later in toxicology reports.

When Galef asked Langley if officers can measure the presence of marijuana in drivers (as they do with alcohol), the sheriff replied that “there is a way,” but it requires rigorous, state-funded training.

He added that legalization would force the retirement of dogs that are trained to locate marijuana during searches, including two owned by his department. The state Legislature can fund alternatives for the New York State Police, he said, but will legislators “provide funding to all the other law enforcement agencies that are going to lose these valuable canines because of this law going through?” 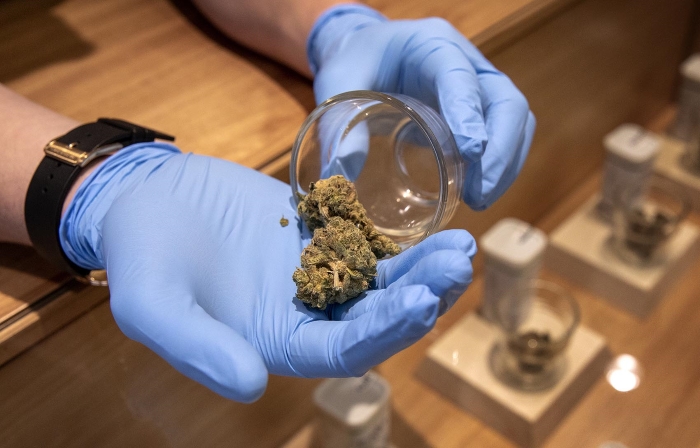 Marijuana buds for sale at Culitivate, a dispensary in Leicester, Massachusetts. (Photos by Robin Lubbock/WBUR)

He explained that because K-9s are trained to respond to the scents of multiple drugs, and officers cannot tell which scent alerted the dog, a judge could potentially rule that officers had no probable cause for a search that turns up legal pot but also illegal narcotics such as fentanyl. “That arrest is out the window,” he said. “We got that fentanyl off the street, but the bad guy gets to go loose.”

Cuomo’s proposal states that with legalization, state agencies would implement a driving-while-impaired campaign, fund research on roadside testing for impairment, and provide training for law enforcement to identify drivers impaired by drugs.

Cuomo “is really, really pushing” for legalization, Galef said. “This is the time, if you have any feelings, to say ‘no’ ” by contacting legislators and the governor.

Every few years, the state Legislature must re-approve the 2 percent cap on annual property tax increases by municipalities, school and fire districts and other entities. Cuomo proposed that the Legislature make the cap permanent, estimating that over six years it has saved the average property owner $3,200.

But Leonard said the cap hurts small towns. Larger municipalities can usually find something to trim, he said. But in smaller jurisdictions, when the costs of state-mandated programs increase by 4 to 6 percent, “it is very difficult” to cut.

“It’s not a fair playing field,” he said. Leonard advocated exempting towns from the 2 percent limit.

In response to a question, Galef said using state income taxes to fund such programs as public education, and thus reduce reliance on property taxes, “is worthy of consideration” but not being discussed in Albany. She noted that the change would probably mean less control for certain school districts, and, under the likely formula, give them less money from income taxes than they now collect in property taxes.

The proposal includes $2.5 billion, disbursed over five years, for safe drinking water and wastewater management, adding to $2.5 billion authorized in 2017.

Also under his budget, the Department of Environmental Conservation would receive $1.4 billion, a 7 percent increase, while funding for the Office of Parks, Recreation and Historic Preservation would be $391 million, up 6 percent. The allocation for the Hudson Valley Greenway program would more than double to $45 million.

Attendees at Galef’s forum supported such endeavors but also suggested tax incentives for homeowners going green, since solar systems, energy-efficient windows and other upgrades often are expensive and, in some cases, need parts replaced regularly or are only built to last about 15 years.

Galef promised to do what she can to help.

Cuomo also said he wants to ban single-use plastic bags. Dutchess County legislators voted on Dec. 6 to ban them there beginning in 2020.

“If there isn’t a law, people don’t change as fast,” Galef commented. “If there’s a law, they will do it.”