Advance to Section 1 quarterfinals with 75-70 win

Day’ion Thompson scored 33 points for the Bulldogs and Aaron Davis added 14. “Great first half and had to come together late in the game to pull this one out,” Coach Scott Timpano wrote on Twitter.

Beacon (15-7) is scheduled to visit No. 3 Horace Greeley High School (Chappaqua) on Saturday at 2 p.m. in the quarterfinals. Greeley (19-2) defeated No. 14 Peekskill on Thursday, 87-60. Chris Sauerborn had 26 points, Nick Townsend scored 22 and Chris Melis added 19 for Greeley. 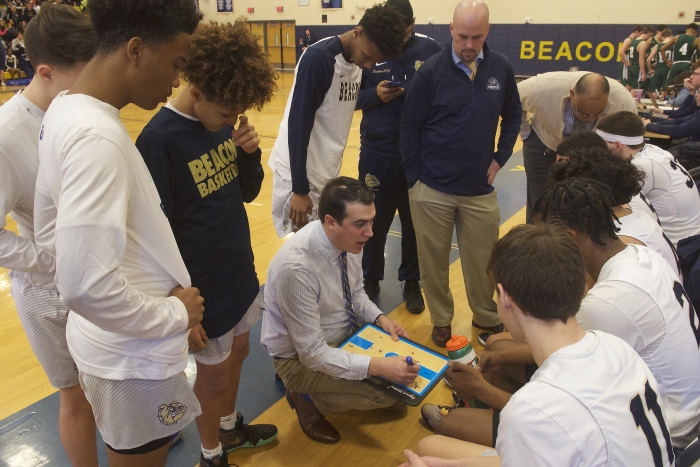 Coach Scott Timpano talks with his players during a timeout in Beacon’s playoff win over Yorktown. (Photo by S. Pearlman)

Against Yorktown on Feb. 16, the Bulldogs took control of Saturday’s game from the start and led 33-17 at halftime. 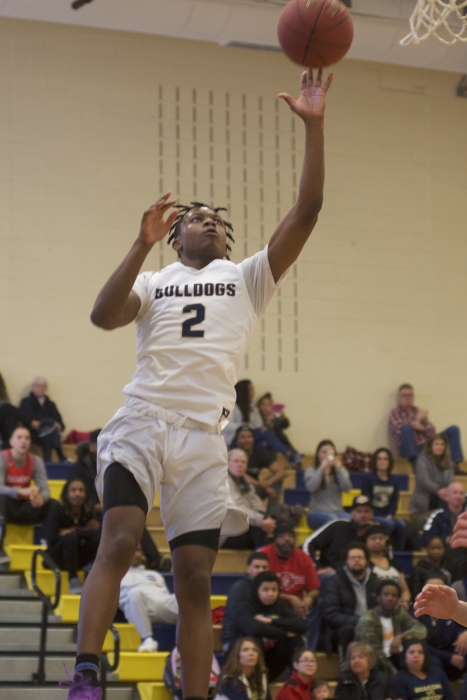 “We played one of our better games of the season,” Timpano said. “We controlled the tempo, and our defense was excellent. They weren’t able to get the ball down low, and we got in the passing lanes.”

“Kai played an excellent game, he was super-aggressive on their big man and limited his touches,” Timpano said. “And he was a monster on the boards. Manny also had a great game, he guarded a big, and came up big for us.”

Timpano and the Bulldogs know they’ll need a complete game to upset Somers (16-4).

“Somers plays a lot of zone defense,” Timpano said. “They press and try to force turnovers. We have to take care of the ball and get good movement. We have to stay under control.”