City prepares for influx of wireless

The Beacon City Council has amended the second of its two communications laws as it prepares for the potential influx of small-cell and other wireless facilities. But the wireless company that appears to have Beacon on its radar won’t divulge its plans for the city.

The council last year passed regulations for small-cell facilities, the low-powered radio antennas expected to power the forthcoming 5G network. On Tuesday (Feb. 19), the council revised an older law, first adopted in 2002 to regulate radio towers and other technologies, to more closely align with the more recent small-cell law. 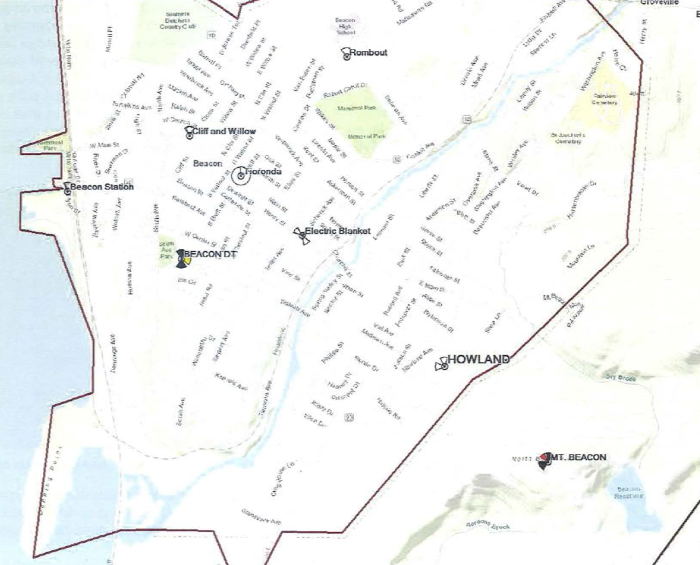 There are three wireless applications pending in Beacon, all submitted by Verizon. The first two, both for small-cell units on Beacon’s west side, will be reviewed by the Planning Board. The third, an application to install a 52-foot wooden utility pole on private property on Howland Avenue, will be considered by the council.

Wireless providers must obtain a special-use permit from the council to install small-cell units on poles that are higher than 50 feet, within 20 feet of a home or have equipment less than 8 feet from the ground.

Tuesday’s ruling means that all other (non-small-cell) wireless facilities now require a special-use permit, as well. Both laws include a priority list of locations where wireless equipment can be placed, with private property and residential and historic districts identified as the least desirable. Whenever possible, wireless facilities should be attached to buildings or structures or use “stealth” designs, the city said.

A map submitted by Verizon as part of its Howland Avenue application shows three sites “at various stages of development” in addition to the locations already being reviewed. The map is blurry and includes almost no additional information, but the new sites appear to be near Rombout Middle School, South Avenue Park and the intersection of Main Street and North Brett. A Verizon representative would not comment on the plans.