It was called the Fixing American Surface Transportation Act, or FAST. Signed into law in 2015, it was meant to prevent accidents involving the lengthy oil trains that travel past the Highlands along the west shore of the Hudson River.

The name of the act is proving ironic, as one of its central safety provisions — requiring the trains to be installed with electronically controlled pneumatic brakes so they can slow down in time to prevent derailments — has been rescinded by the Trump administration.

Nicknamed “bomb trains” by environmental activists and known to the industry as High Hazard Flammable Unit Trains, the trains have drawn scrutiny for their propensity to derail and explode. Many carry highly combustible fuel, are difficult to slow down because of their length, and have cars whose walls are thin and more likely to puncture.

The decision has been celebrated by railroad companies who lobbied against being forced to add the brakes, citing their cost. 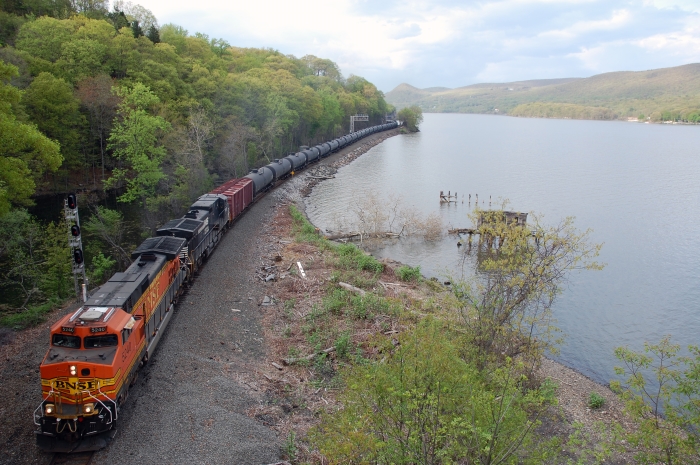 A locomotive pulling oil cars travels along the west side of the Hudson. (Photo by Matt Kierstead)

The rule change comes as Scenic Hudson released its first Hudson River Oil Spill Risk Assessment, a seven-party study that examines the impacts of an oil spill on the river and the ways it could be cleaned up.

“Actions that will enhance spill prevention and response on the Hudson are more important than ever now that the U.S. Department of Transportation has repealed safety regulations that would have lowered the risk of spills,” said Hayley Carlock, the director of environmental advocacy for Scenic Hudson.

Jon Bowermaster, who made a short film, Bomb Trains on the Hudson, as part of his larger Hudson River at Risk project, said he was not surprised to learn that the safety regulations had been scrapped. His film drew attention to the trains when it was posted in 2015 on the website of The New York Times.

“The film is still, I hate to say, ‘popular,’ but despite the notoriety of the trains, people still don’t know quite what they are carrying and where they’re going,” he says. “The train traffic has slowed a little bit as oil prices have leveled off, but they continue. I see them rolling through Kingston every day.”

The Department of Transportation said the rule change is necessary because adding new brakes would cost more over 20 years (between $376 million and $491 million) than the value of their benefits (between $131 million and $198 million).

The calculations in the agency’s Regulatory Impact Analysis are based on, among other criteria, the assumption that the amount of oil transported by rail will decrease, and that the FAST Act’s other provisions, including requiring that oil-train cars are more structurally sound and reduce speed in heavily populated areas, are more cost-effective. The analysis also notes that between 2006 and 2016 there was only one fatality in the U.S. as a result of a crude oil or ethanol derailment.

Oil Spill on the Hudson

One of the 77 scenarios prepared by Scenic Hudson assumes that the contents of 16 or 17 derailed oil-train cars, or enough oil to fill 11,000 barrels, spilled into the Hudson near the Newburgh waterfront. A spill of that magnitude has occurred three times in the U.S. in the past 15 years, the organization says.

After the spill, about 40 percent to 50 percent of the oil would evaporate, and most of the remainder would flow into the river, according to Scenic Hudson. If the spill happened in the spring, much of the oil would reach New York Harbor because of the high flow rate of the river. Especially if spilled at low tide, a smaller amount would evaporate or come ashore compared to other seasons.

The percentage going ashore would range from 4 percent to 40 percent, depending in part on wind conditions. It would cover about 60 miles of shoreline in winter and about 35 to 40 miles in the spring and summer. If the oil ignited, about 5.3 acres would be affected by the burn. If it exploded, about 34 acres would be affected. “There is a significant possibility of human injuries and fatalities,” the report states. “Evacuation of about one-half mile around the spill site would be recommended.” If the oil burns, much less would enter the river.

However, those numbers ignore the most notorious oil-train accident, the 2013 derailment and explosion in Lac-Mégantic, Quebec, just 11 miles from the U.S. border, that leveled a neighborhood, killed 47 people and caused an estimated $1 billion in damage. In December, the Associated Press found errors in the Regulatory Impact Analysis that would add between $48 million and $117 million to the benefit numbers. A representative for the Department of Transportation declined to answer questions about the Regulatory Impact Analysis. 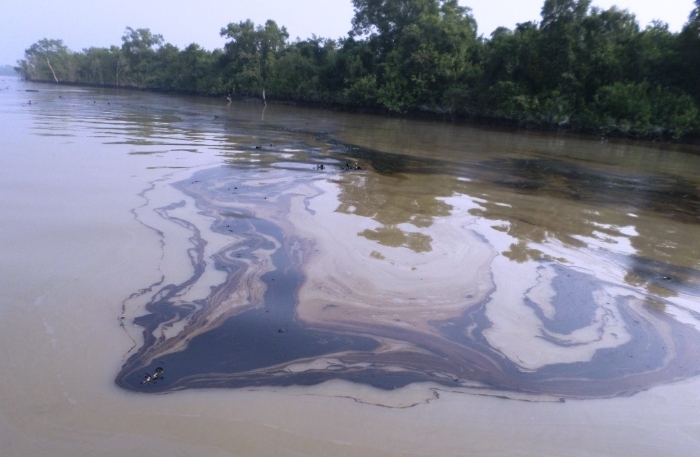 What It Looks Like: A 2014 spill put 92,000 gallons of oil into the Shela River in Bangladesh. It eventually spread over 140 square miles. (Photo by Kallol Mustafa)

Even if fewer trains carry crude oil along the Hudson, Bowermaster said he is concerned that the river will continue to be a corridor for moving oil, whether by pipeline, barge or train. “That only ramps up the risks, and we all know the risks of a spill,” he said.

In its report, Scenic Hudson examines some of those risks and the factors that could affect the severity of an accident such as location, season, tide, wind, salinity and the amount of ice in the river. In all, the group considered 77 scenarios, including five that involve fire and explosions.

The study also examines the effectiveness of cleanup methods, from booms and skimmers to genetically engineered oil-eating bacteria, as well as ways to improve response time. It notes that “spill response will always be less effective at reducing oil spill risk than prevention of spills in the first place.”

3 thoughts on “Bracing for Impact”