For such a globally embraced culinary staple, salt cod is sometimes a tough sell for a culture such as ours enamored of “freshness.”

An innovation of European exploration and discovery in the northwestern Atlantic, salt cod is the result of plentiful populations of a sought-after fresh seafood.

Coupled with one of the oldest known methods of preservation, drying, salted codfish has a shelf life of several years, although I would advise looking for fresher stock. The process not only preserves the nutritional value and texture of this firm, white fish, but also somehow makes it tastier, due almost certainly to the ample salt.

Cod and salt both contributed mightily to a burgeoning world economy and their stories make for entertaining history in Mark Kurlansky’s Cod: A Biography of the Fish that Changed the World and Salt: A World History.

Due to the seemingly limitless supply of Newfoundland cod, by the mid-16th century, about 60 percent of all the fish consumed in Europe was cod. Brits salted and dried it to establish a year-round market, hence the British epithet, “winter fish.” Salt cod made its way back to Europe and was embraced by the French, Spanish and Portuguese. From there it was further passed on to the West Indies, supplying island staples such as Jamaican ackee and salt fish.

In the New World, salt cod remains a Mexican staple, particularly on Christmas Eve, where it appears dressed in a spicy tomato sauce with almonds and green olives, after a Spanish antecedent which included cured ham and dried chilies.

Notes about prep: I secured salt cod through Marbled Meats in Philipstown but have seen it in one- and two-pound boxes in supermarkets. Be sure to thoroughly soak and rinse the fish and note that no additional salt should be added until tasting near the end.

Also, you can buy blanched almonds but usually will only find them slivered. Blanching your own is a simple process. The advantage is textural because they become almost giant pignolis. As for green olives, almost any will do, but look for Spanish Manzanilla or Gordal varieties. 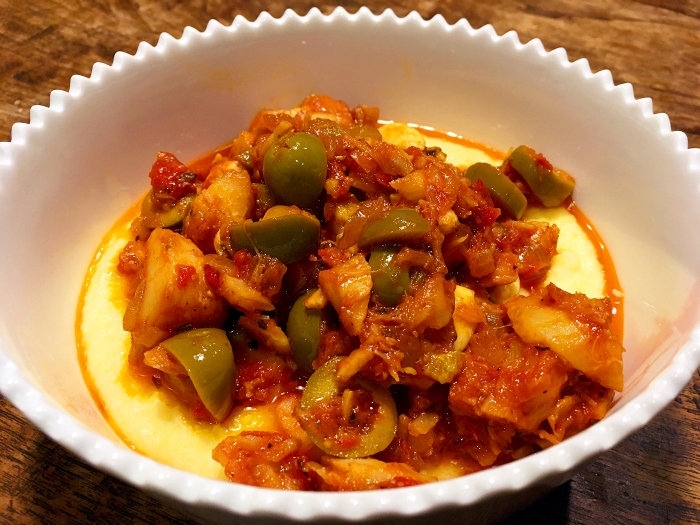