The Haldane High School boys’ lacrosse team flexed its muscles in its season opener on March 20, with the Blue Devils controlling Irvington in a 9-4 victory that was never in question.

“We were in control,” said Coach Ed Crowe, “and we got going as the game progressed.”

The Haldane team, which went 11-7 last season before losing in the Section 1, Class D quarterfinals to eventual state champion Pleasantville, returns virtually its entire starting lineup. They are 2-1 so far this season after a 9-4 loss to Eastchester and a 13-5 victory over Newburgh. 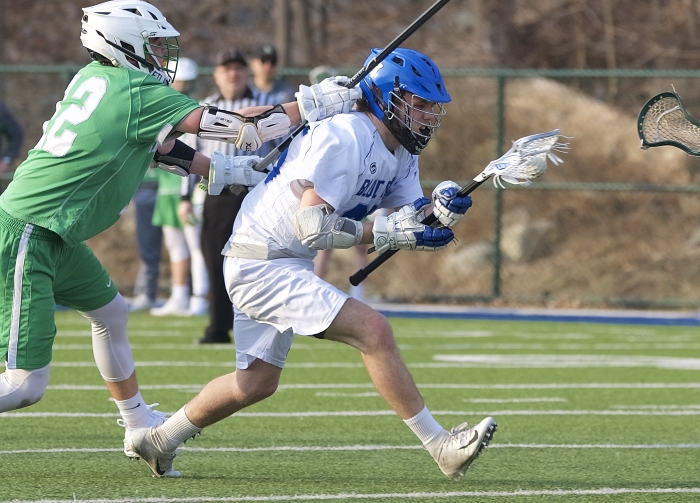 Sam Giachinta (right) had a goal and two assists in the Blue Devils’ season-opening lacrosse win over Irvington. (Photo by S. Pearlman)

(Giachinta, who had four goals against Newburgh, joined Diba in the 100-point club in that game.)

The Blue Devils lost All-Section midfielder Brandon Twoguns and All-League midfielder Kyle Zimmerman to graduation in 2018, but senior Will Westerhuis, Beachak and Diba again lead the attack, Giachinta, Santos and Johansson are at midfield, and senior captain Josh Lisikatos, senior Brad Dowd and junior Alex Kubik anchor the defense. At goal, Hankel is in his fourth year as a starter.

“We have some good pieces in play,” Crowe said. “If they continue to buy into sharing the ball, we have the potential to be very good.”

Joining the team are juniors Jesse Sherman and Zeph Barrios, and Percacciolo, a senior, at midfield. “Their energy, aggressiveness, and ability to learn has impressed me,” Crowe said. “Our depth will be one of our strengths.”

The Blue Devils are scheduled to travel to Blind Brook on Wednesday, April 3, and host Rye Neck on April 8.