To some they are music to the ears — a sweet, vernal serenade, nature’s way of celebrating spring’s long-awaited return.

To others, they produce a never-ending, obnoxious nocturnal noise that could easily be the soundtrack to a horrifying science-fiction movie.

The sound of spring peepers, a type of tree frog (Pseudacris crucifer), is unmistakable. On an evening drive past wooded lowlands, ponds or swampy areas, even with the windows up and the radio on, their call cannot be ignored. 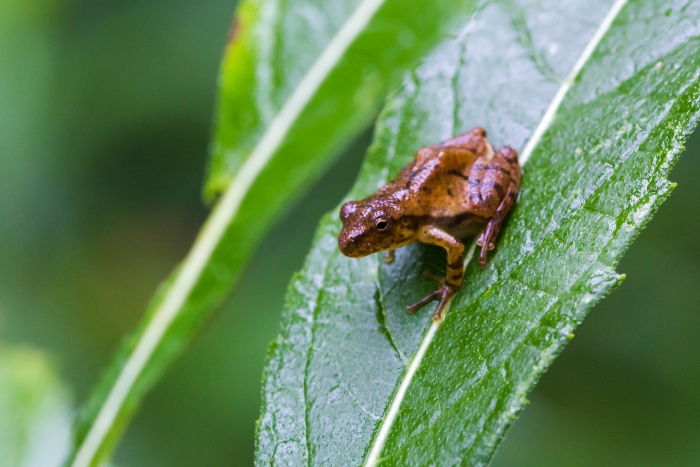 A peeper can improve its camouflage by making itself a bit lighter or darker to blend in more effectively. (Photo by Melissa McMasters/Flickr)

Collectively they produce a huge sound, but the frogs are tiny. A mature adult is barely an inch long. The males do all the singing, usually in trios, in an attempt to attract a mate. They peep out their high-pitched calls as often as 20 times a minute, with the loudest and fastest having the best chance of success. Females also apparently prefer the larger males.

To get into singing mode, peepers inflate a balloon-like sac under their mouths. Their peep is created by passing air over their vocal cords and into the sac. They perform mostly at night but may break into song on dark, cloudy or damp days.

Breeding season lasts from March to June. Each female lays 800 to 1,000 eggs in shallow ponds; the eggs hatch into tadpoles within about 12 days. By July they have morphed into frogs.

Spring peepers inhabit a wide range, from southeastern Manitoba to the southeast U.S. During mating season, they move no more than about 18 feet from their place of birth. For the rest of the year, they stay within about 130 feet. 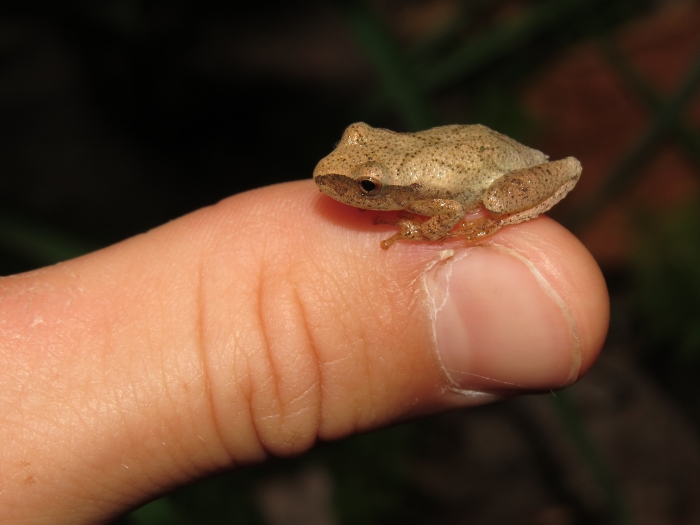 Spotting them usually involves patience and keen eyesight. They are well camouflaged, by varying shades of brown, gray and olive, although they can sometimes be yellow or reddish. Lines form an “X” on their backs, there is a dark line between their eyes, and there are dark bands on the legs. The underbelly is cream-colored or white. A peeper can improve its camouflage by making itself a bit lighter or darker to blend in more effectively.

Peepers have a creative streak when it comes to survival. While many frogs bury themselves deep during the winter, peepers produce a sort of “antifreeze” that enables their vital organs to survive.

As much as 70 percent of their body can freeze, stopping the heart. To the casual observer they appear to be dead. Scientists don’t yet understand exactly how it happens, but in the spring, the peepers thaw out and awaken and, after a period of healing, go on with life. It’s a trait they share with the western chorus frog.