John Connor, who neglected to pay what he owed Mr. Perry for groceries, was stopped by the village constable as he boarded the milk train. He pleaded poverty but then, after being placed in a cell at Village Hall, suddenly recalled he did have some cash. 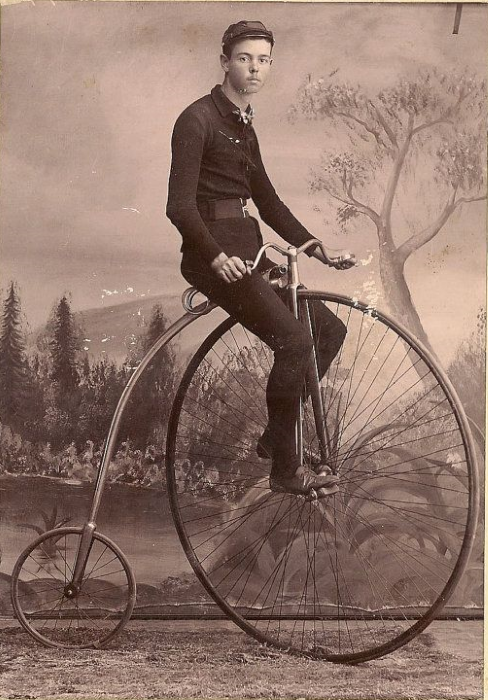 A performer with a velocipede came to the village for an exhibition at Town Hall. During the show, on the street outside, a man named Charles Merrick confronted a group of girls walking home from the Baptist Church. He pointed a pistol at the group and threw one girl to the ground. The pistol was taken from him by officers, who let him go home. When he was later located, he was declared insane and taken to Carmel by Sheriff Butler.

Two ships capsized on the river due to high winds. The stern of a schooner, the Crandell of New Jersey, was charred when the stove in the cabin tipped over before the water put out the flames. The Thomas Jefferson of Stamford lost the load of pig iron on her deck but the coal in her hold carried her down in deep water. The crew was saved and a “submarine diver” later lowered its sails.

Thomas Fitzpatrick, 24, who left in January for a job at a mine in Mexico, traveling by steamer to Galveston, by steamer and sail to Corpus Christi, by stage to Loredo along the Rio Grande and the final 250 miles on mule, was diagnosed with bilious fever on his arrival and died 51 days after he had left Cold Spring.

Col. Barney of Peekskill delivered his temperance poem, “The Social Drink — Its Cause and Cure,” at Town Hall.

A prediction in Blake’s History of Putnam County was fulfilled with the completion of a home by Catharine Haight on the northeast corner of Main and Crown: “Nelsonville is only a continuation of Cold Spring, and is built on the reverse slope of the hill on which the former is located. There are a few rods of ground intervening, upon the top of the hill, but they will soon be covered with houses.”

Charles Nixon resigned his position as clerk at Perry & Reilley grocers and will open a confectionary and ice cream saloon on Main Street near Market.

Contractor Fred Camp, of Cold Spring, installed a steam heater in the county poorhouse in Carmel.

An unknown man “supposed to be a brickyard laborer or tramp,” was struck by the Empire Express near Breakneck and killed.

At the meeting of the Village Board, Colin Tolmie said that although he had been removed at the last meeting as clerk, the action was illegal and he was still clerk. After Trustee Mosher said he did not intend to take instruction from the ex-clerk, the trustees voted for a new one. But after seven ballots, it was still two votes for Tolmie and two for Irving McCoy. At the next meeting, after three more ballots, Joseph Barry was elected clerk.

John Henderson of Cold Spring, while visiting New York City, was knocked down by a man who took his watch and pocketbook, which contained $12. The thief was detained by bystanders, but not wanting to remain all night in the city, Henderson said he would not prosecute if his property was returned. The thief disappeared but when opening his pocketbook, Henderson found the cash was gone.

A couple of “gypsies” encamped at Sandy Land performed an impromptu show at Kemble and Main of acrobatic tumbling and lifting.

F.G. King of Garrison offered a reward for the return of his peacock, which strayed away from his residence.

Richard Belton, the road commissioner, hauled a large scraper over the Garrison roads to even out the ruts and rough places.

Justice Nelson committed Mary Higgins, not yet 16, to the State Industrial School at Rochester on a complaint by her mother.

An item reported in an issue of the Cold Spring Recorder — that trustees of public schools by law must provide a U.S. flag to anyone who asks — was debunked in the following issue as fake news.

Officer McCaffrey arrested James Fitzpatrick for “wandering about the street and acting in a crazy manner,” according to the paper.

The state Legislature approved $12,000 to build a road from the State Camp at Peekskill to the Highland Station. It will be cut into the mountain and pass over the tunnel at Anthony’s Nose.

The Village Board noted that under the poll tax law, each resident would be charged $1 to vote in village elections.

The Hayes Construction Co. resumed work on the Storm King Highway along the Hudson opposite Cold Spring. The firm is blasting a “shelf” into the side of a cliff 400 feet above the river. When completed, the road will shorten the route from Albany to Weehawken by about 20 miles. 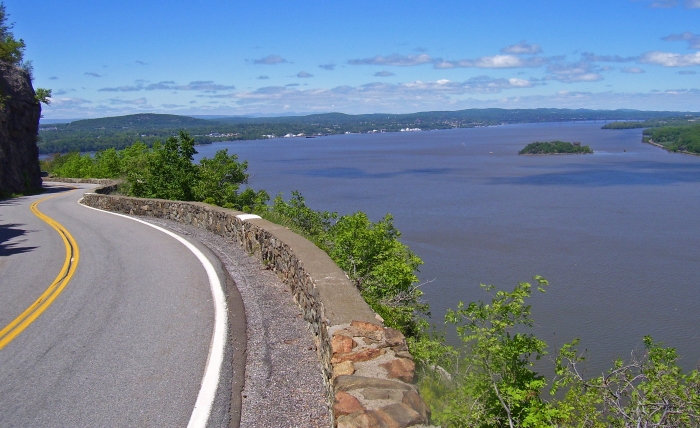 A “Welcome Home” sign was constructed on Depot Square to greet soldiers returning by train from the war in Europe, which ended the previous November.

At the annual meeting of Cold Spring Fire Company No. 1, its secretary noted that the organization had answered 103 fire alarms since its founding in 1896, including a record nine in 1901.

The Board of Trustees asked the Army to release Dr. Ralph Hall, stationed at a military hospital in New York City, because the one remaining doctor in the village is “in danger of breaking down from overwork.”

The manager of the Newburgh Shipyards invited the village president and 30 other guests to the christening of the S.S. Cold Spring, a 9,000-ton ocean traveler. (The ship would sail until 1931, when it was scrapped.) 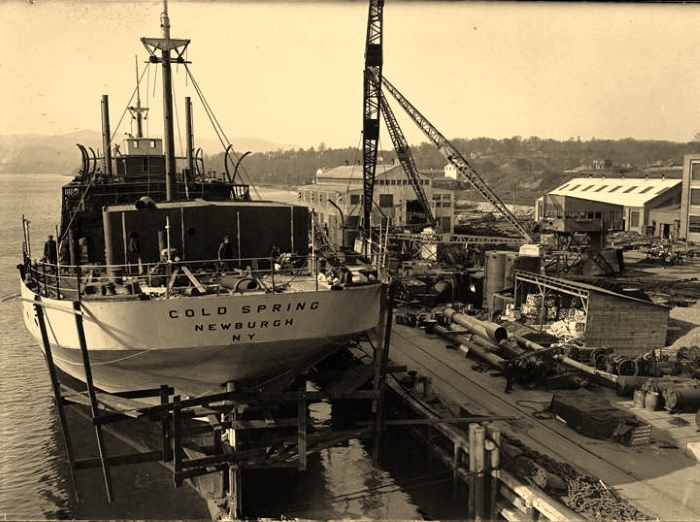 A body found floating in the river about 500 feet west of King’s Dock in Manitou was identified as Ackley Schyler of New York City, who apparently committed suicide by jumping off a steamer. A funeral was held at St. Mary’s and he was buried in Cold Spring Cemetery.

Two of the elderly executors of the estate of Julia Butterfield happened to die on the same day, leaving Albert Hagar as the sole executor. Hagar said he hoped that the legal disagreements over $1 million left by Butterfield to the YMCA for soldiers and sailors could be settled to clear the way for the construction of a hospital and library in Cold Spring.

A helmet, gas-mask and knapsack used by George Lusk of the 37th Engineers in the great conflict were on exhibit in the window of Dalzell’s drugstore.

Low on oil, a seaplane carrying the silent-film actress Dorothy Dalton from New York City to Albany made an emergency landing on the river near the Main Street dock. The plane had left Keyport, New Jersey, at 3 p.m. on its way to publicity events to sell war bonds. 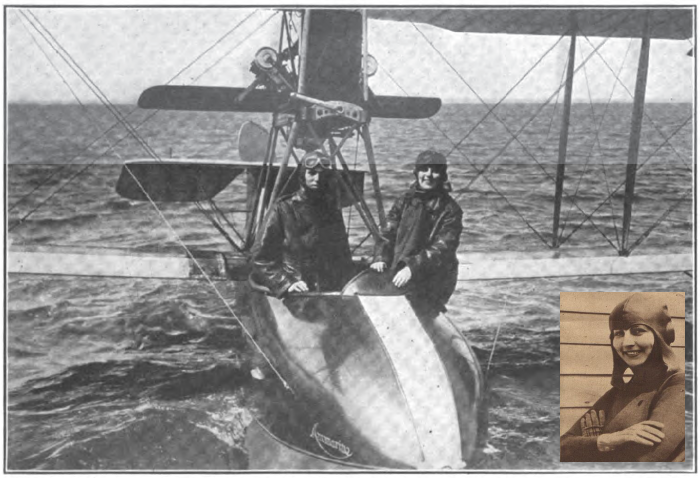 A pilot and actress Dorothy Dalton in April 1919 aboard the seaplane that landed in the Hudson near Cold Spring. (Aerial Age Weekly)

Lt. Eric Purdon, of Garrison, took command of the newly completed PC-1264, a 173-foot submarine chaser and the second naval vessel to be manned by a predominantly black crew.

A Sunday evening show at the New Hudson Theatre was interrupted when someone yelled “Fire!” There was no fire, and the manager, Joseph Mirarola, thanked patrons for remaining calm.

At its monthly meeting, the vestry of St. Mary’s noted its annoyance at “the growing use of the church grounds as a thoroughfare for the public.”

Pvt. Mary Nolan, of Church Street, was awarded a Good Conduct ribbon after she reached one year of service on duty in North Africa as a supply clerk with the Women’s Army Corp.

John Hrusa attended a service at St. Mary’s Church. The Cold Spring native is recuperating at the Naval Hospital from severe burns he suffered while fighting a fire on his ammunition-laden ship, which eventually sank.

Mr. and Mrs. Carl Ahlers reopened their home for the summer at Little Brook Farm in Garrison. They wintered at the Van Rensselaer Hotel in New York.

The Hudson River Valley Commission denied an application to build an eight-building apartment complex on the river in Cold Spring. Its principal concern was that the 8.2-acre parcel was “best suited for open space or park purposes.”

The Butterfield Library held its annual Laura Spencer Pope Shakespearean Celebration with a screening of a 50-minute color film, The Life of Shakespeare. Pope, who lived in Garrison, was a journalist, science-fiction writer and founder of the Shakespearean Foundation.

Haldane basketball star John Zuvic received an athletic scholarship from Siena College in Albany. He finished his three-year varsity career with 989 points and averaged 25 points per game as a senior.

Using a stopwatch as he drove, a reporter for The Putnam County News & Recorder offered a front-page “special report” on the amount of time he waited at the 39 stoplights on the 11.5-mile stretch between the Dutchess Mall and Poughkeepsie.

The president of the Putnam County Historical Society reported that the state historical marker on Route 9D that indicated the location of Benedict Arnold’s flight from the Beverly Robinson House in Garrison had been stolen. 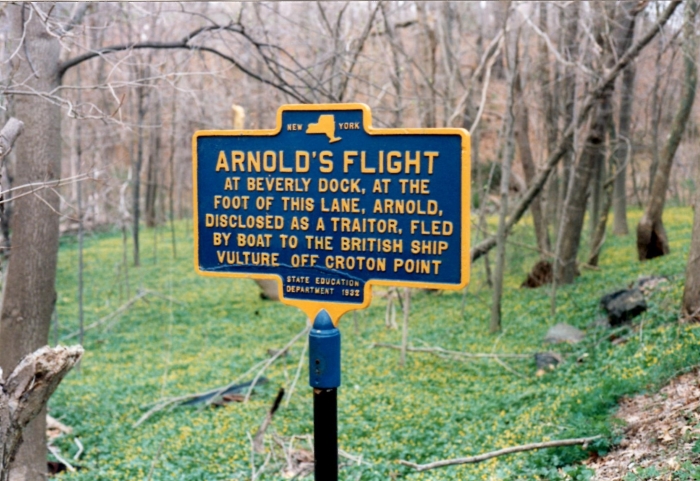 The sign that marked the path of Arnold’s flight.

John Berntsen of Garrison, who was a junior at Bucknell, presented the results of his study, “The Morphology and Sedimentology of Alluvial Fans and Debris Fans in the Valley and Ridge Province, Central Pennsylvania,” at a regional meeting of the Geological Society of America in Binghamton.

A baby harbor seal was spotted near the Yacht Club at Garrison’s Landing.

3 thoughts on “Looking Back in Philipstown”