Gavin McInnes, who lives in Westchester County, is best-known as the founder of The Proud Boys, an organization he refers to as an all-male “Western chauvinist” drinking club but that the Southern Poverty Law Center classifies as a hate group and Twitter considers a violent extremist group. One would think that he’d be hard to offend.

And yet, on Dec. 28, McInnes sent letters to his neighbors in Larchmont asking them to remove yard signs that had been posted around the neighborhood that he felt were directed at him. The signs, which were created by a Chicago community organization and designed to be nonpartisan (blue on one side and red on the other), feature a U.S. flag in the shape of a heart and the words “Hate Has No Home Here” in several languages. 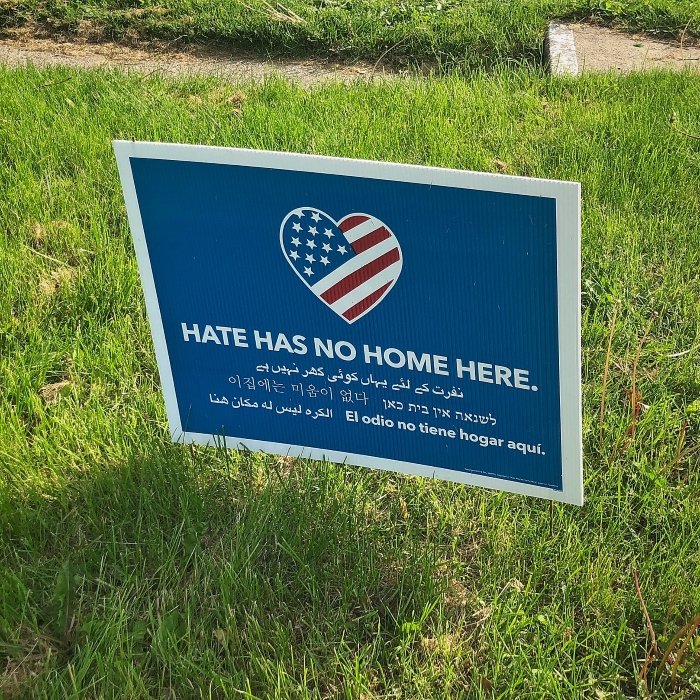 A Hate Has No Home Here sign spotted in Beacon (Photo by B. Cronin)

The news of McInnes’ letter and the signs caught the eye of a member of  the Dutchess County Progressive Action Alliance. At the time, anti-Semitic fliers had been posted at several Beacon churches and Dutchess County colleges. The activist, who asked that her name be withheld for fear of retribution by racists, thought the signs could serve as a response to the fliers.

“I thought they were beautiful signs,” she said. “And they were conveying a beautiful message that needed to get out there.”

The members of the alliance decided to raise $100 to buy signs to distribute. But when the group created a GoFundMe campaign in February, within three weeks enough money came in to purchase 1,000. (To date, it has raised $3,500 from 74 people; see gofundme.com). The printer warned them that the delivery would be the size of a small car.

“We looked at each other and said, ‘Oh my gosh, now what do we do?’ ” she said. “If anybody wants materials, we give them materials.”

Story of the Signs

The Hate Has No Home Project was born in a neighborhood in Chicago where 40 languages are spoken at the local elementary school.

Carmen Rodriguez and her neighbors in North Park had organized several community projects such as Ribbons of Peace (residents put ribbons on their front railings to promote their community as a peaceful one) and All Are Welcome (signs created in response to the mass shooting in June 2016 at Pulse, a gay nightclub in Orlando).

But in the fall of 2016, a surge in anti-immigrant sentiment prompted the group to create a new campaign. “Our community is particularly sensitive to the issue of foreign nationals not being welcome,” said Rodriguez. Two students at the elementary school suggested the phrase, “Hate Has No Home Here,” a local artist came up with the design, and signs went up around North Park.

“What we didn’t count on,” recalled Rodriguez, “was the power of the internet. It got a lot bigger than what we intended.”

Shortly after the November 2016 election, images of the sign started spreading online. Rodriguez had posted a link to the artwork on a community association’s homepage, and the traffic on Thanksgiving Day crashed the website.

“People were calling me, and I was yelling ‘I’m making pies!’ ” Rodriguez says.

Today the group has its own site at hatehasnohomehere.org where the artwork can be downloaded. It also has a map where visitors can learn where to find signs or note where they have spotted them, which includes lawns worldwide.

Requests for the yard signs, which have been spotted in Beacon and Philipstown, can be made through the GoFundMe page. The group also offers bumper stickers, window clings and buttons.

The activist said she is realistic as to what the campaign will accomplish. Referring to a white supremacist group based in Fishkill that The Current reported on last week, she remarked: “That group is not going to see these signs and say ‘Oh my goodness, we’re bad people.’ But I’m hoping that people who feel that it’s appropriate to discriminate and do cruel things will realize that there are a lot of people here who don’t agree with them. And the more of these signs that we can get up, the more they’ll have to see that.”