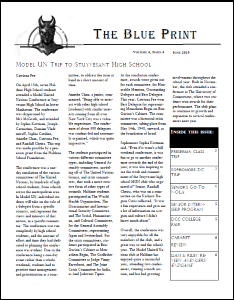 Five times each year, the members of Jenna Isabella and Ashley Linda’s journalism class at Haldane High School publish a school newspaper, The Blue Print. With support from the Haldane School Foundation, reporters and editors from The Current are working with the students to craft their stories and share their reporting with the community. Selections from the latest issue appear below.

Class of 2019 Expands Its Horizons

By Riley Bissinger and Katelyn Pidala

Late March in New Orleans brings temperatures in the 70s and fresh spring air. The city is alive with culture: art, music and dancing. The Haldane High School Class of 2019 experienced all of this on its final class trip.

The students arrived in New Orleans on March 26, excited and ready for their days in Louisiana, despite only having a few hours of sleep.

Throughout high school, the Class of 2019 has been fundraising and preparing for its senior trip. This year’s trip was a little different from other year’s, mainly because of the change in the service learning experience. The service learning aspect involved working with Arc Bead Center and Ms. Gloria’s Garden. Both were great experiences for the class to engage with the people of New Orleans while also helping out their community. 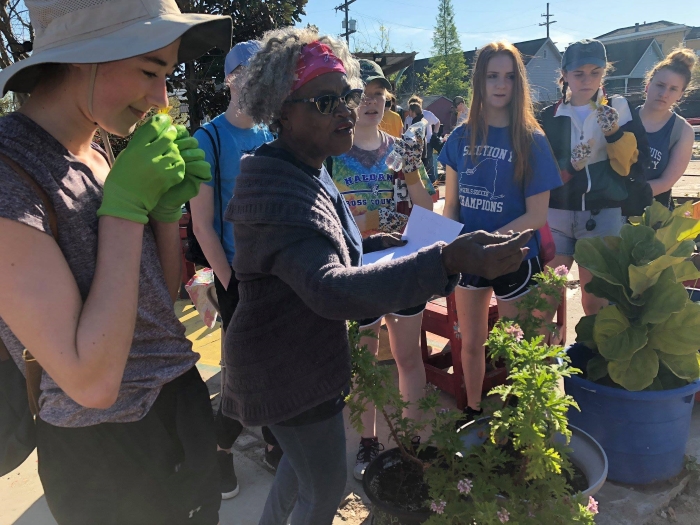 At the Arc Bead Center, the class helped organize donated Mardi Gras beads. The center helps employ individuals with intellectual disabilities who have a hard time finding work. The experience allowed for the class to learn about the Mardi Gras culture in New Orleans as well as the meanings of different types of Mardi Gras beads.

The other service learning aspect of the trip was with Ms. Gloria’s Garden. This community garden helps supply fresh produce to the homeless of New Orleans. The class was able to help plant, decorate, and refurbish the garden with the guidance of Ms. Gloria herself. Many students helped by painting a wood slab or rock, decorating it to fit a specific plant. They would then add the health benefits of that plant, such as symptoms it could help treat. 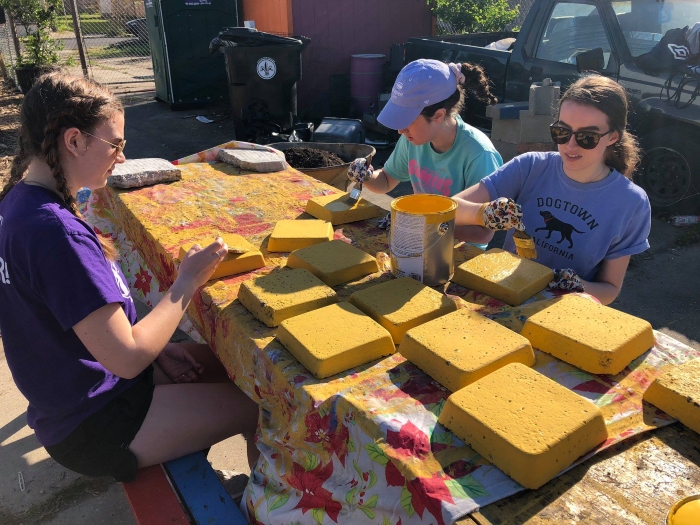 Aside from community service, the seniors also got to experience the rich culture of New Orleans through a swamp tour in which students got to see alligators and wild boars, a cruise on Steamboat Natchez with a seafood dinner included, and numerous trips to cafes and restaurants. Cafe Du Monde in particular was a highlight for the seniors, as they got to eat beignets and listen to street music.

Haldane seniors ended their high school careers participating in the ASPIRE internship program. Some students continued working at their regular jobs, while others interned with a new business.

The program ran from May 20 through June 7, which gave students an opportunity to experience life outside the walls of Haldane and an experience they can put on their resume.

Students were required to complete 20 hours of paid or unpaid work with their business. In order to be eligible to participate, seniors had to be passing all of their classes by the end of the third quarter. At the conclusion of the program, students gave a presentation to their English class to receive a fourth-quarter grade.

The internship coordinator, teacher Melissa Seideman, shared her thoughts on the program. “Some people may have never worked before, so this experience should help them prepare for later in a workplace environment,” she said. “Most seniors are probably burnt out from their normal classes, so this should be a positive change before graduation.”

Seideman said she is pleased with the increased participation rates over the years. “Three years ago, only 63 percent of seniors participated in internships, last year we had 93 percent, and this year we have 100 percent.”

Some students use the experience to try new things and see what they might be interested in pursuing in the future. In the past, some students have commented that they’ve ruled out a future career based on the internship — something they’d rather discover now while there is still plenty of time to decide on a career path.

Senior Justin Markey, who’s interning at Marc’s Landscaping, said, “I’m glad to be getting some real world experience outside of class.”

As sophomores from Haldane walked around the Capitol Building during a trip in March to visit Washington, D.C., the shadow of the Statue of Freedom loomed over them in the early morning sun.

The group waited to be met by Rep. Sean Patrick Maloney (NY-18) to take a private tour around the building. He arrived just after a congressional vote to reject the president’s veto on a resolution that would have overturned his declaration of a national emergency at the border.

The representative spoke about many varying topics from firearm awareness and activism, to immigration and what his colleagues are trying to achieve, to issues regarding the state of Congress and increasing tensions between the Democratic and Republican factions.

In the middle of the conversation, a Republican congressman quickly waved and shouted at Mr. Maloney. He waved back and explained how friendships within Congress have no political bounds. He took questions and briefly explained the importance of teen activism: “Your generation is the most politically active in my lifetime. The things that you have achieved have significantly changed the political discussion in Congress.”

Eventually, after questions and discussions, the representative lead the sophomore class on a private tour of Capitol Hill. After passing through expansive security, the class followed the representative through hallways, corridors, passed the offices of House and Senate whips and leaders, and through a small, marble spiraling-staircase and onto the Speaker’s Balcony. 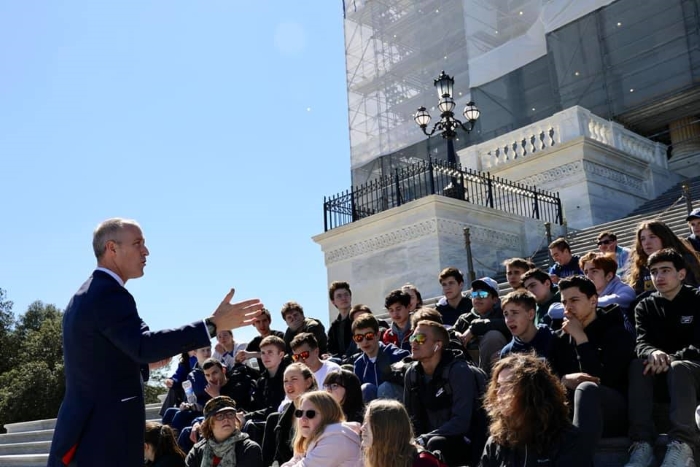 The class moved off the balcony and into the rotunda as more photos were taken of the dome. While making their way through the Capitol Building, some students ran into Speaker of the House Nancy Pelosi as she was making her way to her office. There was a buzz of excitement as Pelosi quickly greeted Rep. Maloney and his daughter (present on the trip) and moved on.

The rest of the day was spent walking along the National Mall, photographing monuments, passing by federal offices and buildings, and entertaining extended conversations and explanations of the day in politics — President Donald Trump had visited the Capitol Building just before the class’s arrival.

Over the next few days, the group visited a number of other historic sites: the Lincoln and Martin Luther King Jr. memorials, the Vietnam and World War II memorials, the Marine Corps War Memorial, the United States Holocaust Memorial Museum, the Newseum and the Washington Monument.

The second day ended with a production of Sheer Madness at the JFK Center for the Performing Arts — an interactive comedy in which the audience must question, theorize and vote for a possible murderer. The show was filled with jokes ranging from football and sports, to politics and the Mueller Report.

The third day ended with a fancy cruise on the Potomac, with a dinner dance. On the last day, after packing up and cleaning their hotel rooms, the class visited Arlington National Cemetery. As students and chaperones respectfully walked through the site, several funerals and burials of American veterans were occurring. Finally, the group visited the Tomb of the Unknown Soldier.

Cabaret was “byootiful! (…) but don’t take my word for it… ” (actually…. do!). The musical Cabaret was written by Joe Masteroff in 1966 and was brought to life by Haldane Drama’s 2019 production, directed by Martha Mechalakos and assistant director Andrea McCue. It was choreographed by Katie Bissinger, with inspiration from the original choreographer of the film, Bob Fosse.

The plot follows an American writer, Clifford Bradshaw (played by Andrew Nachamkin and Noah Bingham) who comes to Germany to write a novel and instead discovers a muse in Kit Kat Klub performer, Sally Bowles (played by Freya Wood-Gallagher and Lindsay Phillips)

A scene from the Haldane production of Cabaret

As Cliff watches and Sally is oblivious, troubles in Germany become worse. The Emcee (the eccentric Master of Ceremonies played by Justin Roffman and Quinn Petkus) comments on the life of Sally and Cliff and the problems rising in Germany with laugh-inducing musical numbers at the Cabaret.

Cabaret is funny, but dark. It disguises the theme with humor and tricks the audience into thinking it is going to be a light and fun musical. As it progresses, it shocks people into realizing what the show has been about the entire time. This look into Nazi Germany truly makes the audience think, as it shows this world from multiple perspectives. Every character has a different outlook and background and is affected differently by what is happening in the world around them.

This production of Cabaret was double cast. Both of the actors that played Emcee, Roffman and Petkus, were very different, but both portrayed the character perfectly. They were hilarious, and as the show goes on the Emcee slowly gets darker, and the humor begins to become the perfect amount of uncomfortable.

Roisin Daly, who played Fraulein Schneider, was heartwarming and heartbreaking. Another notable factor was the choreography. Katie Bissinger had worked hard to choreograph the musical numbers and make sure every dancer was doing just what she wanted. The set and costumes were also incredible. The set perfectly fit the mood of the show and the costumes were colorful and all very different.

Cabaret was a wonderful show to see, the entire cast, under the direction of Mechalakos, put their hearts and souls into making this production the great success that it was. It is a musical that leaves you thinking about it, searching for the hidden layers.