Studying anthropology at Hunter College may have given Mia Klubnick the tools to analyze social groupings, but seven years in Brooklyn working for coffee roasters and managing a cafe gave her the chance to truly observe human interaction.

The Putnam Valley native (her father, Dennis, grew up in Cold Spring and her parents met at a New Year’s Eve costume party there), Klubnick grew up “baking with my mom, surrounded by baked goods, basically obsessed with baking.” 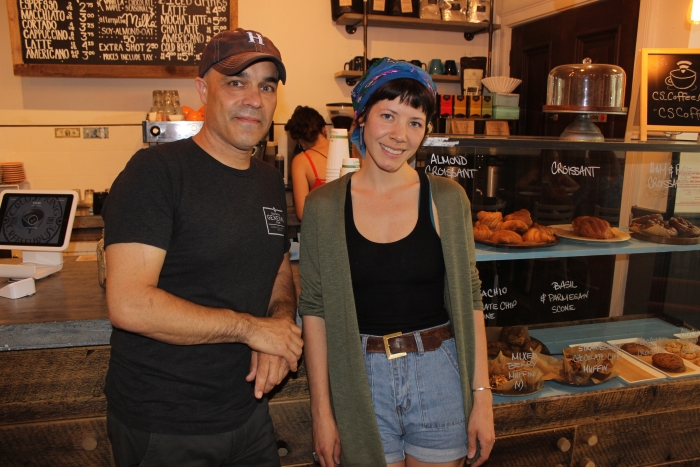 Joining her skills, she is now happily engaged as the manager and baker at the Cold Spring Coffee House, which debuted — to lines out the door — on Memorial Day weekend. It is open from 8 a.m. to 5 p.m. Tuesdays through Sundays.

Inside, customers will find a menu of espressos, cortados, macchiatos, mocha and chai lattes, hot and iced, as well as “ice cold brews,” which are “steeped for 24 hours in cold water and are quite concentrated,” Klubnick explains.

The coffee comes from Stacks, an Albany roaster with five regional cafes; Cold Spring Coffee House is their first wholesale client. Its product is used for the house coffees, drip and espresso, and there are also guest roasters. This month it’s Big Mouth from Beacon. 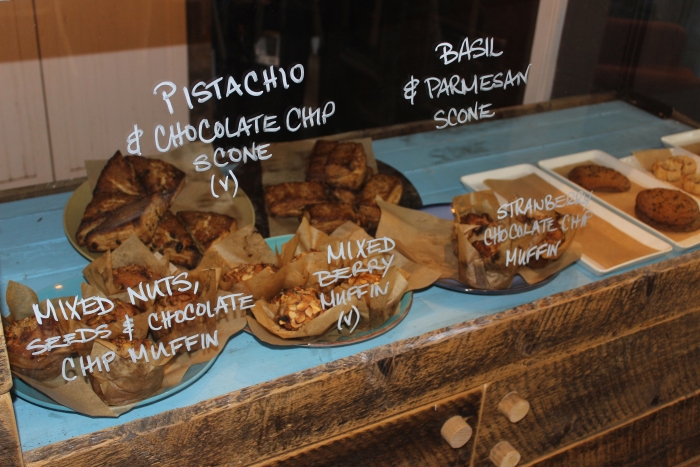 Flavors rotate frequently in baked goods such as savory and sweet scones and muffins. (Photo by A. Rooney)

Croissants are on hand daily, along with Danishes, muffins and scones, some with unusual flavor combinations like strawberry and basil. There are always three or four vegan items. Over the coming months, Klubnick says, she plans to expand into sandwiches and other lunch things, particularly for hikers.

Klubnick returned to the area a few years ago from the city, and a chance conversation at Split Rocks Books led to an introduction to Craig Roffman, who owns the property at 92 Main St. and wanted to launch a community coffee house.

Roffman, who has lived in Cold Spring for 24 years, has worked as a real-estate agent for many of them. His background also includes building houses, and he began his working life here running a wholesale clothing business. With input from Klubnick, Roffman and his contractor renovated the space, aiming for what he describes as a “hip, industrial, vibe that also connects with Cold Spring roots like the foundry.” 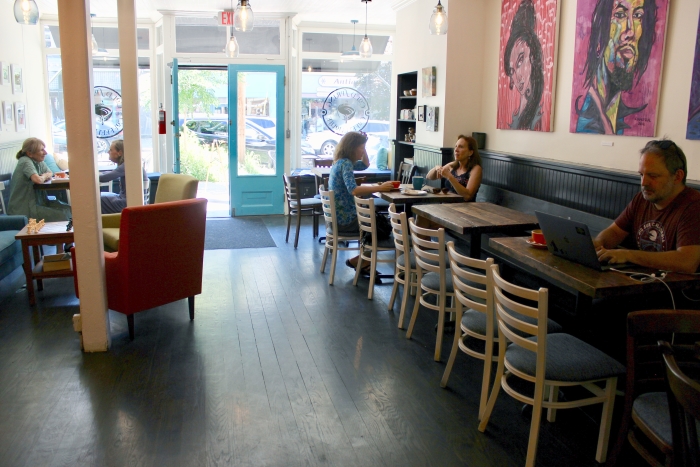 Conversations, art on the walls, laptop concentration. (Photo by A. Rooney)

There are visible iron pipes, Edison lamps and tables made from reclaimed horse barn floors. Roffman helped finish the counter concrete-pouring himself. All the supplies — cups, straws, and other items when possible — are bio-degradable.

By reconfiguring, the seating was increased to 48 from 14 when the Cupoccino Cafe occupied the space. The walls display the work of local artists. All of it is for sale, with all proceeds going to the artists.

Despite the extensive renovation, Roffman admits the coffee house has, at times, had trouble keeping up with the demand. He is designing new refrigeration. “That’s our bottleneck right now,” he says.

Klubnick says during the week she sees mostly locals. Roffman adds that “there are a lot of new Brooklyn families in Cold Spring, and they’ve responded well. We’ve also hired a lot of young people, and we’ve trained them in coffee-making — including latte art — and baking.”

Klubnick says croissants are the most difficult to learn. “When you begin, you usually wind up with little loaves of bread, rather than the beautiful layers,” she says. “It’s a three-day process. Now we have a dough sheeter, which has changed everything.”

Roffman interjects: “Now I know why you hugged it when it arrived!”