Nelsonville got a new trustee on Monday (July 22) when its Village Board appointed Chris Winward to fill the vacancy created by Michael Bowman’s move from trustee to mayor.

Bowman succeeded Chris Caccamise, who resigned in March, two months after being elected. Under state law, the board can select one of its members to complete the term. In turn, the newly appointed mayor can select his successor as trustee and may ask the incumbent trustees to approve the choice. 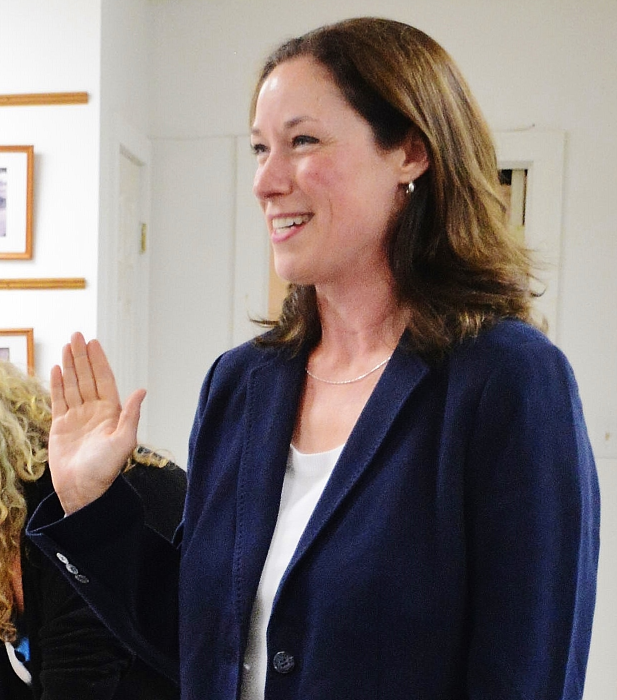 Chris Winward takes the oath of office to become a Nelsonville trustee. (Photo by L.S. Armstrong)

Winward is the vice president of administrative support services for Saint Dominic’s Family Services, a social services agency with offices in Orange and Rockland counties and New York City. She holds a master’s degree in public and nonprofit management and policy from New York University and an undergraduate degree from Siena College, has expertise in overseeing grants, and worked earlier in her career on the staff of the New York City Council.

“We have some big issues and challenges,” Winward said. “I look forward to serving everybody” and to “working with all of you and the community to address the needs.”

Winward’s husband, Chris Keeley, serves on the Zoning Board of Appeals.

The seats held by Winward and Moroney will be on the ballot in the spring, when the two-year terms expire. Whoever is elected mayor in March will serve one year, until spring 2021, to complete what would have been Caccamise’s two-year term. Nelsonville has about 380 registered voters.

At the meeting, two audience members raised the issue of short-term rentals such as those made through Airbnb.

A resident of Main Street, where many homes stand close together, said the house next to hers contains a one-bedroom apartment that rents on Airbnb for $180 a night.

On the Airbnb website, the listing, which promotes the unit as being “steps to the trailhead” at Hudson Highlands State Park, has only rave reviews and notes that parties are not allowed and that the space is not suitable for children. The owner says on the site that he lives in New York City.

Airbnb also lists a three-bedroom Nelsonville home owned by a Nashville couple that rents for $300 to $350 per night. 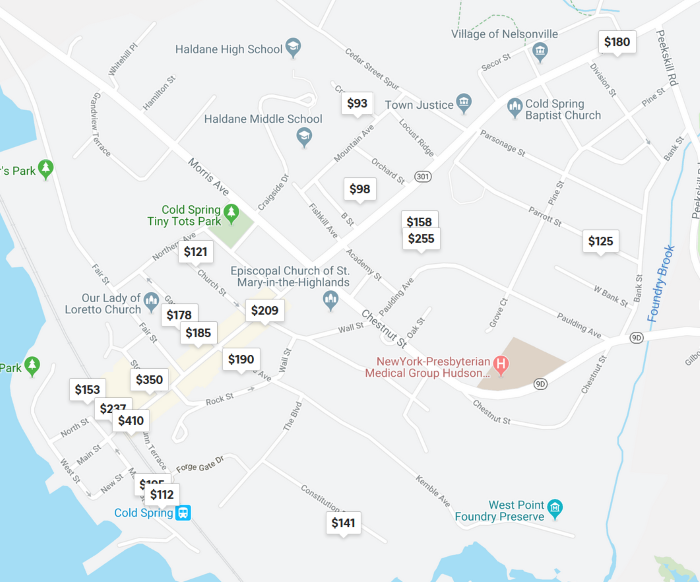 Airbnb rentals in Cold Spring and Nelsonville; the prices are per night (Airbnb)

The short-term rental question “has been on our radar for a while,” Bowman said. He remarked that such rentals have “become a supplemental income that’s very important” to some residents and add to the local economy when weekend guests patronize local establishments. Moreover, he said, “I have a hard time telling people what they can do with their private property.”

However, he promised to consult the building inspector and said that rental practices might be regulated through enforcement of safety standards and other requirements.

Nelsonville’s village code allows “the letting of rooms” to up to two guests at a time if the owner lives in the house. It prohibits cooking facilities in guest rooms, although an owner can offer breakfast or other board and allow guest access to the kitchen.

The board voted unanimously to spend an estimated $750 to $1,000 for an appraisal of the village-owned parcel on Secor Street that is being considered for a conservation easement with the Open Space Institute. After completion of the appraisal, the board plans to schedule a public hearing and possibly a referendum.

Peggy Clements, a Nelsonville resident who is a member of the Haldane school board, suggested that the 4-acre Secor site could be used by the school district.

“That’s the only place I can think of where we could maybe build something,” she said, explaining that she spoke as an individual, not as a representative of Haldane. “I’m reluctant about handing over any control of that property to anybody besides the village.”

Clements said the district has no plans for construction, but she also cited a lack of space at Haldane and within both Nelsonville and Cold Spring for new facilities.

The proposed agreement with OSI would allow the village to add a building to the site for “public use.”