The Cold Spring Village Board is considering to what extent food trucks should be allowed to operate on village-owned property.

The issue arose at the board’s July 23 meeting after Michelle McGuire, owner of Michelle’s Roadside Kitchen, set up her truck at Mayor’s Park on the weekend of July 20 and 21 without the permit required by the village. When she realized the permit was needed (she has one from the Town of Philipstown), she approached the village and applied.

At the meeting, trustees granted her permission to return to Mayor’s Park the following weekend, although a mechanical problem prevented that. McGuire said she will set up at Mayor’s Park on another weekend in the near future when there is not an event going on. 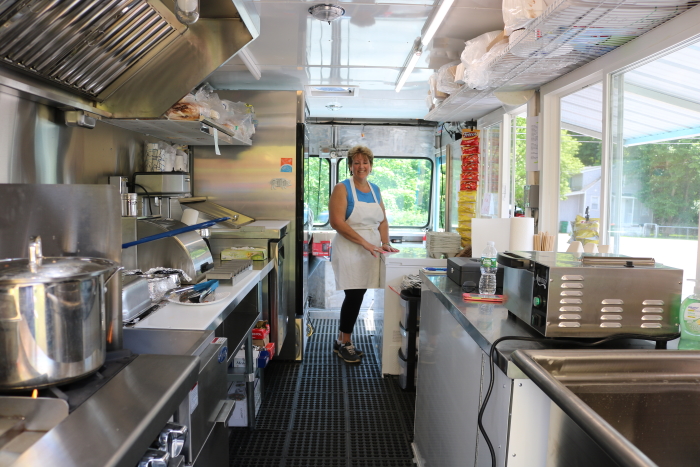 Michelle McGuire inside her food truck, which she will set up at Mayor’s Park as part of a “trial run” (Photo by M. Turton)

At the outset of the discussion, Mayor Dave Merandy asked his fellow board members if they objected, in principle, to food trucks in the village. No one objected.

During the public comment period, Bill Ehrlich, who lives across from Mayor’s Park, raised a number of concerns ranging from noise, smells, signage and traffic to litter and hours of operation.

Rebecca Ramirez, co-owner of The Cheese Shop on Main Street, said she supports food trucks, saying it brings entrepreneurship to the village and more diverse food.

Jeff Consaga, owner of The Foundry Cafe on lower Main Street, was adamant in an interview about his opposition. “We only have three or four good months to make our nut,” he said. “It’s hard enough to make a living” without the competition.

Doug Price, who owns Doug’s Pretty Good Pub, also opposes food trucks, saying “if they take just 25 customers on a Saturday, at $30 per check, that’s a lot of money to lose.”

Cold Spring resident Greg McElhattan, who recently sold the Greg’s Good Eats truck that he operated for three years, mainly on Route 9 in Philipstown, at Little League games and private parties, countered in an interview that “if restaurants fear a food truck, maybe it’s time they took a look at their menu and prices.”

McGuire usually sets up on Route 9 near Philipstown’s northern boundary. She is also considering the Haldane ball field on Route 9D.

She said she doesn’t feel setting up at Mayor’s Park is a threat to restaurants. “I’m not trying to take anything away from village businesses,” she said. “That’s why I’ve stayed at the edge of the village,” rather than closer to Main Street.

Merandy said allowing McGuire to operate at Mayor’s Park will be “a trial run” that will enable the board to assess its impact. After McGuire has been at the park for a second weekend, he said, a meeting will be held for discussion and to hear public comment.

Trustees are also discussed the merits of permitting a food truck at Dockside Park when the Seastreak cruise line begins docking in the fall. Local restaurants often struggle to serve the hundreds of visitors who arrive at the same time.

In an email, Eliza Starbuck, the president of the Cold Spring Area Chamber of Commerce said that “we appreciate the village trustees’ cautious, test-mode approach.”

The village code, currently being updated, doesn’t address food trucks but stipulates that “hawking and peddling” requires a license that costs up to $25 a day, or $100 per month. Merandy and other board members said the fees need to be reviewed. Philipstown and Nelsonville codes include similar requirements.

Dave Buckley, Beacon’s building inspector, said the city allows food trucks but there has been no demand for them. Its code prohibits vendors and peddlers within 200 feet of school property and 1,000 feet of similar businesses. Buckley said interest may be building for food trucks in Beacon’s riverfront parks, noting that there are no restaurants there.