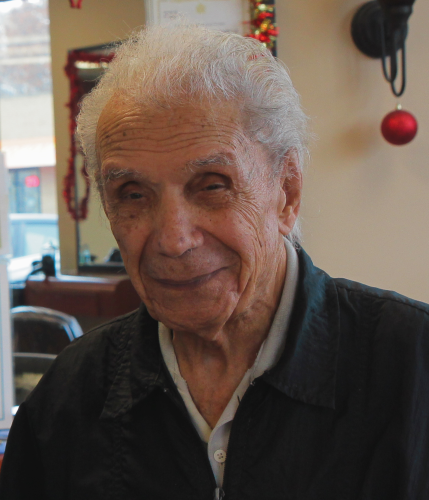 Anthony Mancinelli, 108, who earned a place in Guinness World Records as “the oldest working barber,” died at his home in Newburgh on Sept. 19. He worked until July at Fantastic Cuts at the New Windsor Mall.

Mancinelli was born March 2, 1911, in Montemilone, Italy, the son of John and Savino (Madrisi) Mancinelli. He came to the U.S. with his family in September 1919, at age 8, on the Caserta to join his father, who had established himself in Newburgh. Woodrow Wilson was the president; there have been 17 others since.

Life was not easy for the new Americans. “There were eight kids in the family and my father only earned $25 a week” at a local factory, Mancinelli told The Current in 2017. “We ate a lot of bread, I can tell you that.”

At 11, Mancinelli decided to get a job to help out the family. “What can you do?” his father asked. “I’m going to deliver papers in the morning and afternoon, then go to the barber shop and learn the barber business,” his son replied. His father was his first customer.

For 40 years of his 97-year career, Mancinelli owned his own shop on Liberty Street in Newburgh. He also served in the U.S. Army during World War II.

He was married to his late wife, Carmella, for 69 years.

In 2017, Mancinelli said thoughts of retirement never entered his mind.

“You get old fast doing that, so I might just as well work,” he said, adding he told his son that when he dies he wants scissors and a comb placed in his coffin. “I might find a customer up there who needs a haircut!” he said.

He is survived by his son, Robert Mancinelli, four grandchildren and several great- and great-great grandchildren. He outlived a second son, Anthony Jr., along with a sister and six brothers. “Anthony wishes a long, healthy and happy life for all of his family and friends that he leaves behind,” his family said.

A funeral service was held Sept. 24 at St. Francis Church in Newburgh, followed by interment at Woodlawn Cemetery. Memorial donations may be made to Hospice of Orange and Sullivan Counties (hospiceoforange.com) or St. Jude Children’s Research Hospital (stjude.org).