At age 98, Anthony Mancinelli entered Guinness World Records as the world’s oldest barber. Now 106, his record stands; he works an eight-hour shift every Monday and Tuesday at Fantastic Cuts at the New Windsor Mall. Earlier this month I interviewed him while at the same time getting a much-needed trim. (He asked if I wanted a crew cut, which brought a quick “No!”)

Born in Italy on March 2, 1911, Mancinelli emigrated to the U.S. in 1919 at age 8 with his family after his father had established himself in Newburgh. Woodrow Wilson was the president; there have been 17 others since. 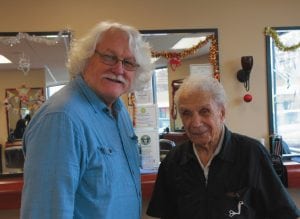 Life was not easy for the new Americans. “There were eight kids in the family and my father only earned $25 a week” at a local factory, Mancinelli recalls. “We ate a lot of bread, I can tell you that.”

At 11, Mancinelli decided to get a job to help out the family. “What can you do?” his father asked. “I’m going to deliver papers in the morning and afternoon, then go to the barber shop and learn the barber business,” his son replied.

“I used to get up at 4 a.m. to do the morning papers, and then I delivered the Newburgh News in the afternoon, after school,” he says. “My father got up later; nobody else was getting up that early.” After the afternoon papers, Mancinelli went to the barber shop until about 8 p.m. before returning home for dinner.

He became a barber at age 12; his father was his first customer. “He had a moustache and I used to curl the ends of it,” Mancinelli says. A haircut cost 15 cents and a shave was 10 cents. “We used hand clippers — nothing electric.”

Early in his career, Mancinelli did more than hair and beards. Customers with high blood pressure came to him for treatment. “They’d say: ‘Can you take some blood from me?’ ” he says, noting that the drugstore across the street sold leeches, which he bought for 2 cents each to apply to the customer’s skin to draw blood. 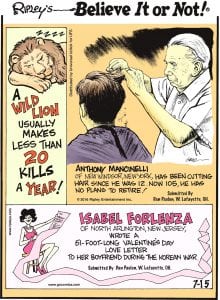 Mancinelli was featured in a 2016 Ripley’s cartoon.*

For customers who complained of chest pains, he employed “cupping,” which involved placing glass cups on their chest to “draw the pain out,” he says. “I was the only barber doing that. I don’t know if it was legal or not, but nobody stopped me.” (The technique wasn’t his invention. Egyptians used the method as early as 1550 B.C.)

With all that work, what did he do for fun? “I didn’t play ball or anything else,” he says. “I just stayed in the barber business; I’ve worked all my life.”

Mancinelli is well-known beyond New Windsor. Besides his recognition by Guinness, which came in 2010 when he was employed at Antonio and Pasquale Barber Shop in Vails Gate (since closed), the mirror in front of his barber’s chair displays a 2016 entry from the newspaper strip Ripley’s Believe It or Not! and congratulatory letters from President Barack Obama and New York Gov. Andrew Cuomo. For 40 of his 95 years as a practicing barber, he owned his own shop on Liberty Street in Newburgh.

Mancinelli served in the U.S. Army during World War II, “but because I had a wife and kids, I wasn’t sent overseas,” he says ruefully. “I lost my job; I was supposed to the [military] company barber.”

He isn’t impressed with today’s trendy cuts. “They want this and that,” he says. He prefers the styles of yesteryear, which may be one reason he cuts his own hair, and that of his son Robert, 81.

He has never considered retiring. “You get old fast doing that, so I might just as well work,” he says. “So far, thank God, I have no problems.”

He admits his response might be different if his wife of 69 years were still alive. “We’d go places,” he says. The two traveled together to Europe, Hawaii, South America and the Panama Canal.

The oldest recorded yoga teacher is Ida Herbert, who was still teaching at the Orillia YMCA in Ontario, Canada, at age 95.

The oldest full-time secretary is Verna Theus Davis Willmon, 97, who worked at the First Assembly of God in Victoria, Texas, until 2007.

The oldest professional artist is Moses Aleksandrovich Feigin, 102, who had an exhibt at the Central House of the Artist in Moscow, Russia, in 2007.

Dr. Leila Denmark of Portal, Georgia, was the oldest practicing physician when she retired at age 103.

The oldest judge was Albert Alexander of Plattsburg, Missouri, who retired in 1965 at age 105.

Mancinelli attributes his long life in part to the fact that he doesn’t drink or smoke. He does enjoy cooking. “Chicken and steak but mostly pasta, making the sauce and meatballs,” he says.

He’s not the first in his family to live a long life. His grandfather Anthony died at age 103. “He was up on a ladder picking olives on his farm in Italy when he fell,” he says. The grandson remembers picking olives, threshing wheat and stomping grapes as a very young boy. “I was almost up to my waist in grapes,” he recalls. “We didn’t get paid but it was all the grapes you could eat.”

Mancinelli turns 107 in March. “I’ll just keep going until I peter out,” he said. He has told his son that when he dies he wants scissors and a comb placed in his coffin. “I might find a customer up there who needs a haircut!”

* Cartoon courtesy Ripley’s Believe It or Not © 2016 Ripley Entertainment, Inc. Reprinted by permission of Andrews McMeel Syndication for UFS. All rights reserved.