Artist discovers the joy of kelp 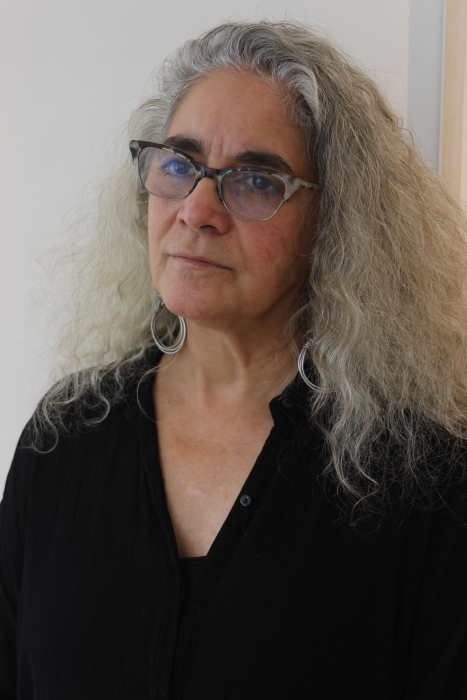 Ada Pilar Cruz is a sculptor, printmaker and installation artist with a studio in Lake Peekskill. Her most recent residencies took her to Iceland and Maine, where she made sculptures and prints using kelp and seaweed.

Some of that work will be exhibited in a solo show, Low Tide, that opens on Friday, Oct. 4, at the Buster Levi Gallery in Cold Spring.

What led you to begin working with kelp?
My residency in Skagaströnd, Iceland, was for two months, and I ran out of clay, which is what I usually use for sculpture. I found myself drawn to these huge bundles of kelp, a superfood. I started grinding it up, mixing it with pulp, looking to preserve the amazingness of it.

There was a fjord outside the studio, and there was a shore where the kelp washed in. I dried it and rolled it and made paper, made a Viking helmet. It dries with a translucent look, but it is ephemeral. It rots if there’s no oxygen, but if there’s air flowing around it retains the salty sweet smell of the sea.

What was Skagaströnd like?
It is on the north coast and had been a fishing village, but all the herring left. I worked in what had been a giant freezer with 11 other artists, no walls, no privacy. I felt tireless; I was in the studio early, left late. People would come, photograph, ask questions. 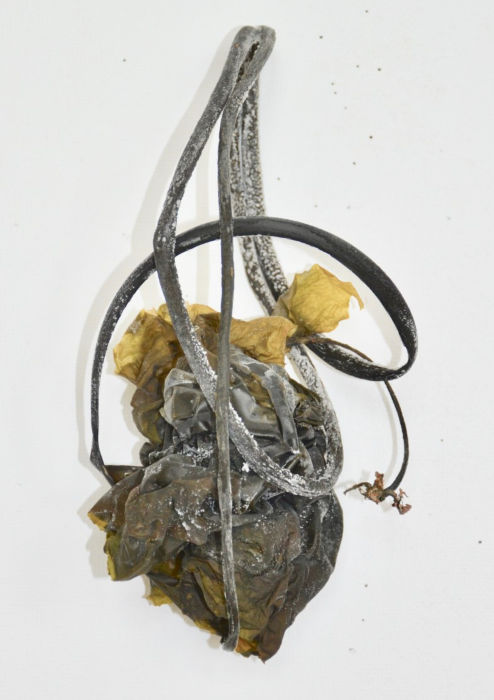 How did you move the huge pieces of kelp?
I had to keep folding it. I had vats in my car and put them in carefully. I wanted to collect the long pieces and keep them in perfect condition, but it’s hard because they tear like ribbons. I also collected decomposing kelp that was full of holes. If you catch what’s called the “hold,” which is shaped like a bowl, it can hold 20 pounds or more. But when it dries, it gets brittle. When you put it back in the water, it rehydrates. It became like a science project.

You also collected seaweed in Maine.
One piece was 17 feet long. I laid it on a long table to wash it, then hung it from the ceiling. I rolled one piece like a scroll, but it started to rot. I made weaved strips. As it dried, it started to shrink by about 70 percent, because it’s mostly water. It looks like skin.

How did you end up in Maine?
After my experience in Iceland, I started researching kelp in the U.S. and found there are kelp farms in Maine. Lo and behold, I found an artist-in-residence program at StudioWorks in Eastport. The studio was solitary. I had a whole building made from what had been storefronts. One had a printing studio, with tables and an etching press, and I had an app which told me when low tide was. Going out was spooky; everything is covered with bladder-rock seaweed that you’re stepping on. You feel like you’re on another planet. 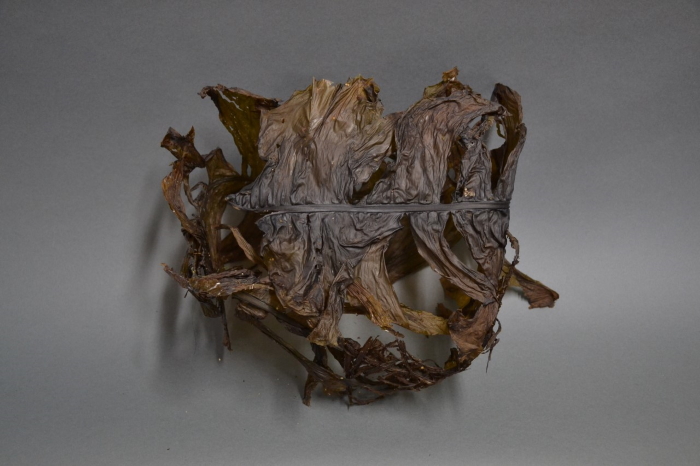 When wet, the kelp prints blur, so they look like the kelp just beneath the water. As the kelp dried, it would become solid, and I’d peel it off and print it on a piece of paper and the pattern would look like an island or a satellite image. The second floor of the building had a bookbinding studio. At night, I cut board and canvas and bound portfolios. I made nine huge prints.

We held a talk. I didn’t think people would come because people there harvest the kelp, so why would they be interested? One teacher told me her son had started a kelp farm. She said, “This is fabulous, I never thought of using kelp like this. I could bring it to my high school kids as a project.” I had 100 embroidery hoops on a wall, filled with kelp. 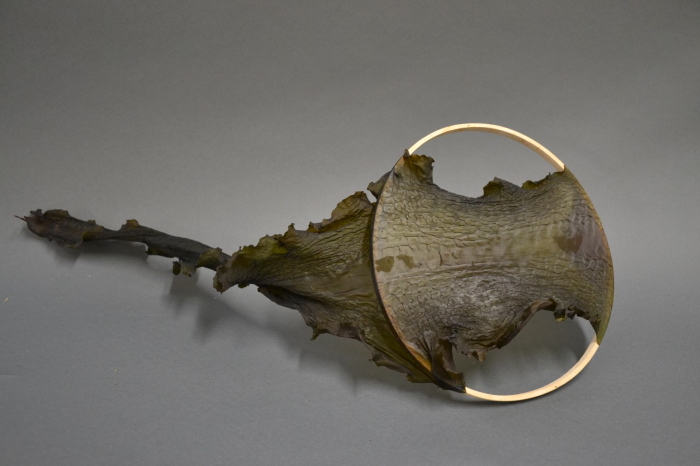 I wound up returning to Iceland for a month this past June. It was like fitting  into your favorite pair of shoes. I never left the studio. It’s not important that viewers of the work know this [background], but my experience with the material was deep.

The Buster Levi Gallery, at 121 Main St., is open Friday through Sunday from noon to 6 p.m., or by appointment. Low Tide continues through Oct. 27.

One thought on “Into the Weeds”