For my own sanity, I spend my time online in the quietest corners of the internet, such as groups in which people share photos of fat, happy bears gorging on salmon or discuss the weather patterns over mountains.

It’s calm, everyone is respectful, and there’s not a lot of controversy unless you’re defending salmon. But every paradise has its snakes. And this one came in the form of a ladder, or a series of metal rungs drilled into a rock face that make it easier and safer for climbers.

They are common on some trails, but not in the Catskills. One day this past August, hikers ascending the 3,640-foot peak of Twin Mountain there via Devil’s Path were surprised to find a ladder installed by the state Department of Environmental Conservation. 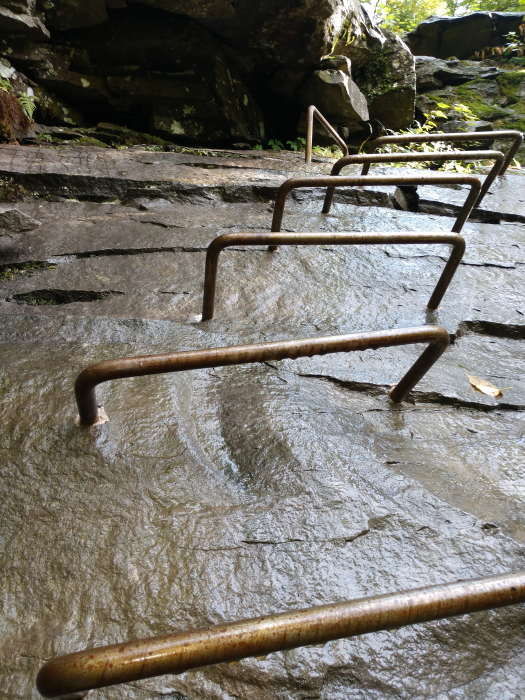 They snapped a photo and put it online. Anyone who has ever posted a Facebook comment about development in Beacon can guess what happened next.

Some hikers favored the ladder; others called it a desecration of the mountain and an insult to those who hike it. Shortly after, someone climbed Twin with cordless power tools and removed most of the rungs. The DEC, citing the vandalism, promptly closed that section of the path for “repairs.” (On Nov. 7 the agency announced it had reopened the path but rerouted it to avoid the need for a ladder.)

I was conflicted by all of this. As someone raised Catholic, my first reaction was: This is my fault, isn’t it?

The regular readers of this column, by which I mean my mom, will recall that in July I wrote about bruising a rib coming down a rock face on Twin Mountain. This was the same rock face where the ladder was installed shortly thereafter.

I contacted the DEC to make sure the rungs were not known inside the agency as Brian’s Ladder. They are not, I was assured, although I learned that the rock face I found so difficult wasn’t always so. For years, hikers had been using an exposed tree root to pull themselves up and lower themselves down. But this past spring, the root disappeared. So the ladder was installed to avoid injuries and potential lawsuits by injured hikers who could claim the agency knew the section was dangerous but did nothing.

Certainly as someone who was injured on that rock face, I support adding a ladder, right? Nope. When I slammed into the rock in June, my reaction was not, “They need a ladder here,” but, “Boy, I need to get better at this.” Scrambling and bouldering are not well-developed skills in my tool kit, which that hill made painfully clear.

People don’t climb mountains because it’s easy. The rootless rock face was climbable, especially since a climber of limited skill managed to do it (I fell coming down). Plus, you’re climbing a trail called the Devil’s Path — what do you expect? A ski pull? I’m not a masochist but nothing sharpens the mind like failure.

I’m thankful I was able to struggle on the Devil’s Path before the rungs and the reroute. But it’s hard not to feel disappointed for those who won’t know what they’re missing.

One thought on “Out There: How Safe is Too Safe?”