If the Cold Spring Area Chamber of Commerce has its way, passengers will be hopping aboard the familiar green trolley in larger numbers in 2020.

A committee created by the chamber to study how to increase use of the trolley in Philipstown recently sent its recommendations to Vinny Tamagna, the director of transportation for Putnam County, which operates the vehicles. He said he planned to incorporate most of its suggestions.

The trolley began operations in 2007, following weekend routes in Philipstown, Cold Spring, Garrison and, in recent years, Beacon. The service runs from Memorial Day through mid-November.

“The trolley is not only a vehicle; it is becoming a destination,” Tamagna said. “It is not a bus or a van; it is ‘the trolley,’ and people want to ride in it.”

The trolley carried 1,883 passengers in the 2019 season, Tamagna said, a number he described as “phenomenal,” noting it was a 58 percent increase over 2017 and a 19 percent increase over 2018. However, in its first year of operation, the trolley carried 8,300 passengers, and ridership decreased each year before hitting a low of 792 in 2017. That nearly doubled in 2018, but it was still the trolley’s second-worst year.

The vehicle got a boost from two travel articles over the summer in The New York Times that mentioned it, but Tamagna said much of the increase could be attributed to promotion by the chamber and the addition of Magazzino Italian Art, a museum on Route 9 in Philipstown, as a stop. The trolley also stops at the train stations in Garrison, Cold Spring and Beacon.

A trolley logo designed for the chamber

The chamber said its optimism stems from the results of a survey it conducted to determine interest in using the trolley, which has been viewed primarily as serving visitors.

Chamber president Eliza Starbuck said the 300 people who responded said they would use the trolley more often if they knew its schedule and routes, and if they believed it was reliable. According to the survey, “there is a part of the community, seniors and families in particular, who would use it,” she said. 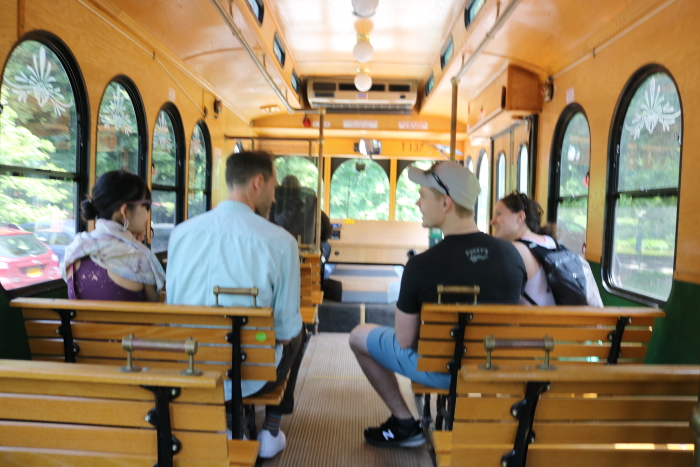 The view from inside the Cold Spring trolley (File photo by M. Turton)

When the chamber presented its recommendations to the Cold Spring Village Board earlier this year, trustees questioned the change to a two-hour route as well as the route continuing to include stops in Beacon.

Starbuck said that with only one trolley in service at a time, the two-hour route is more desirable. Under federal transportation regulations, an identical vehicle is kept on standby in Carmel but used only if the first trolley breaks down.

She said the chamber recommended keeping Beacon on the route “because we looked at the flow of people from there to Cold Spring.”

The trolley committee did heed the Cold Spring board’s advice to eliminate stops at Lunn Terrace and Village Hall because they disrupt Main Street traffic.

In Nelsonville, the chamber recommended adding stops at Village Hall and Homestyle Bakery. Members of the Village Board said the stops are warranted because of the large number of hikers who could use the service.