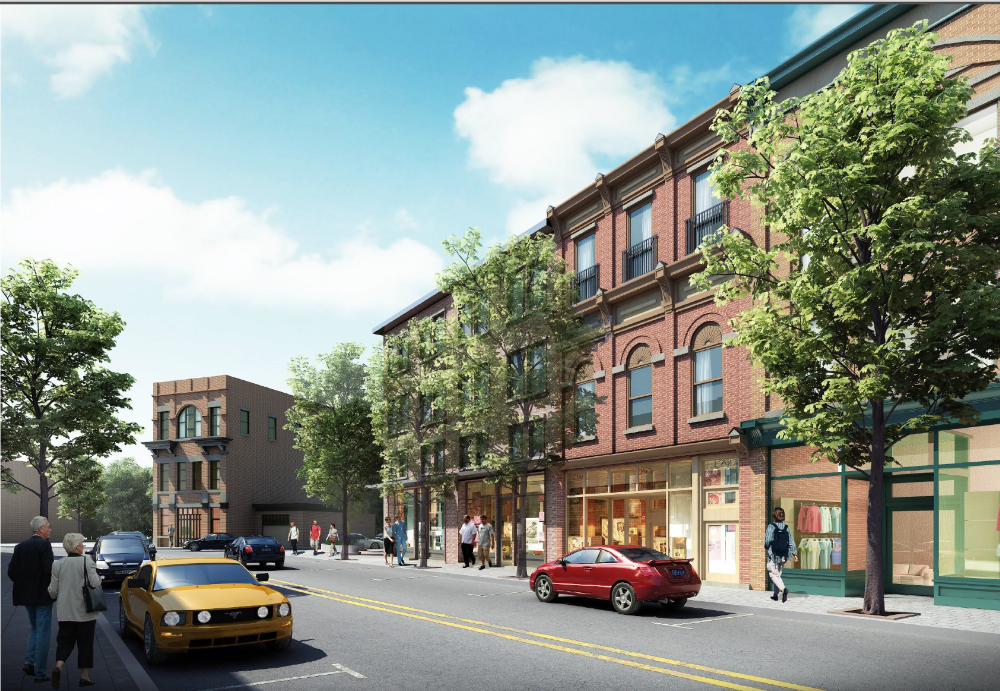 A rendering presented to the Beacon City Council shows how Main Street might look if the four-story project were approved. The Hudson Beach Glass building is at left.

Beacon council must decide on trade-offs

A Beacon developer wants to bring affordable housing, office space and a public park to Main Street — attractive amenities for any city — but says he needs four floors to do so.

The project, called 2 Cross St., was introduced earlier this year to the City Council and in November to the Planning Board by developer Joe Donovan. The City Council must approve a special-use permit for any four-story building to be built on Main.

The proposal calls for integrating the building at 172 Main St. that’s occupied by Riverwinds Gallery and the brick building at 4 Cross St. with new construction and an undeveloped lot that sits between the buildings. On Main Street, Donovan wants to construct a four-story building with retail on the ground floor, nine units of affordable senior housing on the second and around 10,000 square feet of office space on the top two floors. The back side of the complex, on Cross Street, would be three floors.

A portion of the undeveloped lot, which has been used in recent years by the Green Teen gardening program, would remain as a park. Donovan said he would help relocate Riverwinds, the Green Teens and tenants living at 4 Cross St.

Two years ago, he said, the project could have been easily accomplished. But when the City Council revised the Central Main Street zoning district last year, it moved the Cross Street parcel (which does not face Main) into the PB (Business Off-Street Parking) zone, which does not allow office or multi-family uses. The revision also added the requirement that the City Council approve any new four-story buildings in the Central Main Street zone. 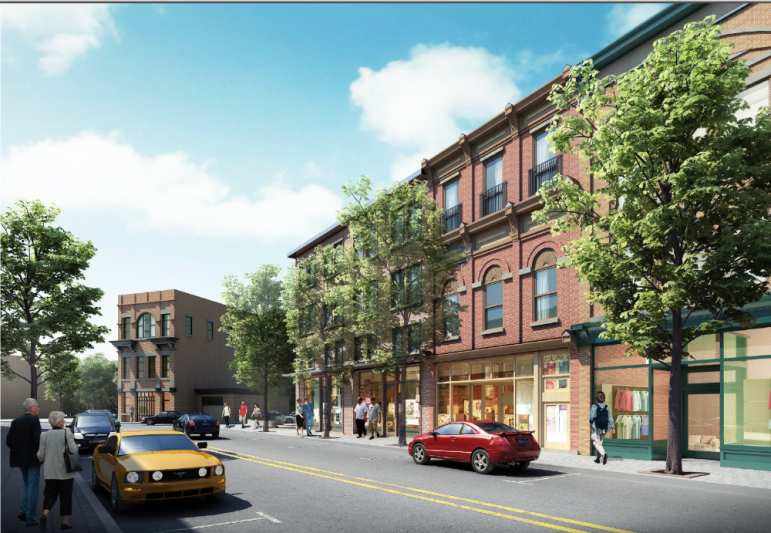 A rendering presented to the Beacon City Council shows how Main Street might look if the four-story project were approved. The Hudson Beach Glass building is at left.

Even with a permit from the council, a fourth floor under the new zoning must be “set back” at least 15 feet so it’s smaller than the three floors below it.

Beacon’s historic district, which regulates design standards, adds yet another layer of complexity. 172 Main is in the historic district; 4 Cross is on a list of parcels that could soon be added.

On Monday night, Donovan asked the council for three concessions: to bring his Cross Street parcel under Central Main Street zoning; to approve a parking plan that would put some off-site parking in nearby residential neighborhoods but add eight more spaces than required; and to allow him to construct a four-story building without a setback.

If approved, he said, his building would still be 7 feet shorter than the neighboring three-story Hudson Beach Glass building, which is also in the historic district (and is listed on the National Register of Historic Places).

But after four-story buildings were constructed at 226, 249 and 344 Main — none of which would have been approved under the revised zoning — Donovan acknowledged his plan might be a tough sell.

Donovan’s proposal comes just after the council began its own discussion on whether four-story buildings should be allowed in return for “trade-offs” from developers that benefit the public. A public hearing is scheduled for Jan. 21 on a law that would make trade-offs mandatory for four stories.

Although serious negotiations on 2 Cross St. won’t begin until next month, after Lee Kyriacou replaces Randy Casale as mayor and newcomers Dan Aymar-Blair and Air Rhodes join the council, preliminary feedback this week was mixed. On Monday, the City Council seemed amenable to Donovan’s first two requests but balked at the request for four floors.

“We all just ran for election and overwhelmingly the people I spoke to told me they did not want four stories on Main Street,” said Council Member Jodi McCredo. “If I now approve a building with four stories on Main, I am not representing my constituents the way that I promised I would.”

Council Member Terry Nelson said he agreed with McCredo, but both indicated they would consider a fourth floor with a setback in exchange for trade-offs.

If the council won’t grant a fourth floor without a setback, Donovan said he could build a three-story building without the public benefits, or not build at all.

On Tuesday, however, members of the Planning Board seemed more willing to entertain a four-story building along that stretch of Main.

“If the historic building adjacent to the proposed development is not stepped back, as long as the new development maintains that height, I don’t know why we would expect a setback,” said Board Member David Burke.

The decision will likely fall to the City Council, which on Monday, Dec. 16, is expected to name itself the lead agency to review the project’s environmental impacts, a job typically handled by the Planning Board.

The Planning Board could challenge the request but Chair John Gunn said Tuesday that it’s not likely to.

5 thoughts on “Three-Story Limit on Main?”