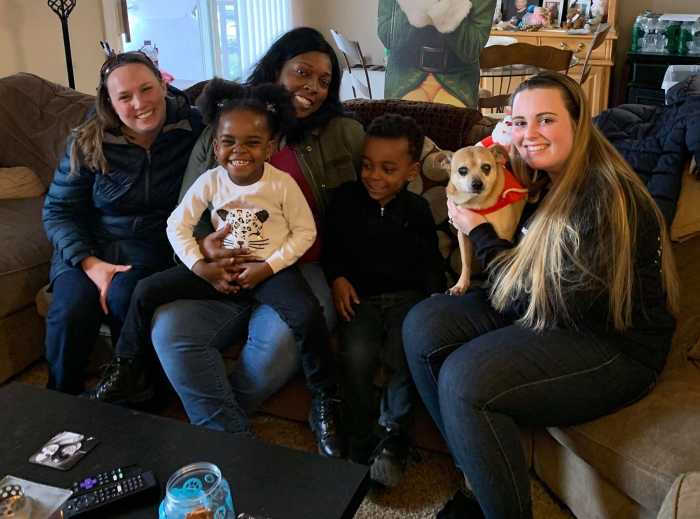 Santa Claus came early to Beacon this year — and he did it 61 times.

That’s the number of families who benefited from a Facebook group called Beacon Santas created last month by Stephanie Dignan, a city resident.

Dignan said she realized that she had the means to buy presents this year for people beyond her family and friends but wasn’t sure how to find those in need. So she created a Facebook group. The idea was to identify families, learn what they needed for the holidays, and distribute requests to group members. She invited people she knew to join and made posts elsewhere on Facebook where she had seen people ask for help.

Within 15 minutes, she had a “match” between a Beacon Santa and a family, she said.

“I was pleasantly surprised by the warmth with which people received the idea,” she said. “But I’m never surprised by people’s willingness around here to come together for good.”

Word quickly spread online among teachers and social workers, and soon Dignan was receiving referrals from shelters and schools. There were homeless families, families dealing with the loss of a job or car, families with medical emergencies, single parents, widows, or any combination of circumstances. The requests were all the same: Parents wanted to give their children a memorable Christmas at the end of a tough year.

One of the people Dignan invited to the group as a Santa was Madison Lee, who said her fiance had shared stories of his own tough holidays while growing up in Beacon when his large family was dependent on the generosity of churches and neighbors. “His parents weren’t always able to provide a nice Christmas,” she said, so he’d been hoping to help a young family in the same way that so many Beaconites helped his own.

Searching through the stories in the group, the couple found a request from a widowed mother with twins. A fellow Beacon Santa, Becky Fraioli, and her husband pitched in. The three families got together to share gifts and eat cookies with the children.

Similar meetings played out 60 times over the past two weeks, Dignan said, with Santas pitching in with clothes, toys, gift cards, electronics, and a holiday tree or two.

With Christmas less than a week away, the project has finished for the year, Dignan said, but she is already planning for 2020. Santas can join the Facebook group and those in need or who work at shelters, schools and churches can email Dignan at [email protected]

“If we were able to help 60 families with no planning, no infrastructure, no notice, no anything, then next year we could easily help 100,” she said. “Who knows what we could do with a little knowledge and experience?”