As a kid in Ontario, I was a bicycle-riding paperboy. Sixty years later I’m still at it, distributing 4,000 copies of The Highlands Current each Friday morning in Beacon, Cold Spring and Philipstown, rain or shine, although thankfully by car.

Often on Fridays I’d see a weathered black car zooming around with copies of The New York Times flying out the window. My reaction was always, “Man, that guy drives like a maniac!”

Late last year that black car disappeared. Its driver, Decatur Myers, died on Dec. 13, at age 72, of cancer. Lory Smith, who lives in Cold Spring, emailed The Current to ask if we knew that Decatur had passed. “He was a unique individual and worked extremely hard to get us all our various papers,” he wrote. “I considered him a friend.”

I soon realized how many people had known Decatur — some by name, others simply as their longtime newspaper delivery man, many from his infamous driving.

Although we never met, I felt a kinship, knowing that we must have shared the same grievances about heavy editions (today’s 24-page paper is 16,000 pages heavier than a 20-pager) and bad weather. Wanting to know more about him, I called his son, Decatur Jr., who agreed to meet at his Peekskill home. Joining us were Decatur Jr.’s wife, Joanne, and, by phone, Decatur Sr.’s sister, Virginia, in Michigan, and his daughter, Sakura, in Yonkers.

It was a raucous conversation, with all five of us sometimes talking at once.

Born in West Virginia, Decatur spent much of his life in Yonkers, working in maintenance. Around 1991 he moved to Peekskill. Soon after, he “retired” to take up newspaper delivery, which continued nearly every day for the next 28 years.

Besides The Times, he delivered The Wall Street Journal, The Korea Times, The Journal News, the New York Post, the New York Daily News, the Financial Times, Barron’s and The Observer.

His route took from midnight until 11 a.m. and included as many as 500 customers from Croton to Philipstown to Carmel.

When I sheepishly asked about Decatur’s driving, I was greeted by thunderous laughter.

“He was the world’s worst driver!” Joanne concurred. His son said his dad was known to fall asleep at the wheel. He confirmed the senior Decatur went through vehicles like Tiger Woods goes through golf balls. “He was especially hard on brakes and transmissions,” Decatur Jr. said. 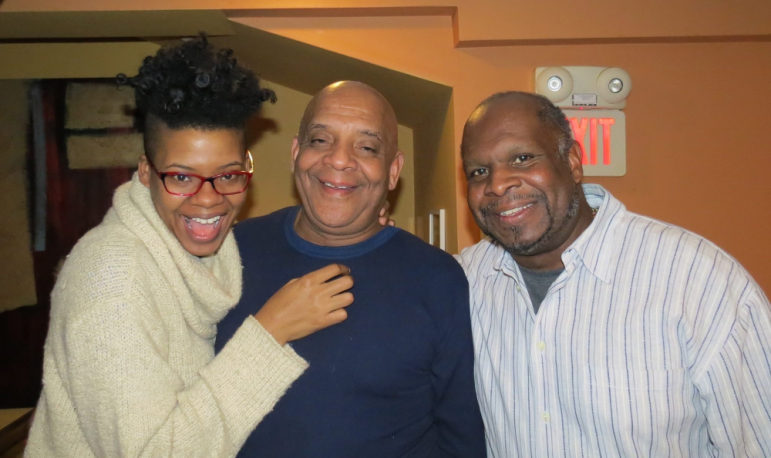 His father survived one serious accident, he said, suffering two broken ankles that required surgery and a painful recovery. He also had shoulder surgery and a small stroke.

But he loved the 11-hour route, and doctor’s orders couldn’t stop him. He’d even eat and sleep in his car. “His route was like a drug; he had to have it,” Decatur Jr. said.

Decatur was married three times, to Shirley, Cecelia and June. “If nothing else, he was a ladies’ man!” Joanne said with a laugh. His first two marriages ended in divorce but the three wives were known to get together on occasion.

He loved family and family outings. He enjoyed watching baseball, football and golf, especially Tiger Woods. In his younger days he followed the Brooklyn Dodgers and was heartbroken when they moved to Los Angeles.

Decatur was generous. “He put others ahead of himself,” his son said. “He’d give you his shirt even before he’d worn it.”

His sister Virginia said he always gave her a special Christmas present. This past year it was a bubblegum pink linen jacket and scarf. “He said ‘You gotta hook this up with some navy blue — it’ll knock that pink out!’ ”

He brought his last gift to her early. He was losing weight; something was wrong. In September, Decatur had been diagnosed with stage four pancreatic cancer.

He worked his route into November. He lived his last days with Virginia, on her Michigan property, one of his favorite places.

In one of their last conversations, Decatur suggested a “black-and-white party,” with live music and formal attire, to remember him. “I told him we’d do that,” Virginia said, but it never happened.

Decatur’s family plans to spread his ashes on Father’s Day, on a mountaintop in Philipstown, another favorite spot.

8 thoughts on “Reporter’s Notebook: From One Paperboy to Another”