■ Village reservoirs are at 100 percent capacity, Matt Kroog, the superintendent of water and wastewater, told the Cold Spring Village Board at its Feb. 11 meeting. Water levels had fallen in the fall because of drought conditions. Kroog said no water discoloration has been reported since extensive problems around Jan. 10. A flush of the system will be conducted in late March or early April, he said.

■ The Cold Spring Police Department answered 51 calls for service in January. There was one arrest, for violation of an order of protection. Officers wrote 50 traffic and 56 parking tickets. The Cold Spring Fire Co. responded to three alarms.

■ Mayor David Merandy reported that because all area fireworks companies are booked for the July Fourth holiday weekend, Cold Spring’s pyrotechnics will take place as part of Community Day over Labor Day weekend.

■ Village Accountant Michelle Ascolillo outlined the 2020-21 budget process and said the maximum allowable increase in the tax levy will be $41,000 under the state-imposed cap. The village must submit its budget to the state by May 1.

■ The highway department collected 43.4 tons of trash and 16.5 tons of recyclables in January. A price increase brought the cost of disposing of recyclables to $102.48 per ton, compared to $87 per ton for trash. The village is exploring the savings of switching from weekly, single-stream recycling to a dual-stream system in which cardboard and paper would be collected on alternate weeks from cans and bottles.

■ The Zoning Board of Appeals requested an advisory opinion from the Planning Board regarding an application to remove a barn at 21 Parsonage St. and replace it with a single-family home on the same spot. 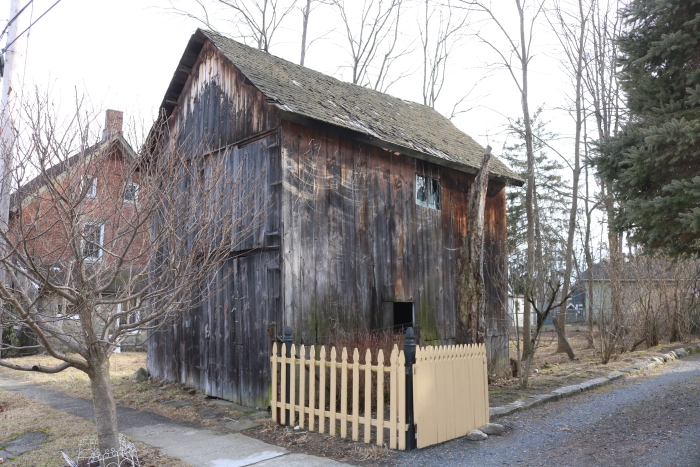 The owner of this barn on Parsonage Street would like to remove it and construct a single-family home. (Photo by M. Turton)

■ The board continued its discussion on Feb. 11 with the organizers of a Putnam Pride event tentatively scheduled for June 6. Numerous attempts by the trustees and Merandy to secure event details proved unsuccessful. An equal number of attempts by the principal organizer, Eileen McDermott of Brewster, to explain why such details are dependent upon first receiving formal board approval, were equally unproductive. The protracted discussion ended with McDermott agreeing to bring to the Feb. 25 meeting information such as the anticipated attendance, number of vendors, food trucks and nonprofit organizations, arrangements for music and speeches, and locations of activities.

■ John Sherer’s application for a Hops on the Hudson Artisan and Craft Fair at Dockside Park on the weekend of May 30-31 will be resubmitted to shift the event to Mayor’s Park. The size of the event, traffic, parking and policing were among the board’s concerns with having the event at Dockside.

■ The board on Jan. 28 rejected all bids received for the purchase of a boiler for the firehouse due to higher than expected cost. A second round of bids is being considered.

■ The mayor said he would contact the state Department of Transportation after resident Teresa Lagerman expressed concerns on Jan. 28 about pedestrian safety at the corner of Main Street and Chestnut Street/Morris Avenue, especially with students walking to and from Haldane.