With contract negotiations stalled in November 2018, CSEA members protested outside the historic courthouse in Carmel. The union accused the Odell administration of dragging out the process, "cancelling several negotiations sessions and arriving unprepared at others." (CSEA)

But two others remain in limbo after years of talks

The Putnam County Legislature is expected to vote March 5 on a new contract with the Civil Service Employees Association (CSEA), which represents 327 of its employees, but negotiations continue with two smaller unions.

The contract, if approved, would cap three years of negotiations with the union, which represents health, social services and highway employees.

County officials expressed optimism that agreements will soon be reached with sheriff’s deputies, jail guards and support staff, but those talks also have been going on for years, in part because, under state law, public employees face heavy fines if they strike.

The previous CSEA contract expired in 2016; the new contract would cover 2017 through 2022. The Legislature’s Personnel Committee unanimously approved the proposed six-year contract with the CSEA at its Feb. 11 meeting.

Janet Canaday, president of CSEA Unit 8150, said she was “very happy that the county and the CSEA have come to this agreement,” adding that “this has been a long time coming.”

In a statement, County Executive Maryellen Odell thanked the union’s negotiating team, including Canaday and Jane Meunier, president of Local 840. “We value all of our employees and are proud of the services they provide our residents on a daily basis,” she said.

County Attorney Jennifer Bumgarner said the county had anticipated raises for CSEA members, so the money is in the budget.

One of the sticking points during negotiations, said Personnel Director Paul Eldridge, was how to incorporate 911 dispatchers into the CSEA contract. The state Public Employment Relations Board (PERB) in 2016 approved moving the dispatchers to the CSEA from the Putnam County Sheriff’s Employee Association (PCSEA).

“A lot of the time was spent on incorporating a 24/7, 365-day operation into an agreement that didn’t have any other employees who operated like that,” Eldridge explained.

While the CSEA contract awaits approval by the Legislature, the county continues to negotiate with the PCSEA and the Putnam County Sheriff’s Police Benevolent Association (PBA), which represents law-enforcement officers and has 80 members. Like the CSEA deal, both expired at the end of 2016.

A proposed six-year contract with the PBA that included 2 percent annual raises, with the possibility of higher increases depending on inflation, was unanimously rejected in July 2017 by the Legislature as “fiscally unsustainable.” 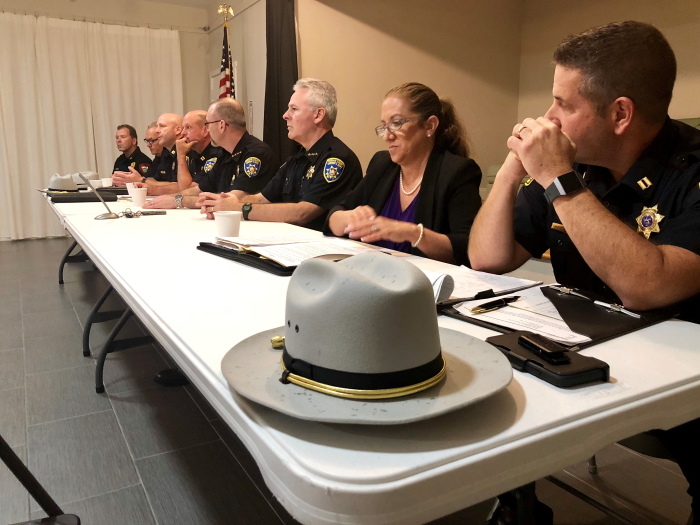 Putnam County Sheriff’s Department leaders at a town hall in 2018, along with Larry Burke of the Cold Spring police, at far left. (Lydia JA Langley/PCSD)

The proposal also would have increased holiday pay and eliminated a requirement that deputies train as first responders.

The rejection angered PBA leadership, which filed an “improper practice” charge with the Public Employment Relations Board against Odell, claiming that while she publicly supported the deal, her administration privately lobbied against it. (The PERB dismissed the accusation.) In a Facebook post that has since been removed, the PBA mocked Odell as “The Empress” and showed a doctored image of her riding a horse at Tilly Foster Farm.

The union also purchased a billboard on Route 9 in Philipstown criticizing members of the Legislature for giving themselves a 14 percent raise in December 2017 that brought their part-time salaries to $40,000 annually.

Andrew Quinn, the PBA’s attorney, did not respond to an email requesting comment. But he told the Putnam Examiner last year that if Odell had agreed to an “unsustainable” contract, “then she’s reckless,” and if she signed a contract that was sustainable but the Legislature said it wasn’t, “they’re liars. So it’s one or the other.”

The county and PBA entered mediation on Dec. 20, according to a Facebook post by Legislator William Gouldman (R-Putnam Valley). If mediation fails, the negotiators will have to resolve their disputes through binding arbitration, in which both sides would be compelled to accept a third party’s decision. Patricia Stone, Odell’s chief of staff, said the administration was “hopeful” for an agreement “in the very near future.”

Accusations following a vote also colored recent negotiations with the Putnam County Sheriff’s Employee Association, which has 71 members who work as jail guards and support staff.

After its contract expired in 2011, the union negotiated with the county for three years before reaching an agreement that covered 2012 through 2016. When union members voted it down, the county filed an “improper practice” charge with the Public Employment Relations Board, accusing PCSEA leaders of negotiating an agreement, then urging members to reject it.

The state panel upheld the charge and, as a result, the contract went into effect without a union vote.

The negotiations on a contract for 2017 through 2023 are at a stage where the county just sent the union’s attorney a draft memorandum of agreement, Eldridge said. The agreement will “hopefully” be finalized soon after the Legislature approves the CSEA contract, he said.