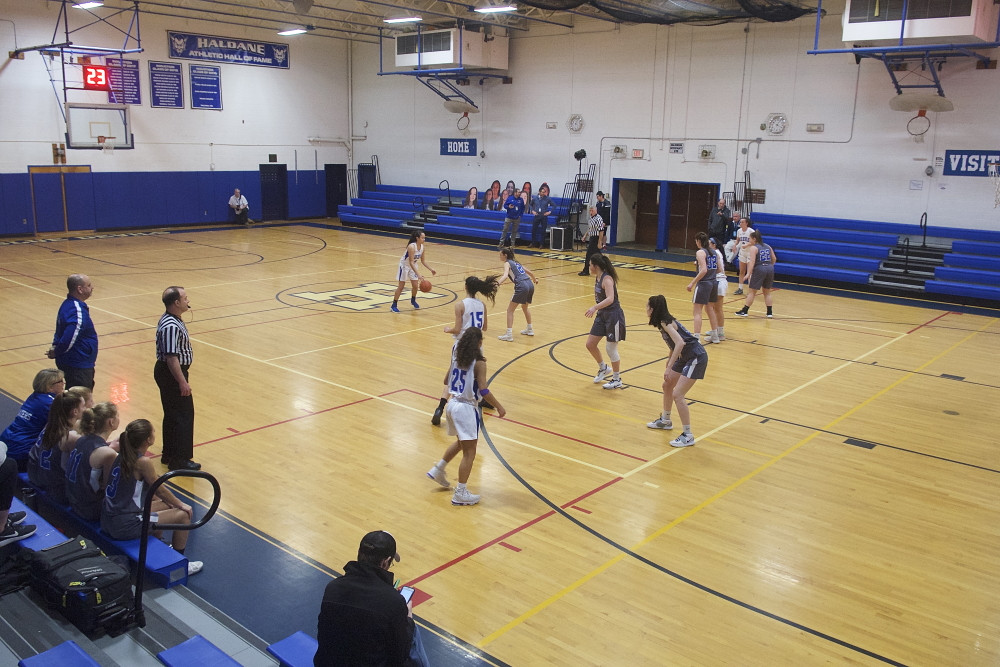 No spectators were allowed into the gym to watch the game on March 11, although a few oversized photos of senior athletes were placed in the home section. (Photo by S. Pearlman)

Haldane falls in regional game in gym emptied of fans

The Haldane High School girls’ basketball team had a home game on Wednesday (March 11), but it came about in a circuitous way.

The Blue Devils, who on March 7 won their seventh consecutive Section 1, Class C title by defeating Tuckahoe, were scheduled to play Section 9 champ Millbrook on Tuesday at a neutral site, Horace Greeley High School in Chappaqua. But the high school backed out as host because of concerns about the coronavirus, so the game was moved to Mount Saint Mary College in Newburgh. 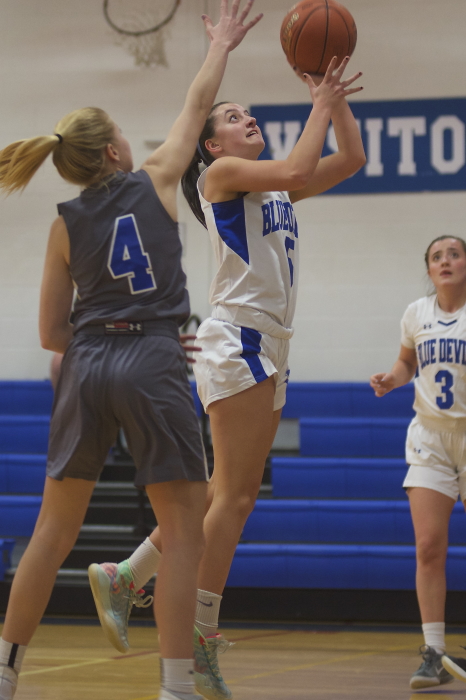 Liv Monteleone, driving against Millbrook, scored 19 points and her sister, Bela (3), had 15. (Photo by S. Pearlman)

College officials then backed out of hosting, too, citing concerns about the virus, so state high school athletic officials moved the game a third time, to Haldane. However, they stipulated that no spectators would be allowed to attend.

Millbrook prevailed, 60-46, to advance in the tournament before empty bleachers, although the game was broadcast online, and a small group of fans gathered in a room at the high school to watch it together.

“Section 1 and Section 9 jointly decided to have the game played without spectators,” Haldane’s athletic director, Chris Salumn, said before the game. “Obviously a lot went into that decision. The girls are playing, they’re getting to compete, and have a chance to advance. It’s unfortunate that we’re in this situation, but we wanted to make sure the girls had an opportunity to play.”

Haldane (12-11) started slow against Millbrook and fell behind by 18 points midway through the second quarter. The Blue Devils regrouped at halftime and closed the deficit to five points with 3:43 remaining in the game after Liv Monteleone drained a three-pointer, and then scored off a turnover.

But within a minute, the Blazers (20-3), led by Marist-bound Erin Fox, pushed the lead back to nine.

“After halftime we played more of a man-to-man defensive press,” said Coach Jessica Perrone. “We knew it would come down to turnovers, and pressing their guards.” 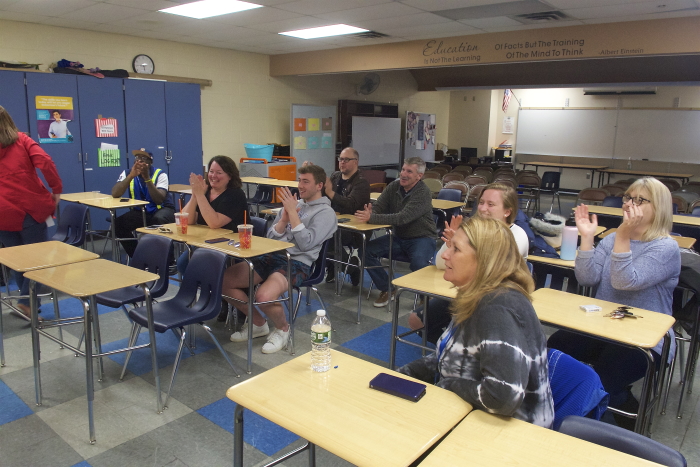 Parents and fans were invited to watch a livestream of the game at the high school. (Photo by S. Pearlman)

Perrone said not having spectators was unusual but “once the game started, you don’t even realize. You’re involved in the game, and the girls brought a lot of energy. We’re grateful we got to play.”

Against Tuckahoe on March 7, the only surprise for Haldane was that the Blue Devils were seeded No. 2 behind No. 1 Tuckahoe, which the New York State Sportswriters Association on March 10 ranked among the top 25 Class C teams in the state. The Blue Devils dismantled the Tigers, 49-22, to claim their seventh consecutive sectional title.

“I wanted to win a gold ball, my senior year especially,” said Bela Monteleone. “I was nervous and didn’t play well until the second half. But as soon as you start hitting shots, my confidence came back, and I knew we had it.” 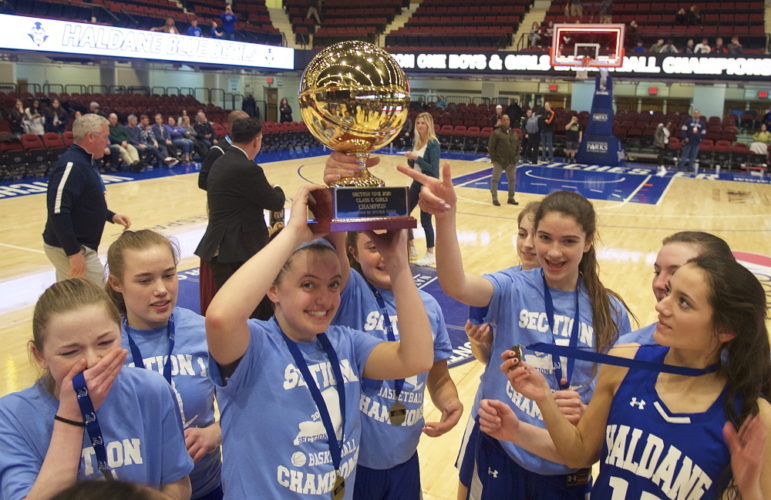 The Blue Devils with their Section 1 trophy (Photo by S. Pearlman)

The Blue Devils had a rough start to the season. Their longtime coach, Tyrone Searight, was dismissed in December after pleading guilty in a case involving workers’ compensation fraud, and two senior starters quit early in the season.

“We’ve been working all year for this,” Twoguns said of the sectional title. “We had a rough patch near the beginning, but that brought us together.”

“I’m just so proud of the girls,” said Perrone, who was promoted from coaching the junior varsity team after Searight’s departure. “The way they handled the season, progressing every day and becoming a different team. They had great chemistry and that made the job easier.”