Putnam County has had its first COVID-related deaths, according to data released Wednesday (April 1) by the county, citing the Putnam Hospital Center in Carmel. It is not clear how many county residents have died. The county referred questions about the deaths to the hospital, which said that seven patients had died there of COVID-19, including two on March 31, but declined to provide further details beyond saying that not all seven fatalities were Putnam County residents.

The deaths were first reported on a Community Impact Dashboard that the county updates with the latest numbers related to the pandemic. As of April 1, a section was added with figures provided by the hospital. The chart says the seven deaths were “since March 6,” but the representative said that was when the hospital began collecting data, not the date of the first death. She declined to say when the first COVID-19 death had occurred.

(On April 3, the county updated the count to 11 deaths, including four in the previous 24 hours, and noted the data was “as of March 28.”)

Besides the deaths, the hospital said on April 4 that it has 18 patients confirmed to have COVID and another eight awaiting test results. Putnam Hospital Center has 164 beds, including 10 in its intensive-care unit, although that number should grow as Gov. Andrew Cuomo has ordered hospitals across the state to increase capacity by 50 percent.

In a statement issued with the dashboard that first revealed the deaths, Putnam County Executive MaryEllen Odell said it would provide “complete local data about the epidemic,” adding, “now that Putnam Hospital is sharing its information with the county, we will also be able to include hospital admissions and more. We want the public to have as complete a picture as possible of the local impact of the coronavirus epidemic.” 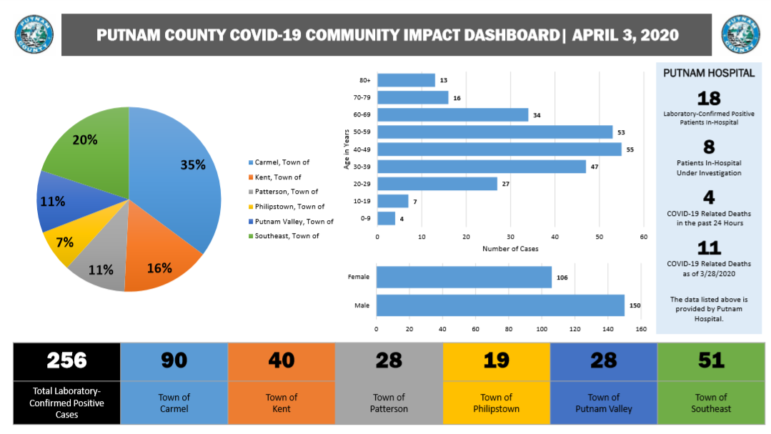 A dashboard released by Putnam County on April 3.

Dutchess County reported seven deaths in the past week related to COVID-19, raising its total to nine. A 61-year-old man died on Sunday (March 29) at Vassar Brothers Medical Center in Poughkeepsie “after being admitted for an unrelated condition and swabbed for COVID-19, which was confirmed positive,” the health department said. A second man, 52, died Tuesday (March 31) at Vassar Brothers after being admitted with shortness of breath, and on Wednesday (April 1), a 68-year-old woman with underlying health issues died at her home. On April 2, the county confirmed four fatalities, including a 28 year-old male.