Last week, as anxiety increased exponentially, along with the spread of the virus whose name shall not be spoken, I came home to find my porch occupied by an old friend I hadn’t laid eyes on in nearly 50 years.

It was a book, the latest in my small collection that are important to me, some from long ago. I forgot I had ordered it and its arrival made me smile.

That evening, it also made me laugh. My boss, Joyce Simmons, gave me The I Hate to Cook Book for my 22nd birthday. I was the first male travel counselor hired by the Ontario Ministry of Tourism — working in an all-female office, with women mostly in their late 20s. They had a field day with me. I had just moved to Toronto from Oldcastle, a place that makes Garrison look like a metropolis.

Shortly after I was hired, my co-workers conspired to call me while I manned the tourism information line, which was part of my training. A sweet voice asked me about a nudist camp close to my hometown. I was doubly mortified. She was asking me about nudity! And I had never heard of the camp! It was fictitious. They got me.

In truth, “the girls” treated me well, more like a younger brother than the inexperienced country boy I was. I was touched by Joyce’s gift, meant to help me through the culinary challenges of bachelorhood. Seeing that book again brought a flood of memories of colleagues who became friends — Ruth, Vickie, Carol, Aetna and Dale, among others. 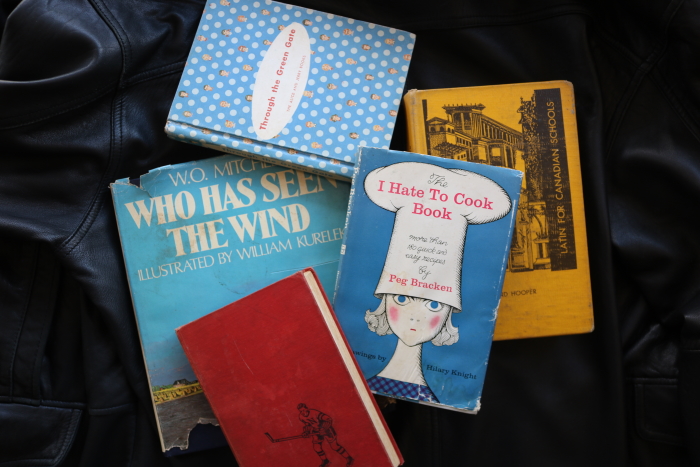 Books can bring back memories (Photo by M. Turton)

My current book collection began several years ago, motivated by the vivid memory of Grade 3 and riding my bike to the bookmobile, where I chose Through the Green Gate. It was the first time I had chosen a book on my own.

Several decades later, I was almost as excited to find it again online, used, and ready to be shipped.

When it arrived, the book’s pleasant rural setting was only vaguely familiar. It was the artwork I remembered clearly — beautiful watercolors, featuring adults and kids all dressed way too well. It was a great start to my fledgling collection.

Allow me to introduce a few other old friends.

Scrubs on Skates chronicles a high school hockey player. I wasn’t in high school yet when I first read it, but hockey was my passion. The author, Scott Young, was a sports reporter for the The Globe & Mail in Toronto who also did color commentary on Hockey Night in Canada, credentials that kept my eyes glued to every page. Somehow, my fondness for the book increased when his son Neil went on to become a music legend.

During the summer before Grade 9, I was surprised to receive a long list of required reading for English class. My eyes skimmed over Shakespeare and Steinbeck and fell upon a book titled, The Eagle of the Ninth. I actually shouted, “Yes! A baseball story!” What a letdown to learn it was about the disappearance of the Imperial Roman army’s ninth legion around 120 AD. However, the book’s portrayal of one of history’s great mysteries seized my imagination.

There’s only one textbook in my little library: Latin for Canadian Schools, and it does not hold pleasant memories. I reacquired it as a backhanded tribute to Father McGinn, whose teaching method included a heavy hunk of oak named Handy Andy. Each time a student made a mistake, he wrote his name on the blackboard. At the end of class, everyone whose name appeared on the board lined up, bent over and endured a painful, Barry Bonds-style hit on the ass.

For each hit, we drew a sketch of Handy Andy in our textbook — the way military pilots might record their kills. At year’s end I had earned 17 Handy Andys, and I was far from the worst. I still twitch when I leaf through that book.

Who Has Seen the Wind, by W.O. Mitchell, is much more pleasant to revisit. I usually give an author a page to get my attention, but this book, introduced simply as “the story of a boy and the wind,” had me at the first sentence: “Here was the least common denominator of nature, the skeleton requirements simply, of land and sky — Saskatchewan prairie.” I’ve never been to the Saskatchewan prairie. But I feel like I have.

One treasure remains elusive. It was written in the 1930s or 1940s. I’ve searched for The Pitcher, which is about baseball, not the Roman army, numerous times. I read it as a young teenager, quite proud of myself because it was the thickest book I had ever conquered. The hunt continues.

We can all use some relaxation these days. Why not reacquaint yourself with some old friends you once found between two covers?

3 thoughts on “Reporter’s Notebook: Time to Lean on Old Friends”