In 2017 Jonathan Harrington, a linguistics researcher, thought to follow a cohort of scientists sent to Antarctica for four months to see how extreme isolation might affect their speech patterns. The changes were surprisingly rapid — not large, but measurable.

I’m not suggesting that we’ll be speaking in tongues soon, but it may be there are correlations in our situation to other endeavors, including strategic recipe development under duress. As we approach the six-week mark, this experience is casting long shadows.

Excess and flamboyance aren’t common markers of isolation. Instead, we slow down, scale back and become more efficient, although ideally not at the expense of our sanity, humanity or good humor. Cooking assumes a different urgency and meaning when we’re shopping less and with diminished prospects. Fortunately, despite initial hoarding and shopping excess, we have been spared any real shortages, and most of us are getting by and increasingly comfortable with the most common pantry staples and whatever produce is available.

Rather than running out for that must-have ingredient for a “perfect” recipe, we cultivate comfort with a once-weekly expedition and a little creativity to get appealing and tasty food on the table. A new culinary accent and grammar is developing.

As the time of my weekly restock rolls around, there is invariably a good double-handful of raw material in the hamper approaching the end of its edible life span — a handful of cherry tomatoes, some green beans or mushrooms, a bell pepper, half a bulb of fennel. You could look at it as the bottom of the barrel, or as an opportunity for reinterpretation. 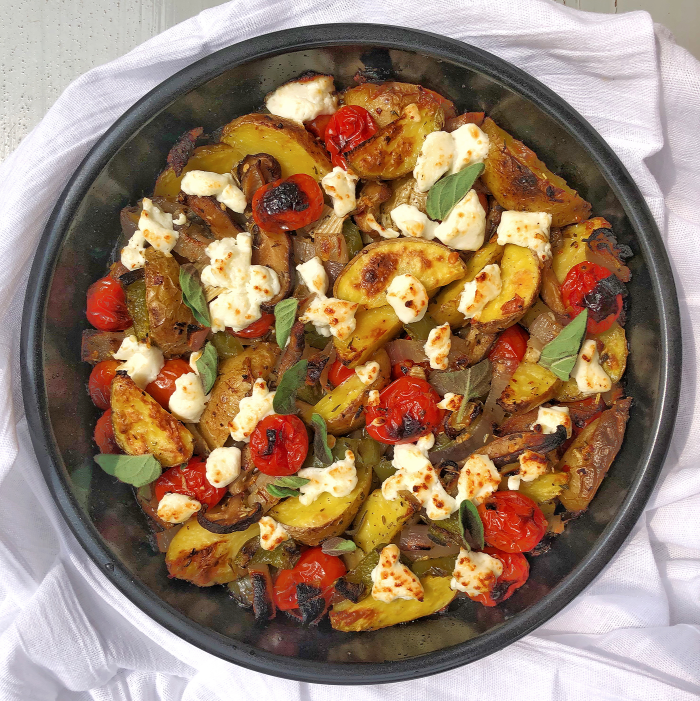 Consider the Provençal tian: Named specifically for the shallow earthenware vessel of its manufacture, it is a baked-vegetable gratin. Common features are onions, garlic, tomatoes, olive oil, herbs, and sometimes cheese or breadcrumbs. To those basics, add potatoes or squash or other seasonal vegetables — green beans, fennel, celery, what have you.

It’s an accommodating dish with nearly universal appeal. Compare Spanish pisto or samfaina, Greek briam, Italian ciambotta or caponata, Moroccan zaalouk, Turkish saksuka and turlu and even Hungarian lecso. Some are saucier, some spicier, but all are humble and comforting.

Since it’s less a recipe and more of a strategy, the only essentials are onions and garlic, a robust olive oil and assertive herb blend. Add to that blend about three cups of fresh vegetables chopped to bite-sized pieces. Tomatoes are always appreciated — a handful of cherry or grape tomatoes, sliced plum tomatoes or chopped and seeded garden tomatoes.

The version you see here has quartered baby Yukon potatoes and sliced mushrooms, but again, use what you have. Shredded or chopped cooked pork, poultry or other meat or even seafood can turn this into a main course, but it’s a satisfying vegetarian main course or side dish as is.

The cheese is as optional as it is flexible. Toss some breadcrumbs with a little olive oil and sprinkle them as you would the cheese. A sprinkling of chopped fresh herbs is a perfect final touch. Let the ingredients speak for you — it’s all about the inflection.

Serves two, plus some

Heat oven to 450 degrees. In roasting pan or shallow casserole large enough to hold about 4 cups, toss the onions, garlic, other vegetables and dried herbs with a couple of generous glugs of robust olive oil; salt and pepper to taste. Roast for about 40 minutes in preheated oven. Remove and dot with the cheese, then return to the oven and roast for another 5 to 10 minutes. Switch the oven to broil and cook for two to three minutes to just barely brown the top vegetables and cheese. Remove from oven and garnish with a sprinkle of fresh herbs if using and another drizzle of olive oil. Serve warm.