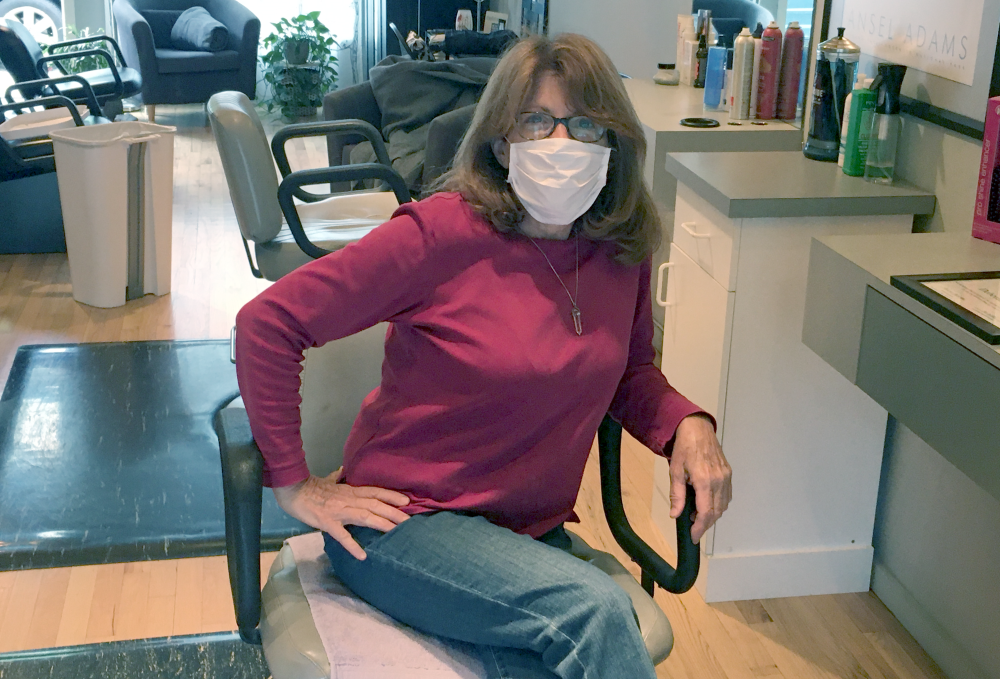 Deb MacLeod in her Nelsonville salon (Photo by L. Sparks)

On March 28, she planned to mark the 20th year of Deb’s Hair Design, the salon she owns on Main Street in Nelsonville. The anniversary was postponed when Gov. Andrew Cuomo ordered nonessential businesses to close, effective March 22, to slow the spread of COVID-19.

“I didn’t make it,” said MacLeod, who served her last customers on March 21.

Her march toward 20 years could resume on Tuesday (June 9). On June 4, Gov. Andrew Cuomo said the Mid-Hudson Region, which includes Putnam and Dutchess counties, is on track to move to Phase 2 of the state’s four-stage reopening plan. That will mean barbers and salons can reopen, as long as they maintain social-distancing and everyone wears masks.

Car dealers, real-estate offices and professional firms such as architects will also be allowed to reopen, and Cuomo on Wednesday (June 3) said restaurants will be able to offer outdoor service as long as the tables are 6 feet apart, all staff wear masks, and customers wear masks when not seated.

Phase 2 also will loosen restrictions for retailers, allowing them to have customers come inside to shop as long as capacity remains at less than 50 percent.

In Phase 1, which began in the Mid-Hudson on May 26, construction projects and manufacturing were allowed to restart; agricultural, fishing and hunting businesses opened; and retailers could have customers pick up orders.

A cut, but no shave

“I’m ready to go back to work,” said Lucky Longo, who owns A Lucky Cut in Beacon and plans to open on July 1. “It’s felt like a year already.”

Under Phase 2, barbers and salons can only serve customers who make an appointment. Walk-ins are not permitted, unless they can be served immediately. The state is also requiring barbers and stylists to keep at least 6 feet space between chairs and eliminate waiting areas.

In addition to buying hand-sanitizer dispensers and placing stickers on the floor to remind customers about mask and social-distancing requirements, Longo removed one of her three chairs. In Nelsonville, Deb MacLeod has also repositioned her shop’s chairs.

At Barber and Brew in Cold Spring, the three barbers will work in rotation six days a week, said James Caroll, a co-owner. Appointment slots will expand to one hour from 35 minutes to avoid having a customer arrive while the person ahead of them is still in the chair.

Barbers will sanitize between each cut and have to take and report their temperature before starting a shift, Caroll said. Both he and Longo said their services will be limited to the scalp, with no shaves or beard trims.

During the shutdown, real-estate agents shifted from meeting potential buyers at properties to “virtual” showings. Under Phase 2, agents will be able to again show clients properties, although only those that are unoccupied or vacant.

Agents will have to stagger showings so potential buyers are not congregating inside or out. Everyone must wear masks, and gloves will have to be replaced or cleaned and disinfected between showings.

Before the shutdown, agents such as Bill Hussung, the owner of Robert A. McCaffrey Realty in Cold Spring, reported a huge demand in local properties from New York City residents seeking to move north because of COVID-19.

Demand remained “tremendous” even after showings moved online, he said.

Despite the allowances of Phase 2, the New York State Association of Realtors has issued preliminary guidelines that discourage in-person showings, Hussung said. Its final guidelines will be released today (June 5), he said.

“We have to take all the precautions, we have to be safe, we have to protect the community and we also have to help people,” Hussung said.

While professional offices will be allowed to reopen in Phase 2, their occupancy will be limited to 50 percent of capacity.

Social distancing is not possible for firms with small offices, such as River Architects in Cold Spring. Co-owners Juhee Lee-Hartford and James Hartford said they will continue to communicate remotely with staff, which includes four full-time architects. “We have pinch points up and down the stairs and in our kitchenette, which truly makes it close to unworkable,” said Hartford.

A bottle of hand sanitizer sits on a stand by the front desk. Outside, on a chalkboard sign, Chevtaikin has spelled out his rules: up to four customers at a time, masks required.

Getting ready to reopen Archipelago has required some work, he said. But so did being closed. His Instagram and Facebook pages had to be updated each day. He responded to customer inquiries with photos, and sometimes the dimensions, of items.

“I would come in four to five hours a day to do that every single day while I was closed,” he said. “It wasn’t bad, but it’s not the same as when you’re open.”

Last week, under Phase 1, Chevtaikin and other local businesses reemerged to a new normal, with requirements for social distancing, face coverings and the monitoring of employees for COVID-19 symptoms.

“It’s going to take a while for people to get used to, but that’s the way it is,” Chevtaikin said.

On Route 9D, Unicorn Contracting had an exemption during the shutdown to complete the outside of a 28-unit building at the Residences at Butterfield in Cold Spring. Work restarted May 26 on the inside and is expected to be complete in October, said Paul Guillaro, Unicorn’s president.

Masks and gloves are mandatory, no matter the distance between workers, he said. While contractors are required to check the temperatures of workers before they arrive at the site, Unicorn has a doctor who goes through the building at least once or twice each day to check on workers, including spot checks.

“We’re being extra cautious to make sure that only people that are healthy are on the job,” he said.

In Beacon, Baxter Built, a Poughkeepsie-based developer and construction company, resumed work on a 28-unit condo project at 245 Main St. Because of the shutdown, the project is more than two months behind schedule, said Anthony Petruzzelli, a project executive.

Carpenters, electricians, plumbers and other trades workers returning to the project will find new rules. “It’s important that we follow these guidelines and keep everybody safe,” Petruzzelli said.

At The Country Goose in Cold Spring, Leonora Burton has a hard-to-miss poster in the window that she custom-ordered from Grey Printing. “Shop Local, Shop Safely,” it reads.

Burton, whose brother-in-law in England died of complications of COVID-19, remained open during the shutdown because she sells food. But sales dropped dramatically, and she had to lay off her sole employee. 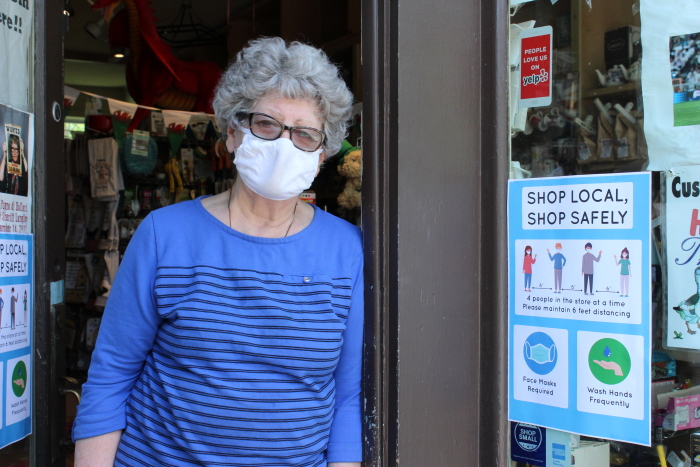 Although she will be able to allow customers to browse inside The Country Goose in Cold Spring during Phase 2, Leonora Burton said she remains wary. (Photo by L. Sparks)

She said she will limit access to two customers at a time, and no one can touch anything.

“Until things get cleared up, I’m not anxious to get back to the old touchy-feely,” she said.

Shana Wilensky and her family, who sell jewelry, antiques, home décor and collectable action figures from After Eden in Beacon, have ordered a stand to hold hand sanitizer but are too concerned about a second wave to allow customers inside, even for pickup and drop-off.

Reopening is “exciting,” Wilensky said, but for now, customers have to pick up items outside.

“I would love to reopen soon; I miss my customers,” she said. “But also, it’s nerve-wracking; it feels like a big responsibility to make sure that we have a safe environment for people.”