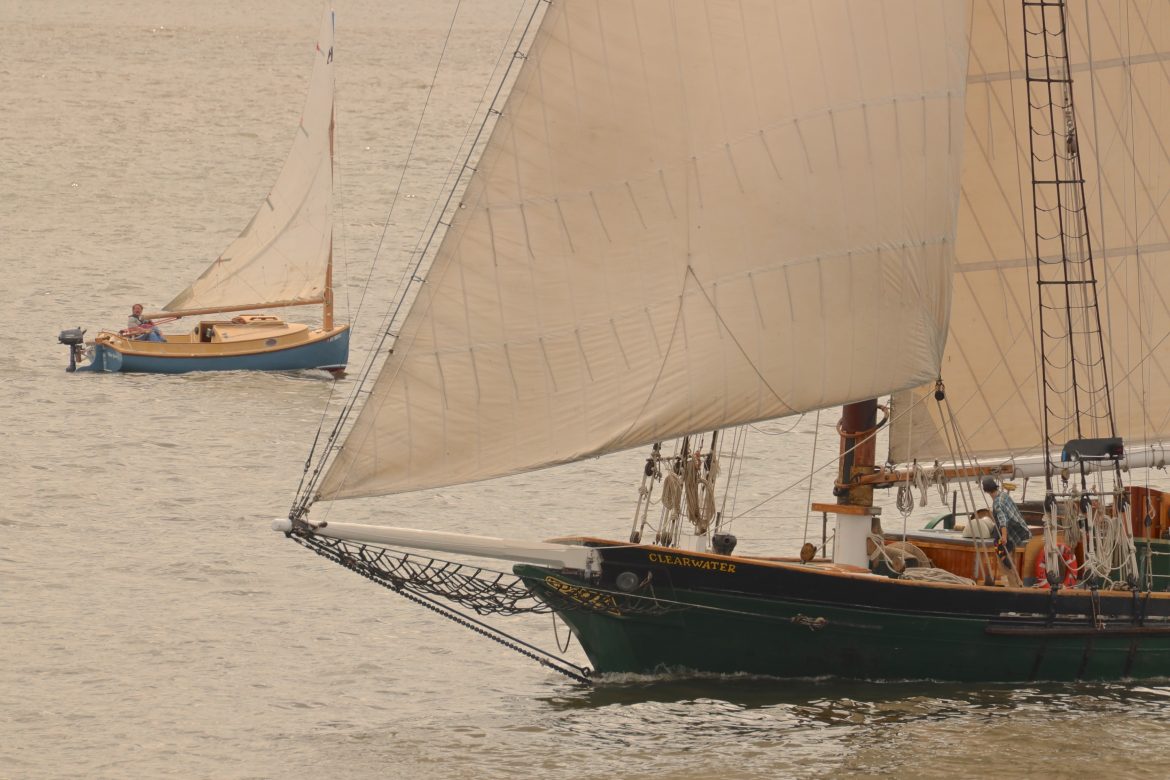 The Clearwater took a short trip on May 17 from Kingston to Rhinecliff and back with half of its usual 18-person crew. (Photo by Ross Corsair)

After three years as an engineer on the Clearwater, Amy Nelson was named one of the captains of the iconic sloop in November.

Then the pandemic hit, half the sloop’s crew was furloughed and public sails and educational trips for schoolchildren typically organized by the Beacon-based nonprofit fell overboard.

“We all scrambled, asking ourselves what to do,” Nelson said. “We were starving to give the community some sort of hope and inspiration.”

On Monday (June 22), the sloop embarked on a two-week trip from Albany to New York City, which is unlike any other the Clearwater has taken in its 51-year history. Billed as “Our River Connects Us,” the trip aims to bring the river to people around the world with daily livestreams on Instagram and Facebook that include family craft activities.

The ship’s progress can be tracked in real time at clearwater.org/orcu. It was scheduled to arrive in Beacon on Thursday (June 25) before making a 90-minute sunset sail to Cold Spring today at 6:30 p.m. It plans to reach New York City on Thursday (July 2).

During an overnight stop on Wednesday at Waryas Park in Poughkeepsie, Nelson gestured to a tangle of power strips and charging cords connected to a nest of smartphones on the deck that are used for the livestream.

“We’re on a sailboat, we’re moving, the mics aren’t loud enough, the audio is choppy because we’re live,” she said. “We’re having to become tech whizzes at the same time as sailing the boat and taking care of her, which is a full-time job in itself.” 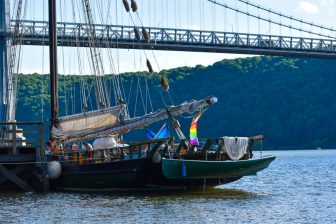 The Clearwater, docked on Wednesday June 24 at Waryas Park in Poughkeepsie (Photo by B. Cronin)

Despite some technical difficulties, Nelson said the sail is allowing Clearwater to reach a new audience. She said the crew has heard from former crew members who haven’t sailed on the boat in 40 years but now can do so virtually, as well as people who are fans of Clearwater founder Pete Seeger.

“We’re trying to get people in the Hudson Valley excited,” Nick Rogers, the sloop’s other captain, said earlier on Wednesday as the sloop passed Esopus Island. “There are reasons to be hopeful, and there are reasons to keep going,” despite the challenges of the pandemic.

While Nelson oversees the sailing, Rogers handles other necessities, such as organizing donations made to the crew, including sunscreen, fruit and Gatorade. “One person wants to deliver us pizzas,” he said.

Nelson said the crew has been humbled by the support of residents of river communities who don’t usually see the Clearwater on the river, which is so narrow between Albany and Kingston the sailing there is difficult for a 100-foot sloop. 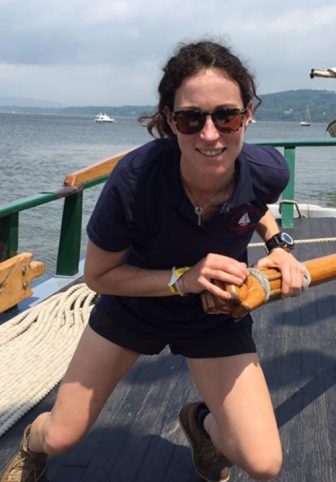 “You can only sail 45 degrees off the wind, so by the time you catch the wind at a 45-degree angle and catch enough speed to tack [turn into the wind], you’re out of river,” she explained. So far, the wind has been steady and the weather has been pleasant, so the crew had only needed the motor for about five minutes, she said.

While docked, crew members go ashore to videotape interviews with people whose lives have been shaped by the river for a series called Voices of the Valley. Subjects have included Basil Seggos, the head of the state Department of Environmental Conservation, Shabazz Jackson of Greenway Environmental Services, and Pete Malinowski of the Billion Oyster Project.

The pandemic has been tough for the organization, which depends on its educational sails and the 10,000 passengers it typically carries annually for revenue. The annual Great Hudson River Revival festival this year became an online concert. There is hope that, before the Clearwater is hauled out of the water at Kingston to be stored for the winter, the crew might get in a few public sails.

“We understand that environmental education on a tall ship doesn’t seem like the most important thing now,” Rogers said. “There are important things happening in terms of [addressing] systemic racism, and the coronavirus, and those should be more at the forefront. But if we can be a symbol of hope in the background, that would feel good to us.

“This may sound trivial, but someone who was kayaking by us the other day said that it was good to see us out on the river,” he said. “That meant a little bit more this year.”