A friend took delivery of one of the most beautiful hauls of fresh fennel I’ve ever seen — way more than she could mentally or physically process. As a known and notorious lover of the vegetable, I was the grateful beneficiary.

My go-to method for dealing with such a gift is to fire up the oven and roast, but this payload was more than that could handle. These specimens sported luxurious clouds of feathery fronds that absolutely had to be good for something other than window dressing.

I thought of pesto, another accommodating go-to formula that can showcase almost any tender, herbal greens. A search began. Sure enough, The Cuisine of the Sun, Mirielle Johnson’s 1976 compendium of informal seasonal cooking from Nice and Provence, held a recipe new to me and at once familiar and exotic: saussoun.

Saussoun is an almond, anchovy and fennel spread or paste meant to grace croutons/crostini as an hors d’oeuvre, or alternatively as a sauce for pâtes aux oeufs (i.e., egg noodles). Johnson’s recipe calls for the addition of mint or basil, but it used only the fennel bulbs, leaving the fragrant fronds as garnish. 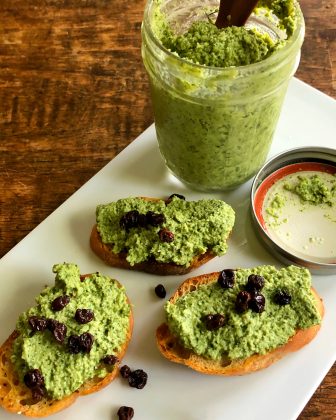 I was amazed at how little there was to be uncovered from Google, but further sleuthing uncovered a recipe for something called lou saussoun that deleted the fennel. A more encouraging find suggested equal parts fennel bulb and fronds, which meshed much better. Plus, the ingredient list in this rendering was reminiscent of Sicilian pasta preparations melding fennel, sardines (not unlike anchovies), pignolis and currants, and also suggests or veritably demands the inclusion of garlic.

The version here is a composite saussoun further modified with parsley for color (and to soften the garlic), as well as a splash of lemon juice to add brightness. This saussoun benefits from relaxing in the refrigerator overnight, and like basil pesto will keep for a bit. Also like basil pesto, it’s an admirable utility player. Some suggested uses:

As an hors d’oeuvre or appetizer: Johnson suggests spreading saussoun on crostini with additional shaved fennel and chopped mint, and a drizzle of olive oil. Consider an additional garnish of shaved hard cheese or, as shown in the photo as a nod to the Sicilian recipe, a garnish of garlic-and-vinegar macerated currants.

For fresh crostini: Slice a fresh baguette in ¼-inch thick diagonal slices, brush with olive oil and a sprinkling of salt and pepper and bake for 5 to 7 minutes per side at 375 degrees.

For the currants: Soak ¼-cup dried currants (you can substitute raisins, regular or golden, but currants are just better) in 2 to 3 tablespoons of white wine vinegar with a smashed clove of garlic for an hour or so. Remove the garlic and drain the currants/raisins before using.

As a dip or dressing: Serve saussoun as a dip for raw vegetable — radishes are particularly sympathique — or for lightly cooked and chilled green beans or favas. Make a cold salad of cooked, chilled cannellini beans with shave fresh fennel and red onions; dress it with saussoun thinned with a bit more olive oil and/or lemon juice.

For pasta: Use it as you would a basil pesto as a sauce for the pasta. Reserve some water from the pasta pot before draining and add a splash to the saussoun as you toss it all together. Finish with another splash of olive oil, more fennel fronds or grated cheese or toasted bread crumbs in the Sicilian style. You might even add some of the macerated currants from above, or drained and roughly chopped canned sardines.

With meat or seafood: Saussoun also makes a sterling seasonal accompaniment to grilled or roasted lamb, chicken, pork or fish, particularly in combination with more fennel — maybe roasted or braised — and tomatoes.

Put all ingredients except the oil into a food processor and process to a coarse paste; add oil and process until incorporated. (Add more oil at your discretion to achieve your desired consistency.) Season to taste with salt and pepper. Refrigerate covered for a couple of hours to let the flavors develop. Bring to room temperature before serving.

* To blanch whole raw almonds: bring a saucepan of water to a boil and add then whole almonds. Boil for a scan minute and drain immediately, cooling them under cool running water. Drain and allow to dry slightly before peeling the brown skins (which should slide off handily). Toast briefly in a hot skillet or oven until barely colored. Cool before proceeding with the recipe.