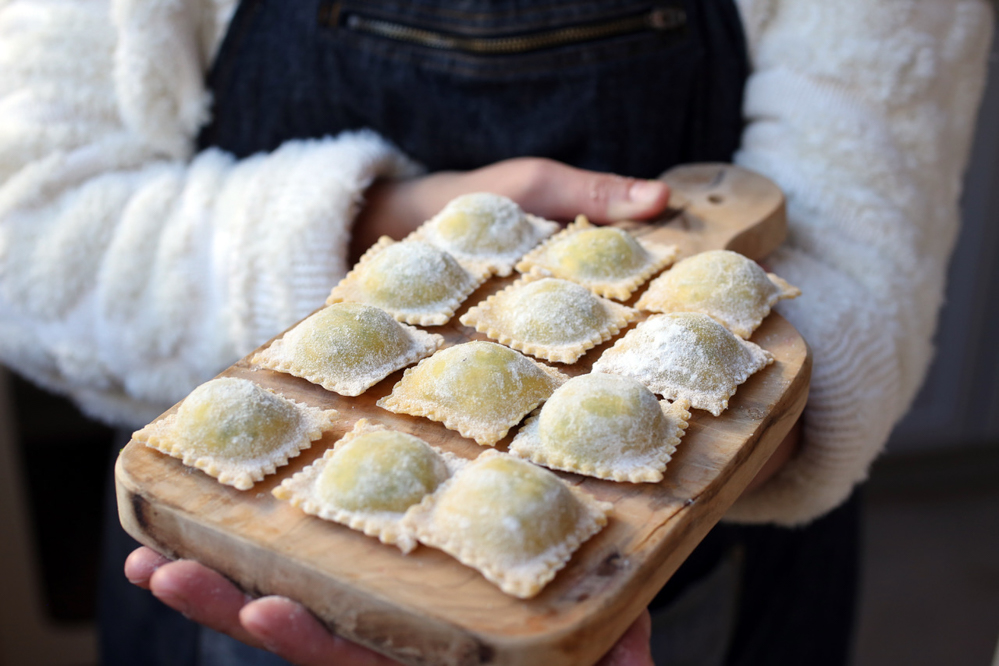 Ravioli made for a pop-up event (Photos by Doug Schneider)

The co-founders, Elizabeth Reyes and her husband, Shawn Crosby (who are in the process of changing their surnames to Creyes), began with a simple plan: They would cook and sell specialty broths, grain bowls and other dishes made by Reyes, who studied at the Orlando Culinary Academy, which is associated with Le Cordon Bleu. 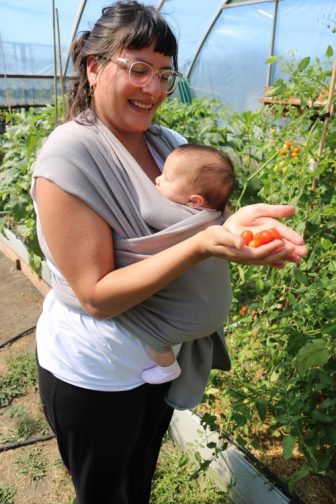 Because Reyes was then pregnant with their daughter, Lila, they thought they would keep their venture a step up from a hobby and sell their products only at farmers markets. But the business grew quickly, which the couple says has been good but a bit overwhelming. They are planning two pop-up shops in front of Marbled Meats at 3091 Route 9 in Philipstown from 6 to 9 p.m. on Thursday (July 23) and Aug. 6.

In addition, the couple hopes to expand soon to six farmers markets and hire a sous chef. They recently opened a Friday farm stand at Sky Blue Stables in Cortlandt near the Blue Mountain Reservation.

Reyes says she is eager to get back to cooking. After graduating from OCA in 2003, she returned to her native Miami, then moved to New York City and took a job at a Japanese restaurant, Sumile.

“That’s why a lot of my special dishes have a lot of Japanese influences,” she explains. “Plus, my best friend growing up was Korean, and I learned a lot of that cuisine through her family.” Reyes also worked in the kitchens and/or helped open Tertulia, the first Little Neck and Ammazzacaffe in New York City, and was executive chef at Cafe Paulette in Brooklyn.

Reyes says she translates many of the Cuban- and Nicaraguan-inspired recipes passed on through her family. “There were family gatherings every single weekend,” she says. “It made always being around food fun for us.” 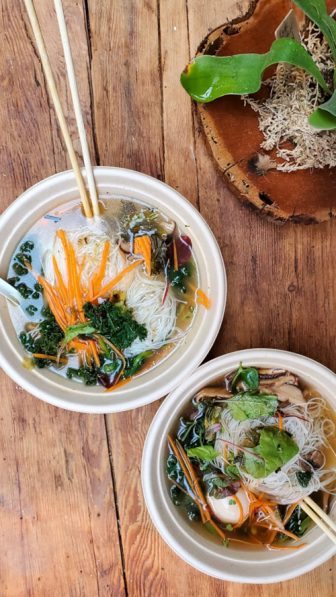 Her signature dishes are grain bowls and a “broth bowl box,” which she describes as “like a ramen kit, using everything fresh: microgreens, pickled eggs — everything is sourced; we don’t just go to the supermarket.” The broth — bone or mushroom — serves as the base.

Some of her other, family-inspired dishes include her spin on Cuban black beans and cumin and coriander-seasoned authentic tamales; empanadas filled with picadillo, olives and raisins; crispy rice; and a chimichurri sauce.

The couple launched their farmers market plan in Peekskill in 2018 after moving from Brooklyn to Cortlandt Manor. They met Chris Pascarella of Marbled Meats while searching for bones to create their broths, and he offered to rent them commercial kitchen space. 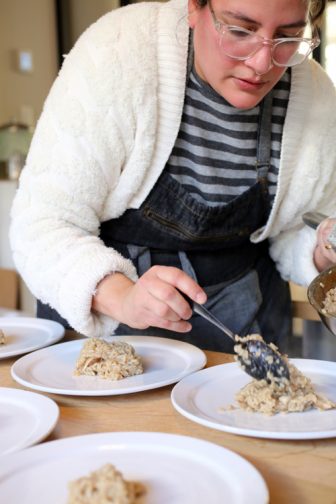 Reyes plating a dish at a pop-up event

“It was a big jump for us, but a natural progression,” Crosby says.

And then, cue pandemic, and with it the closure of most markets.

“Our first pivot was in March,” Crosby recalls. “A lot of folks at the market lost that stream of revenue, so we asked if we could aggregate their products on our website [at twobirds.studio]. We’ve turned into an online grocer, doing deliveries of very specific products. All the usual food-delivery companies like Fresh Direct were backlogged, so we filled that void.”

“A lot of smaller producers have done well” during the shutdown, notes Reyes. “People have turned to CSAs and livestock farms for their eggs and chickens.”

“We’re super-excited because we have a business that’s doing well — a lot of people don’t have that luxury,” Crosby says.