The Environmental Protection Agency intends to move residents and destroy as many as 10 arsenic-contaminated homes in Kent — 33 years after the hazard was discovered.

The federal plan focuses on properties on Gipsy Trail Road where the soil has elevated arsenic levels from abandoned mines. The EPA said it will offer to buy the homes and property and also pay for the residents’ moves.

Once vacated, the homes will be demolished and the agency will begin a years-long process to investigate the extent of the contamination, said Sonia Mohabir, an EPA representative. Environmental easements will be placed on the parcels to limit their use, she said.

For homeowners who decline the money and elect to stay, the EPA will continue to apply the short-term remedies it began last year to mitigate the effects of the contamination, including water monitoring, providing indoor and outdoor mats and boot brushes, creating woodchip or stone walkways, and paving driveways.

The EPA estimates the remedial cleanup will cost $5.83 million. It is being assisted by the state’s departments of health and environmental conservation. Representatives at those agencies referred questions to the EPA. 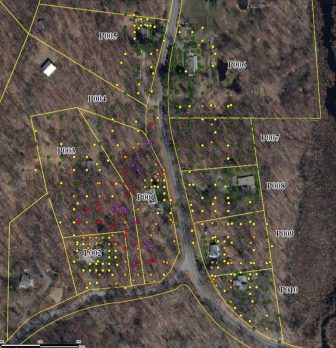 A map created by the EPA shows the parcels on the Superfund site in Kent. The red and purple dots indicate the test sites that had the highest arsenic readings.

The Kent site was placed onto the EPA’s Superfund National Priorities List in 2019. It’s the third Superfund site in Putnam County, along with the Brewster Well Field, in which volatile organic compounds from a dry-cleaning business were found in the village water system, and the former site on Kemble Avenue in Cold Spring of Marathon Battery Co., which discharged contaminated waste into Foundry Cove during much of the time it operated between 1952 and 1979.

The cleanups of the Brewster and Cold Spring sites have been completed but the EPA continues to monitor them. The EPA removed the Marathon Battery site from its National Priorities List in 1996, although as recently as 2018 the agency found that groundwater there still showed signs of contamination.

The culprit at the Kent site is a series of abandoned arsenic mines in operation throughout the 1800s and again during World War I. Two shafts still remain: the northern one is located on private property and the southern one is in the state’s Ninham Mountain Multiple Use Area. 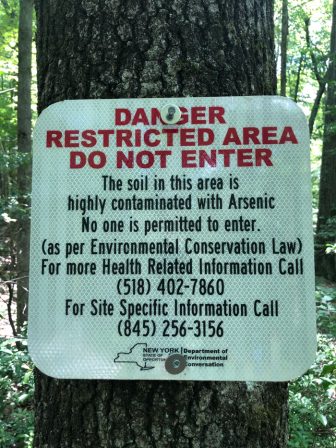 Signs on Ninham Mountain warn hikers not to go off-trail (Photo by B. Cronin)

In 1987, residents living adjacent to the northern shaft were stricken with arsenic poisoning and had to be hospitalized. Investigation showed their drinking water well had been drilled into tailings from the mining operation. A cistern was installed by the EPA to replace the well and a warning sign placed at the mine entrance.

In 2016, the property owner asked the EPA to repair the cistern. During that process, the agency said, it found that the groundwater was still contaminated. Further testing revealed the arsenic levels in the drinking water at 10 sites were unsafe and that the soil had nearly 1,000 times more arsenic than what would trigger removal.

In the years since then, the state has posted signs along the lower elevation trails at Ninham Mountain warning hikers not to go off-trail because of the pollution.

Despite the high contamination levels, the EPA only recently moved the site to its National Priorities List, which allowed the cleanup to begin. Sen. Charles Schumer visited Ninham Mountain last fall and blasted the agency for the delay, accusing it of dragging its feet on the issue for more than 30 years.

For those who don’t live on the affected properties or hike the lower trails, the EPA said there was no reason for concern.

“To EPA’s knowledge, there should be no site-related health risks or hazards for people who are not in direct contact with contaminated soils,” Mohabir said.